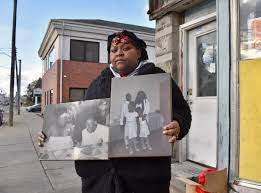 A manhunt for the suspect in the stabbing death of 36-year-old David Royes Jr. triggered a lockout order for more than 3,000 students across the West Side of Binghamton on Dec. 2. Among...
by Zach Freeman January 5, 2022 314 Views

A manhunt for the suspect in the stabbing death of 36-year-old David Royes Jr. triggered a lockout order for more than 3,000 students across the West Side of Binghamton on Dec. 2. Among them were his two daughters, ages 12 and 13, who did not yet know their father had been killed.

Their mother, Shakeema Ward, broke the news to them when she picked them up from school after the lockout was lifted.

“Thank you God the kids were in school — that’s all I keep saying,” Ward said.

Ward, Royes’ wife of 18 years, recounted the grim details of the morning before near the ad-plastered window of the corner store beneath her apartment, where she ducked inside to escape whipping winds and 25 degree December air the day after the murder.

“I just wanted to say I’m so sorry for what happened,” said a woman who introduced herself as the owner of the boutique next door, squeezing Ward’s arm. “He was a good man, yes he was.”

A steady stream of patrons buying sodas and cigarettes asked the store’s proprietor what happened, jerking thumbs toward the apartment entrance where crews in white hazmat suits still swarmed.

“I don’t know,” he told them over the clang of coins in the register drawer, shaking his head.

That morning, Ward, who works second shift as a certified nursing assistant at Bridgewater Center for Rehabilitation and Nursing, had just lain back down on the couch in the living room of the family’s third-floor apartment at 110 Main St. when 29-year-old Mitchell C. Lindow arrived around 9 a.m., according to police.

Though she had never seen Royes’ alleged assailant before, she surmised he was at least acquainted with her husband, and likely called or texted Royes that he was at the back door because he answered it without a knock.

If the suspect had knocked, the family’s two dogs, a pug and a cockapoo, would have barked in response.

“My husband opened the door and out of nowhere, the guy just started stabbing him,” Ward said. “He was like a rabid dog that just wouldn’t stop.”

The Binghamton Police Department said Lindow used a “bladed object” to stab Royes repeatedly. Your stories live here.Fuel your hometown passion and plug into the stories that define it.

Ward said she watched her husband stagger through their apartment, clutching at walls and furniture in their living room for support as Lindow continued to stab him. The assault continued throughout the apartment and down to the second floor, where Royes bled all over the hallway, the floor and their neighbor’s door.

Instinctively, Ward ran out the front door and into a neighbor’s apartment, where the police were called.

“I just unlocked the door and ran,” she said. “I didn’t even look back.”

A year of loss

Royes’ murder came on the tail of a tragic year for his family.

The couple’s seven-month-old nephew died of leukemia in June, less than two weeks before Royes’ father died of cancer. The following month, Ward found her own father dead in his apartment.

Ten days after Royes’ death, his mother, Sherri Black, suddenly fell ill at her home in Baltimore, Maryland, and died on her way to the hospital.

Although the family was told there was “no clear cause of death” for the otherwise healthy 61-year-old pastor, author and real estate investor, Ward said she was told her mother-in-law told ambulance personnel that “she couldn’t live without her son or the thought of what happened to him.”

A double funeral was held at the family’s church in Brooklyn, three days before Christmas.

Ward said her husband had no inkling that such violence awaited him that morning.

“If he did, he would have never opened the door,” Ward said.

The family, who moved up from Brooklyn seven years ago as a means of “starting over,” kept mostly to themselves, Ward said.