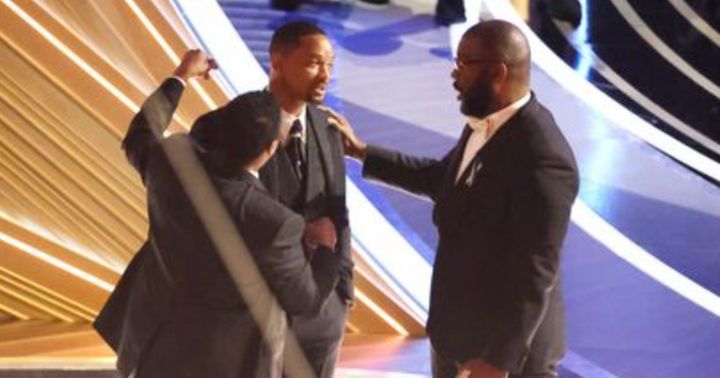 “I left early to go and check on Chris [Rock] because it was wrong in no uncertain terms,” Perry says of the moment immediately following the Oscars slap heard ’round the world.

Tyler Perry was one of the men reported often as having spoken to Will Smith in the immediate aftermath of him slapping Chris Rock at this year’s Oscars telecast, with many believing he was comforting the pending Oscar winner.

Perry says that instead he was walking a very fine line in an extremely tough situation for him, as a friend to both men involved. Smith slapped Rock over a joke at Jada Pinkett Smith’s expense and then screamed profanities at him from his front-row seat.Jor

“There is a difference between comforting and de-escalating,” Perry said during a discussion with Gayle King at the Tribeca Film Festival, per Variety. He was hesitant to talk about the slap heard ’round the world, predicting that it would dominate headlines afterward.

Nevertheless, knowing that his first-hand experience of that moment was of general interest, Perry did talk a little bit about what happened from his point of view.

“I was there, close up. I left early to go and check on Chris because it was wrong in no uncertain terms and I made sure I said that to Will,” he told King.

As for Smith, he said it was clear the actor was “devastated; he couldn’t believe what happened.” He added, “I think he is very much in reflection of trying to figure out what happened.”

“And I’m looking at this man, in his eyes going, ‘What are you doing? This is your night,'” Perry continued. “And to get all this way to winning an Oscar. It was one of the crowning moments of his career that he wanted so desperately.”

As many have done in the weeks and months since the attack, Perry alluded to the passage in Smith’s memoir “Will” where the actor talks about “not being able to protect his mother at eight years old.”

As for Rock, Perry called him “pure champion the way he handled it.” Struggling again with having friendship and respect for both men, Perry said that it was also “extremely painful” for Smith.

“It’s no excuse, he was completely wrong, but something triggered. That was so out of everything he is,” Perry explained.

After the slap, Smith won the Best Actor Oscar, delivering an awkwardly-received apology of sorts. He would later apologize more directly. The Academy of Motion Picture Arts & Sciences ultimately banned Smith from all Academy events for a decade, including the Oscars.