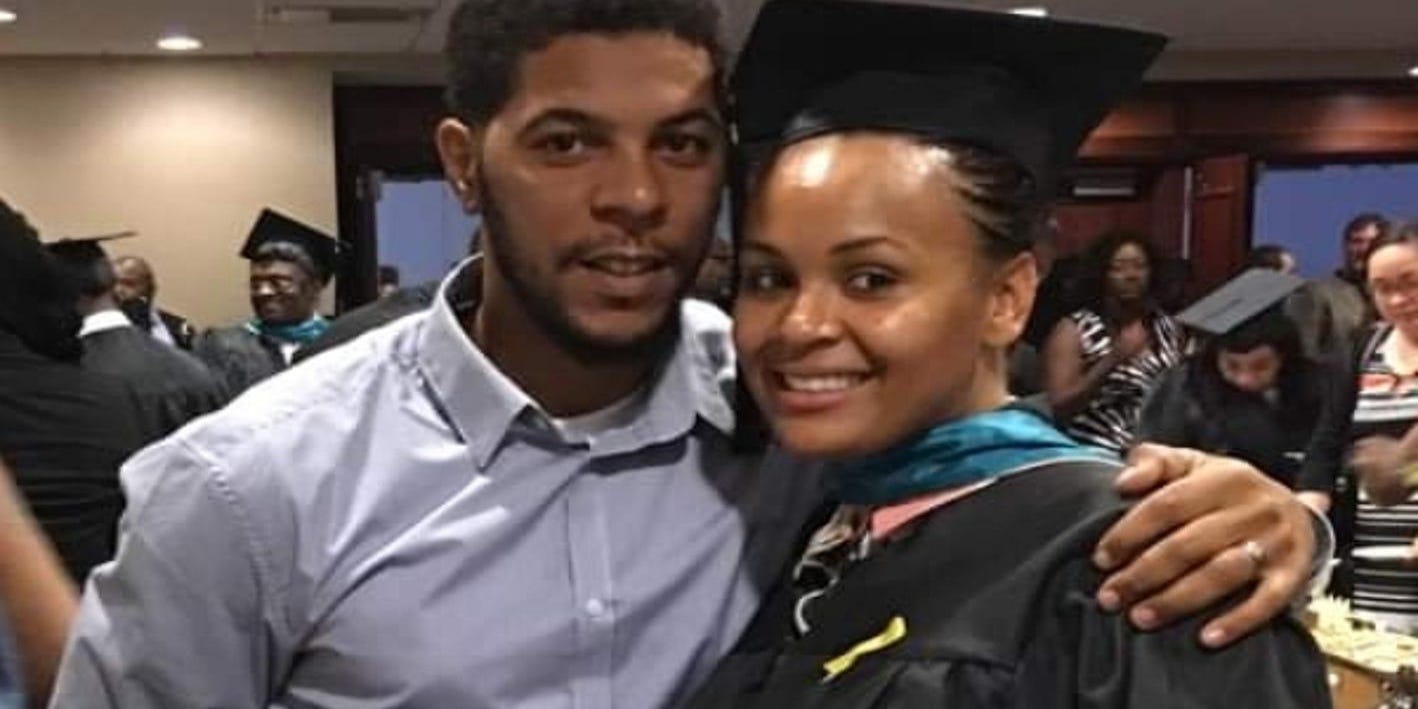 Kathleen Edwards, the widow of Gregory Lloyd Edwards a combat veteran who died in Brevard County Sheriff’s Office custody, and whose family has brought civil rights lawsuits over his death, turned herself in to the Volusia County Jail Wednesday morning on a charge of aggravated manslaughter of a child.

The charges stem from the death of her toddler son in July 2020. The 18-month-old child was in a coma for several days after he was found in the pool of the family’s Grant-Valkaria home. The child died after the decision was made to take him off life support.

The child’s grandmother and Gregory Edwards’ widow called 911 around 9 a.m. June 28, 2020. The family believed the child was going to play in the playground outside but instead found him in the pool, which had a tarp-like covering.

Deputies and medical technicians gave the child CPR at the scene. The child was transported to Lawnwood Regional Medical Center in Fort Pierce in critical condition where he was placed on life support. The toddler died a few days later.https://4ded3e6ed929b592f2074b292e473966.safeframe.googlesyndication.com/safeframe/1-0-38/html/container.html

“The death of a child is a devastating event and carries with it an emotional burden unlike any other. As a society, we understand that sense of loss, but we also charge law enforcement with the duty to determine if any abuse or neglect contributed to the death,” State Attorney Phil Archer said in a statement issued today.

“The decision to prosecute is always difficult, but the evidence in this case overwhelmingly revealed that this tragedy was entirely preventable,” Archer said. Eating out for Easter? Here are places across the Space Coast offering special mealsSenators push to restart U.S. cruises as some lines plan to base ships offshoreRestaurant review: Food at Apollo Diner in Melbourne excelsGun raffle for Astronaut High School graduation event sparks outrage and supportDivine Mercy Catholic Academy closes to ‘merge’ with nearby schools

Eiglarsh said she turned herself in to the Volusia County Jail, choosing that venue, he said, to avoid the Brevard County Jail, which she believes killed her husband. Edwards had previously expressed concern about her safety in Brevard and worried she would be targeted for retaliation for speaking out about her husband’s case.

Eiglarsh expressed disbelief that State Attorney Phil Archer pursued the charge following the Sheriff’s Office investigation into the child’s death, and said he had provided exculpatory evidence to Archer to consider.

“His (Phil Archer’s) refusal to speak to a key witness who could exonerate my client concerns me.”

More:Lawsuits against Sheriff’s Office and West Melbourne filed over death of Gregory EdwardsYour stories live here.Fuel your hometown passion and plug into the stories that define it.Create Account

According to Eiglarsh, Edwards’ son was being cared for by the grandmother who was staying at the home and said that if the state attorney’s investigators had spoken to her, they would know that.

“This isn’t one of those scenarios where, well we learned later in discovery, that (Kathleen Edwards) wasn’t the caretaker… he knew all of this, I put it in writing,” he said.

Archer’s office did not immediately respond to Eiglarsh’s comments.

According to Eiglarsh in the weeks leading up to the drowning incident, both family and neighbors had been taking care of Kathleen and her son. Edwards appeared emotionally distraught at a town hall meeting after a rally in Cocoa that drew over 3,000 protesters calling for police reform and for the release of her husband’s jail custody video.

Eiglarsh said that Kathleen’s mental health had deteriorated as a result of the death of her husband in Sheriff’s Office custody and a surprise “wellness check” visit by Sheriff Wayne Ivey to her home well after dark just 12 days prior to the drowning.

After the visit, a sometimes sobbing Edwards told a gathering of neighbors and family that she was rattled by Ivey turning up at her home unannounced.

Ivey, who said he was concerned about Edwards’ emotional well-being, recorded the visit on audio and distributed it to the media later. He also offered to show her the video depicting the confrontation at the jail that led to her husband being hospitalized before dying.

Edwards was sexually abused when she was in the military, and served in Iraq where she suffered a brain injury from a rocket-propelled grenade attack. The incident left her diagnosed with PTSD as a result. She was nine months pregnant with her son when her husband died in Sheriff’s custody and delivered the child at the couple’s Grant-Valkaria home.

“So when the sheriff shows up unannounced to give her this hug which made her feel like she was metaphorically raped, those are her words. It was so uncomfortable for her that she deteriorated, her neighbors … and her family said that after that visit, she got 10 times worse,” he said.

“That was a horrible thing for him (Sheriff Ivey) to do, even though it might have been well-intended.”

On the day of the incident the grandmother had assumed total responsibility for Kathleen Edwards and her two children, over the objections of Kathleen Edwards, who was appreciative of the help from her neighbors, Eiglarsh said.

The morning in late June, “the kid found his way into the pool because of the grandmother’s negligence, mere negligence, not culpable negligence, and there’s a huge difference under the law,” he said. “She’s accepting full responsibility for her mere negligence.”

“I certainly don’t see any valid basis, lawful basis to bring these charges.”

“I’m not going to say whether I think this is payback or anything like that I’m going to leave that for people to speculate. My client thinks obviously it’s retaliatory… I just can’t understand why somebody would bring charges like this.”

Represented by Ben Crump, the Edwards family on Dec. 8, 2020 sued the Brevard County Sheriff’s Office, the City of West Melbourne and then-health contractor for the jail Armor Correctional in state and federal court over the death of Gregory Edwards.

Edwards, who served as a US Army combat medic in Iraq and Kosovo, was arrested by West Melbourne Police on Dec. 9, 2018, during what his wife Kathleen described as an “episode” related to his PTSD after he assaulted a charity worker in a Walmart parking lot.

Edwards was taken to the Brevard County Jail where he got into an altercation with a corrections deputy in booking. The fight involved multiple deputies and resulted in Edwards being tased, handcuffed behind his back, placed in a restraint chair with a spit hood over his head and pepper spray still on his face. He was then wheeled into a holding cell, unattended.