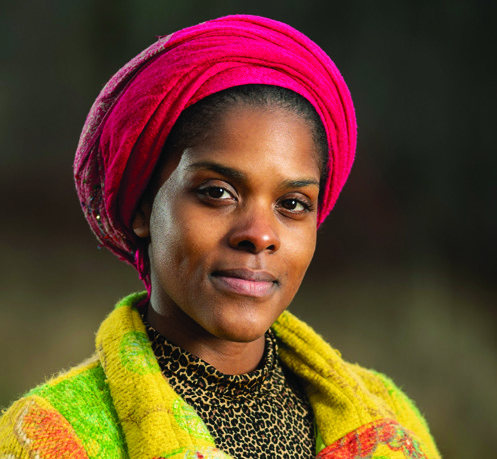 Police are asking for help finding a black BMW that may have been involved in the death of 35-year-old Nicole Mokeme.

A South Portland woman who worked to empower and support Black and Indigenous people through retreats in nature was killed by a hit-and-run driver at Acadia National Park over the weekend, police said.

Nicole Mokeme was the founder of Rise and Shine Youth Retreat in Bowdoin. Gregory Rec/Staff Photographer

Maine State Police announced the death of Nicole Mokeme on Monday afternoon and said it is believed to be an isolated incident. They are asking for help in finding a black BMW that may have been involved.

The 2016 BMW X3 SUV with Maine license plate 5614WM is registered to 35-year-old Raymond Lester of Portland, police said. The vehicle may have damage to the front end or undercarriage. Anyone who sees it is asked to call police and not to approach the car.

The search for the vehicle was continuing Monday night, said Shannon Moss, spokesperson for the Maine Department of Public Safety.

Mokeme was the creative director of the Rise and Shine Youth Retreat, which offers wellness retreats and other programs for Black youths and adults. She was one of the organizers of the Black Excellence Retreat 2022 at the Schoodic Institute in Winter Harbor when the hit-and-run occurred sometime between Saturday night and early Sunday.

The retreat was the second held in collaboration with the institute and was described as “a getaway for Black folks and their friends and families of all backgrounds to join together in community to celebrate Juneteenth, liberation and Black excellence,” according to a post on the retreat’s Instagram.

The retreat was scheduled from June 14 to 20 and was designed specifically to give Black youth and adults a laid-back time for deep rest, outdoor exploration and art. She partnered on the retreat with the Racial Equity and Justice Organization and other activists.

“She was always planning the next thing on how to bring community together to heal and build,” said Desiree Vargas, co-founder and co-director of the Racial Equity and Justice Organization. “She was a light to everybody.”

Mokeme was featured by the Portland Press Herald in 2020 as a “Mainer to be Thankful For.” She told the Press Herald at the time how she fell in love with camping during her first trip and started a camping weekend getaway for teens of color.

SHARING THE OUTDOORS AND WELLNESS

“When we think of wellness or yoga, we usually think of white women. I wanted young Black women to see Black women, who are a little older than them, in this field and sharing wellness,” Mokeme said.

The website for the Rise and Shine Youth Retreat says she founded the program in 2014. It grew over the years to include a farm and retreat center in Bowdoin that offers cooperative living, outdoors programs, retreats and a plant share. Mokeme, who used to live in Bowdoin, said she wanted to create a diverse community of teenage girls who celebrate themselves and support one another. Over the years, it expanded to include people of all ages.

“This work provides the BIPOC community a place to gather, a place for fellowship,” she told the newspaper in 2020.

In a question-and-answer with Mokeme posted on the website for Coastal Enterprises Inc., a nonprofit community development financial institution, she described how Rise and Shine evolved to become a place for Black, brown and Indigenous people to develop leadership skills, build confidence through outdoors experiences and create a sense of community.

“It brings me so much joy to see people of all ages running through the woods and experiencing complete bliss,” Mokeme said.

The directors of the Racial Equity and Justice Organization said they did not want to discuss the details of her death or speak about the investigation. They instead wanted to lift up the work she did for many organizations in Maine to bring people together and especially to connect them with the outdoors.