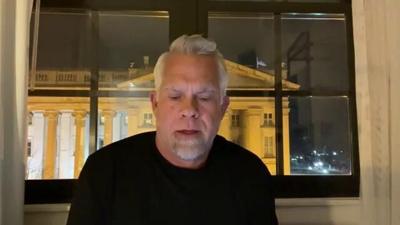 Pastor Seen At DC Riots Has Stepped Down As Senior Pastor

The pastor of Grace Chapel where Gov. Bill Lee attends announced Sunday that he’s transitioning away from senior pastor. Steve Berger made the announcement during services on Sunday morning....
by Zach Freeman January 18, 2021

The pastor of Grace Chapel where Gov. Bill Lee attends announced Sunday that he’s transitioning away from senior pastor.

Steve Berger made the announcement during services on Sunday morning.

“This has been a three-plus year process that started in 2017. Steve and Sarah felt the calling to expand into the ministry opportunities that were opening up to them,” said Mark Bright, Executive Pastor at Grace Chapel, in a statement. “We were going to make today’s announcement on August 9, 2020, but based on conditions and challenges brought about by the Global Pandemic, our leadership team agreed that we would delay the announcement until January 2021 when presented our annual ‘State of the Church’ address.”

Bright said the church brought back Rob Rogers, who had previously been on the staff, in November 2018 to prepare him to take over as lead pastor.

“Over the last two years, we have been announcing the increased visibility that Rob was going to have while also talking about Steve’s new ventures,” Bright said.

Berger is listed as Founding Pastor on the church’s website.

The announcement Sunday came on the heels of media scrutiny after Berger posted on social media the claim that Antifa was partially to blame for the riots at the U.S. Capitol.

Berger was in Washington, DC, for meeting prior to the riots on Jan. 6. He said he walked back through the National Mall that morning praying for America. He said he was back in his room by 11 a.m.

In a written statement, Governor Lee’s pastor apologized for sharing information that was deemed later to be inaccurate about the Washington D.C. riots.

In a Facebook Live from Washington on the evening of Jan. 6, Berger reported that a facial recognition system had identified Antifa activists in the Capitol and a report that Antifa was being bussed into the capital. Both were later reported to be incorrect.What’s your money mindset?Take our quiz to discover your money mindset – and start building your financial toolkit. Check off small financial to-dos today.Ad By Regions Bank See More

Berger issued a statement on Jan. 9 apologizing for reporting misinformation.

“Trying to accurately share information, while events are rapidly unfolding, has its challenges. When you find out that sources you deemed legitimate, were mistaken, you need to right the wrong,” Berger said in a statement released on Jan. 9. “Therefore, I apologize for sharing things that were wrongly being reported by multiple outlets. I, in no way, intentionally misled or would mislead anyone.”

During a service on Jan. 10, Berger specifically took aim at The Tennessean and News4 for its reporting of his activities in Washington, DC.

“Unfortunately, the news media has absolutely lied through their teeth,” Berger said during the service.

“When you announce some changes, some transition in the midst of kind of being under attack in the press, it can make it look like you’re responding to that attack and running with your tail between your legs. I can assure you that nothing could be further than the truth from that,” Berger said.

He also referred to WSMV as “the devil” during the service.

A Baptist Church Mourns The Lost Of Their Pastor On Saturday