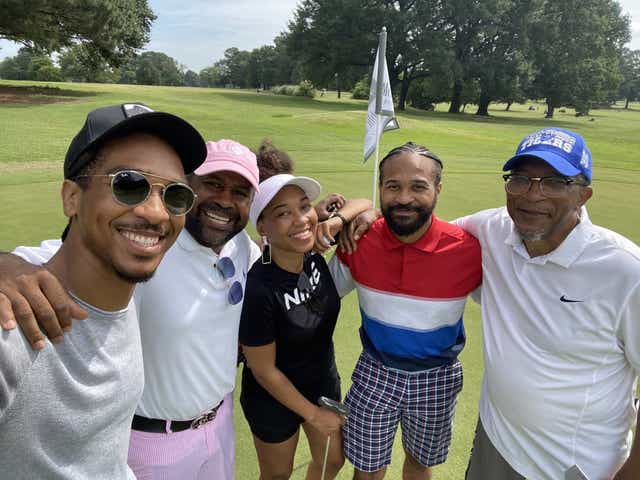 Breckenridge was the pastor of the New Mt. Sinai Baptist Church for eight years. Among his duties was being a transportation coordinator who would help deliver food to the homeless on Thanksgiving Day. His colleague, Pastor Keith Norman, will remember him as a “servant hearted person” and “an advocate for justice.”

He died of an undiagnosed illness that the Breckenridge family was in the process of learning about the illness at the time of his death.

Tereasa Breckenridge and DeWayne Breckenridge’s relationship began on a blind date 35 years ago. She said a mutual friend invited them on a double date to the local Ruby Tuesday and afterward the two went to a movie — “Gremlins” to be exact. Breckenridge said she was working at Federal Express at the time, so she arrived late to the dinner.

“I was about three hours late getting to them,” she said. “By the time I got there, he was sitting down with his suit jacket off and tie undone. When I got to the table, he had this look like, ‘Let me just get through this.'”

She said he was not especially talkative until she asked him if he was related to her pastor at the time. Lo and behold, his father was her pastor.

“He just cracked up because I was scheduled to be at his father’s church the next day. So after the date, it went on from there.”

DeWayne Breckenridge worked with insurance companies throughout his life. During the aftermath of Hurricane Andrew, he moved down to Miami where he addressed Black families who were treated unfairly when they filed claims.Your stories live here.Fuel your hometown passion and plug into the stories that define it.Create Account

“DeWayne was such a pure-hearted advocate for justice that he would do what was good and right by people to help make them whole,” said Pastor Keith Norman, one of Breckenridge’s colleagues. “He was ‘the adjuster.’ He would right the scales to help give people hope.”

Beyond his work as a pastor and insurance adjuster, Breckenridge was an avid Memphis Tigers and Grizzlies fan. He was also a little league coach and had a passion for golf.

He is survived by his wife; Frankey, Christyn, DeWayne II, and Matthew — his four children; and two granddaughters. His sons and daughter took him on a golf outing for Father’s Day which Tereasa Breckenridge said was “unforgettable” for him.

“The three boys took him out to the golf course [for Father’s Day]. They were having a wonderful time and he kept saying this is the best Father’s Day ever,” she said.

In the end, Breckenridge and Norman believe that DeWayne Breckenridge will be remembered for his love for God and willingness to serve. Tereasa Breckenridge said that he lived his life in accordance with a quote from John Wesley: