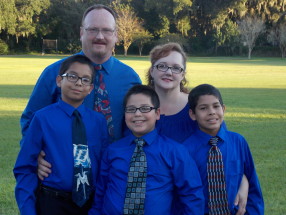 Pastor Richard Counts was not in his pulpit at First Baptist Church of Alturas on Sept. 19. Instead, he sat among the congregation at a Lakeland church led by his son-in-law.

Rather than hearing his wife, Lora, playing piano during a service, as he had for eight years at his church in Alturas, Counts heard recorded music. Lora, leader of the youth program and women’s ministry at the Alturas church, had died two days earlier of COVID-19 at age 60.

Counts said he didn’t think he would be able to handle preaching that Sunday morning. But he didn’t want to be absent from church. So he listened as his son-in-law, Gavin Croft, pastor at Webster Memorial Baptist Church, delivered a sermon.

“It was very emotional, but my wife would have wanted me there,” Counts said. “She’d be there playing the piano, if the tables were turned.”

First Baptist of Alturas is one of several Polk County churches that have endured losses of pastors or leaders during the resurgence of the COVID-19 pandemic fueled by the emergence of the delta variant.

At the Revolution Church of Lakeland, two sons of Lead Pastor Rusty Herrington will be leading services following their father’s death in late August.

The congregation of First Baptist Church of Lucerne Park in Winter Haven is trying to carry on after the death of their pastor, Rev. Charles Chatman, on Aug. 29.

At Calvary Baptist Church in Winter Haven, Pastor Ed Roberts delivered a sermon last Sunday titled, “What To Do When the Bottom Falls Out,” less than seven weeks after the death of Pastor Wayne Roberts at age 58.

“We’ve had other pastors who we thought might be on that list, but they have recovered and are in the process of recovering,” Petty said. “So it’s hit pretty hard.”

Counts was busy on Friday preparing a memorial service to be held Monday for Lora. The program will include the playing of her favorite hymn, “In the Garden,” and the Lauren Daigle song “Trust in You,” which contains these lines:

Richard Counts, 61, said his wife had decided not to receive a COVID-19 vaccination before she became sick

“She did not get a shot,” Counts said. “I got a shot and got COVID — the same day she was diagnosed, I was diagnosed, and I did OK and she didn’t. She was up in the air because, of course, all the media — ‘This is bad for you; this is good for you’ — and she just wasn’t sure. And so we hadn’t convinced her to get it yet, but she was considering it. So she wasn’t dead-set against it, but she hadn’t gotten it yet.”

Counts said he and his wife both fell ill in late August. He doesn’t think she contracted the virus at any church event but instead at family gatherings following the death of her granddaughter, Lily Johnson, in a vehicle crash Aug. 18 in Lakeland.

Lora Counts is shown with her husband, Richard Counts, the pastor at First Baptist Church of Alturas. Lora Counts died recently of COVID-19 at age 60. She was the church’s pianist and led its women’s ministry.