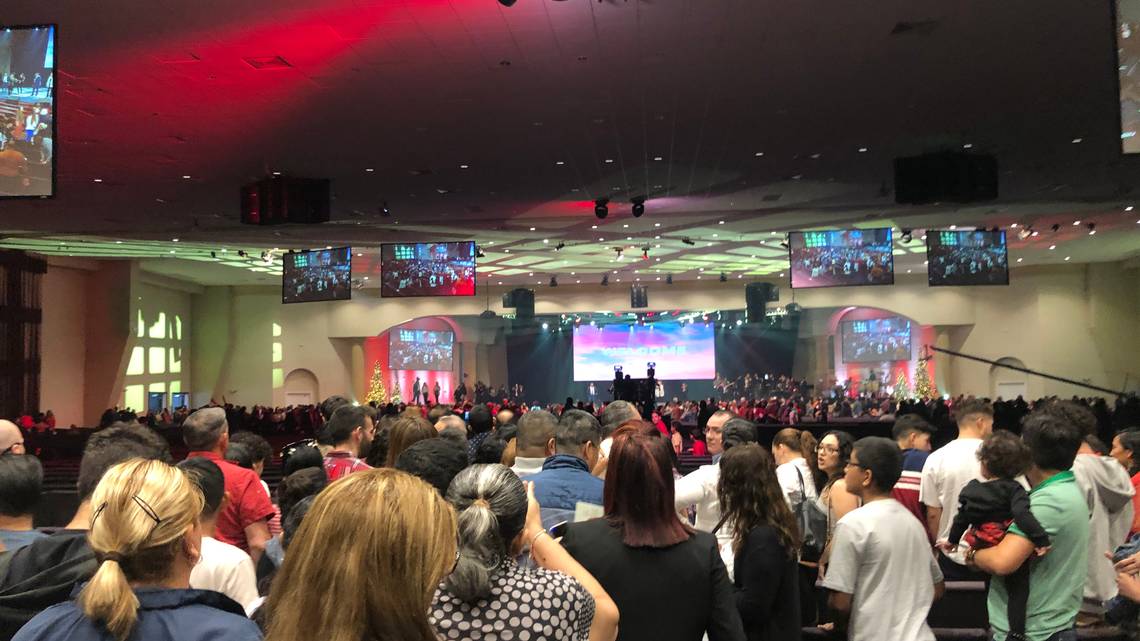 A pastor at a Hispanic church in Homestead raised concerns about the implications of getting vaccinated against COVID-19, warning his congregation about the “mark of the beast” and the specter...
by Zach Freeman February 11, 2021

A pastor at a Hispanic church in Homestead raised concerns about the implications of getting vaccinated against COVID-19, warning his congregation about the “mark of the beast” and the specter of a “satanic, totalitarian” government coming to power. At times, images of horned beasts and microchips being inserted inside peoples’ bodies with syringes were projected on a big screen behind him.

Albert Ixchu, a founding pastor of the Iglesia Fraternidad de Fe — the Brotherhood of Faith Church — made his comments during a Sunday sermon delivered on Jan. 17, a streamed video of the Spanish-language service shows.

A former Fraternidad de Fe parishioner, who asked to remain anonymous because he has relatives heavily involved in the church, told the Herald that the pastor’s assertions related to the vaccine are “going to cause some dangerous situations.”

“My family has already said they will refuse the vaccine. Their friends, people of the church are saying the same already as well,” he said. “I haven’t seen my family in person since this COVID thing started, and it’s looking like I won’t be seeing them for quite a while after learning of this.”

The remarks from this, and a few other, South Florida congregations come even as efforts to mobilize against vaccine misinformation include influential players within the Hispanic evangelical community nationwide.

The Rev. Dr. Gabriel Salguero, an Orlando-based pastor who heads the National Latino Evangelical Coalition (NaLEC), a network of thousands of faith institutions that includes several South Florida churches, says his organization has teamed up with the Ad Council, a nonprofit that produces public service announcements, to create an educational campaign targeting Hispanic evangelicals. The goal is to explain why it’s important to be vaccinated, and dispel misconceptions about the vaccine.

“I think that people have the right to ask questions. We need to facilitate people’s questions being answered. If we are able to use our pulpits and our platforms for trustworthy information in collaboration with the health experts, I think we can help our community,” Salguero said.

“We are pastors, we cannot and should not engage in conspiracy theories,” he said. “We must [make] an intentional, transparent effort based on two things: the truth and the science — and then let people make up their minds.”

In South Florida, however, at least one advocate for immigrants says that the concerns about the COVID-19 vaccine that her organization has heard from the community have been “mostly religion-related.”

“They are saying it’s la marca del diablo, the mark of the devil,” said Lis-Marie Alvarado, program director of American Friends Service Committee, a Quaker-affiliated immigrant nonprofit that has helped bringfree COVID-19 testing clinics to the county’s rural areas. “[That] if you get it, you will be controlled, and you are pretty much giving your life to Satan. How can you fight that?” Alvarado said.

“For most people, their pastor’s words are God’s words.… They have so much influence,” she said.

Other examples of the anti-vaccination rhetoric heard in Miami-Dade churches in recent months:

▪ In December, megachurch pastor Guillermo Maldonado made international headlines when he told his congregation at Miami’s King Jesus International Ministry that COVID-19 vaccines would be used to track people and “alter your DNA” — a claim that has been proven false. “Do not [take] the vaccine. Believe in the blood of Jesus. Believe in divine immunity,” added Maldonado, who hosted President Donald Trump in the January 2020 launch of the “Evangelicals for Trump” coalition. Fellow megachurch leader Ruddy Gracia, from Southwest Ranches’ Segadores de Vida ministry, has also made similar comments.

▪ Also in December, Pastor Noe Miniel, from the smaller Iglesia de Dios Pentecostal at 1751 NW 115th St., struck a similar tone in an address to his parishioners. “They say the vaccine is 95% effective. Well, I don’t want to be among those 5%,” he said. “You can get side effects. Some people will die…. This year of the coronavirus has shown that people are capable of sacrificing their freedom for the global system.”

▪ At the Iglesia Cristiana El Deseado de las Naciones, in Homestead, pastor Anibal Flecha used part of his Jan. 24 sermon to criticize media outlets for stoking fears about the COVID-19 pandemic. “Fear is the tool Satan is using to kill people,” he said. “If you get infected, don’t be afraid. God won’t abandon you for a single moment.”

Evidence of vaccine skepticism among Hispanics comes on the heels of a nearly yearlong pandemic that has had an outsized impact on Latin communities, with Hispanics being over four times more likely to be hospitalized for COVID and nearly three times more likely to die than their white counterparts, according to CDC data.

And every day, immigrant workers continue to brave exposure to the virus by disproportionately powering industries deemed essential, from agriculture to healthcare.

In South Dade, many farmworkers who are reluctant to receive the vaccine cite their religious faith as a reason, said Claudia Gonzalez, an organizer in Homestead for the Farmworker Association of Florida.

Gonzalez, who herself is a former farmworker, has spent the beginning of the year surveying Miami-Dade farmworkers in one-on-one conversations to gauge the community’s interest in the COVID-19 vaccine.

So far, she said, she has spoken with around 200 people. About 35% indicated they don’t plan on taking the vaccine, and another 35% have said they weren’t sure. Just 30% indicated they would be interested in getting vaccinated.

Alabama Pastor Is Fighting To Be In The Room With His Member While He Is Executed Today: Courts Denying Him