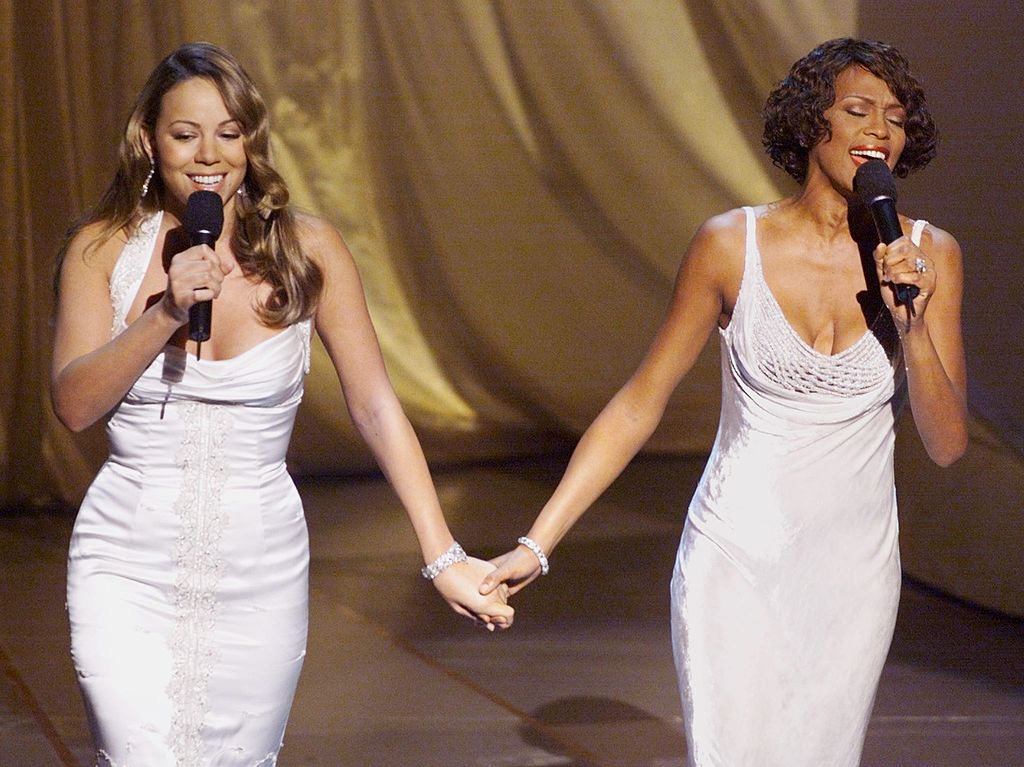 Exactly 10 years ago, pop icon Whitney Houston died at age 48. On Friday, Whitney’s friend and singer Mariah Carey posted a pic of them in the recording studio....
by Zach Freeman February 15, 2022

On Friday, Whitney’s friend and singer Mariah Carey posted a pic of them in the recording studio. She tweeted, “Missing you.” The pic was from the ’90s, when they were recording their hit song “When You Believe,” featured in the movie “Prince of Egypt.”

A few years ago, Mariah opened up on their friendship, telling Variety, “What has to change in our industry the most… is the pitting of women against each other. We didn’t know each other, and she was one of the greatest of all time. And then we finally did a duet together that won an Oscar. We had the best time working together. It was a female camaraderie.”

In another interview with Billboard, Mariah called their recording sessions a “bonding experience.”

Houston was found unresponsive and underwater in a bathtub at the Beverly Hilton, just hours before she was scheduled to attend Clive Davis’ pre-Grammy party.

A month after she died, her cause of death was revealed as accidental drowning, with cocaine use and heart disease as the main contributing factors.

Along with cocaine, “Extra” learned other drugs were in Houston’s system, including marijuana, Xanax, Benadryl, and the muscle relaxant Flexeril, but they did not contribute to her death.

Following the autopsy, Whitney’s body was flown to New Jersey, where she was laid to rest.

Houston’s ex-husband Bobby Brown also made a brief appearance at the funeral but left due to a seating dispute. Bobby and Whitney were married for 14 tumultuous years before she filed for divorce in 2006.

New Hope Baptist Church played a special part in Houston’s life, as it was the church she attended while growing up. Houston also sang in the choir.

Years after she sang in the church, Houston would be discovered by Clive Davis. She went on to become one of the best-selling music artists in history, thanks to hit songs like “I Wanna Dance with Somebody,” “How Will I Know,” “Greatest Love of All,” and “Saving All My Love for You.”

Houston also succeeded at the box office with roles in “The Bodyguard,” “Waiting to Exhale,” and “The Preacher’s Wife.”

Houston wrapped production on her final movie, “Sparkle,” just months before she died.

“Extra” sat down with Whitney for the final time on set, where she revealed that “Greatest Love of All” was the favorite of her songs.

Three years before her death, “Extra” caught up with Clive and Whitney as they promoted her final studio album, “I Look to You.” She revealed, “I had other plans, but he said, ‘No, we’re gonna do an album.’ He professed to me like, ‘Everybody is waiting, everybody wants to hear you sing again.’”

A biopic on Houston is currently in production and scheduled to be released in theaters in November. The film, “I Wanna Dance with Somebody,” will star Naomi Ackie and Stanley Tucci, playing Whitney and Clive, respectively.

Davis, who is a producer on the biopic, praised Ackie’s portrayal of Houston. He told The Hollywood Reporter, “Naomi Ackie’s screen test was so powerful, it sent shivers up my spine. Although Whitney’s incomparable vocals are used for all the songs, Naomi’s extraordinary acting range enables her to masterfully capture Whitney’s unique charm, star power, and, of course, her personal struggles. Naomi is the real deal and I can’t imagine a better choice for this iconic role.”