He stabbed a convenience store clerk 29 times and robbed him for $1.25 judged denied his pastor touching him during his execution

A Texas judge on Tuesday denied a request by a district attorney who called capital punishment “unethical” to withdraw the execution date of a death row inmate whose case had raised... 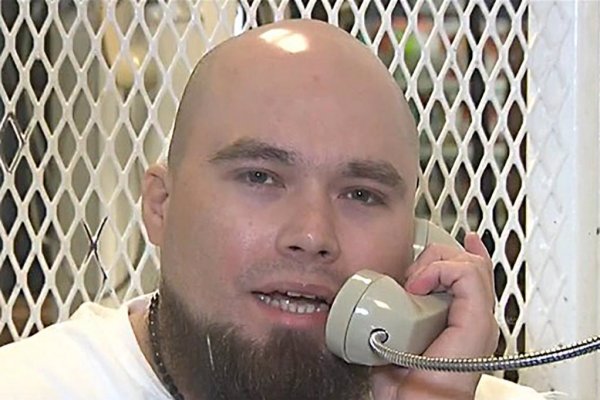 A Texas judge on Tuesday denied a request by a district attorney who called capital punishment “unethical” to withdraw the execution date of a death row inmate whose case had raised legal questions about the role of spiritual advisers in the death chamber.

On April 12, an order was signed setting John Henry Ramirez’s execution for Oct. 5. Ramirez’s execution had been put on hold several times, most recently after the U.S. Supreme Court agreed to review his challenge of state rules that would have prevented his pastor from touching him and praying aloud during his execution.

But two days after a death warrant was issued, Nueces County District Attorney Mark Gonzalez asked for the order to be withdrawn, saying his office mistakenly requested an execution date. In a court motion, Gonzalez said he “has the firm belief that the death penalty is unethical and should not be imposed on Mr. Ramirez or any other person while (Gonzalez) occupies (his) office.”

But during a court hearing over Zoom Tuesday, state District Judge Bobby Galvan in Corpus Christi, who signed the death warrant scheduling the execution, said he believed Ramirez’s case has reached a point at which the setting of an execution date is warranted.

“So, Mr. Gonzalez, I respectfully disagree with you. I’m not sure that I have the power to do so and for that reason I’m not going to withdraw the warrant,” Galvan said.

Ramirez is on death row for killing a Corpus Christi convenience store worker during a 2004 robbery. Ramirez stabbed Pablo Castro 29 times and robbed him of $1.25.

After the hearing, Ramirez’s attorney, Seth Kretzer, said he and Gonzalez planned to file a joint motion appealing Galvan’s decision to the Texas Court of Criminal Appeals, the state’s highest criminal court.

“It is unprecedented for an unopposed/joint motion to withdraw a death warrant to be denied,” Kretzer said.

Gonzalez said he holds Galvan “in the highest regard” and that he’ll follow the judge’s advice to appeal.

“We are in unchartered waters and even judges sometimes welcome guidance or answers from higher courts,” Gonzalez said in a statement.

During a nearly 20-minute Facebook live video in April, Gonzalez said he believed the death penalty is one of the “many things wrong with our justice system.”

“I don’t feel that the government should have that power to put people to death because historically, those individuals that have been put to death have been of color, of low economic status or even low intellect,” Gonzalez said.

In a letter, the Texas Attorney General’s Office said Gonzalez’s “shifting ethical position” was not a legitimate reason to withdraw the order.

Ramirez, 37, had been set for execution on Sept. 8, 2021, but the U.S. Supreme Court blocked his execution and agreed to take up his case to address the role of spiritual advisers in the death chamber.

In March, the court said states must accommodate the wishes of death row inmates who want to have their faith leaders pray and touch them during their executions. Following the high court’s ruling, the Texas Department of Criminal Justice said it would work to grant requests regarding spiritual advisers unless they present a substantial security risk or are “outrageous.”

During Tuesday’s hearing, Galvan wondered what would happen if he refused a prosecution request to set an execution date.

“I could refuse but I don’t think I would have the authority to stop the execution,” Galvan said.

Such a scenario is currently before the Texas Court of Criminal Appeals. Prosecutors in Harris County, where Houston is located, are appealing a judge’s refusal to set an execution date for death row inmate Arthur Brown.

Last month, Houston judge Natalia Cornelio declined to approve a request by prosecutors to set an Aug. 31 execution date for Brown. Cornelio instead granted a request by Brown to find a new attorney who can investigate if he is intellectually disabled and thus ineligible for execution.