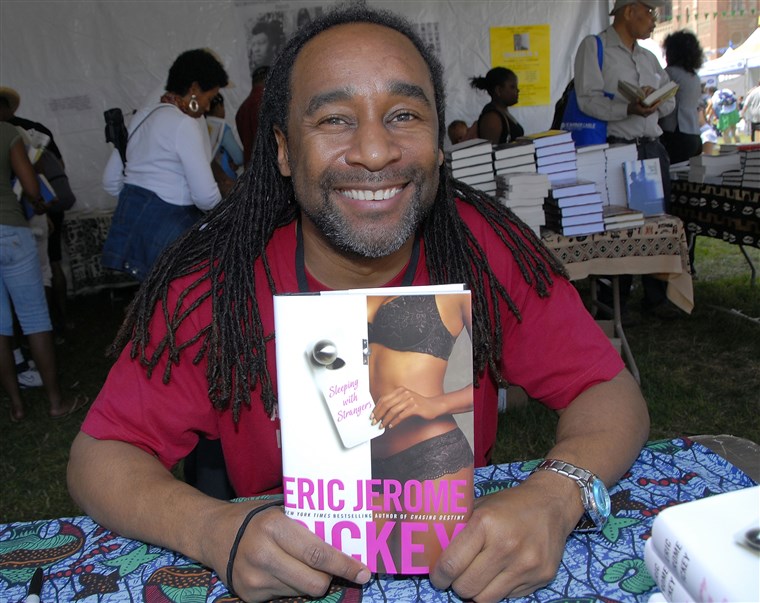 A few years ago, publishing executive Linda Duggins showed up at the National Book Club Conference’s annual event in a knee-high boot cast, the result of a broken foot. Eric Jerome Dickey, the New York Times bestselling author who chronicled Black life and love in his novels, could not bear the thought of Duggins limping around Atlanta.

“I was in front of the conference hotel on the way to one of the many gatherings when Eric drove up,” Duggins, the senior director of publicity for Grand Central Publishing, told NBC News. “He opened the car door and told me to hop in. Most well-established authors are accustomed to car service and media escorts, but Eric assigned himself as my ‘driver’ for the duration of the conference. That’s was Eric.”

That memory came to Duggins as she reflected on the accomplished life of Dickey, who died Sunday from cancer. He was 59.

“We lost a literary giant,” she said, “and a great man. Eric Jerome Dickey was one of the kindest and funniest brother literary rock stars that I knew. His smile arrived well before he walked into any room.”

The wildly popular author lived in suburban Los Angeles and had been battling cancer for the few years, family and friends said.

He underwent a bone marrow transplant in 2019 and was hospitalized for three months. He said he had lost 44 pounds, down to 147, in January 2020. “My college weight,” he joked.

Dickey, an only child raised by his grandmother, had three daughters. A private person, Dickey shared his illness with a select few. His aunt, Carolyn Jerry, said he had been recovering well. But he did not join the family for Thanksgiving; instead, he had a friend pick up a plate for him. When Christmas came, Dickey passed on a plate, which alarmed Jerry.

“I told my husband, Darryl, ‘Something’s not right.’ Eric always would take a plate and freeze it if he had to,” she said. “He had been doing so well, really well. But it was then I got concerned. He said: ‘Auntie, I don’t feel like anything. I’m just going to have soup.’ That wasn’t like Eric.”

A prolific author, Dickey published 29 novels that ranged across genres, including contemporary fiction, romance, erotica and suspense, selling more than 7 million copies in all. He grew up in Memphis and graduated with a degree in computer science from Memphis University, where he was a proud member of Alpha Phi Alpha Fraternity. He lived in Atlanta for years before moving to View Park, California.

Best known for his books “Friends and Lovers,” “Sister, Sister” and “Finding Gideon,” among others, Dickey was too ill in recent years to attend book fairs, where he basked in interacting with his legion of adoring fans.

“I wish I could travel and be there with the crew,” he said of not being up to returning to the National Book Club Conference in 2019. “Those are my beautiful, fun-loving, book-reading, melanin-blessed peeps and the ATL is my second home. This time next year I hope to be much better, laughing and beyond this little pothole that’s trying to slow me down.”

Dickey’s luminous smile and disarming demeanor put fans at ease. His humor, wit and charm made him a reader’s favorite. His work captivated. The New York Times wrote of him: “Dickey’s fans flock to his readings. … He’s perfected an addictive fictional formula.”

He would travel to exotic destinations, like Barbados and Argentina, and live for months as he crafted his next novel.

“Oh, my God, he was a wizard with words,” said Lisa Renee Johnson, an author and book club member in Oakland, California. “I loved how you could feel and see his stories. Locations were a character in his books. And his characters were living, breathing people. Beyond that, though, he was such a cool dude. As a reader, he made you feel like you mattered.”

Dickey worked as a stand-up comic before writing novels. That grew into writing poetry and short stories before expanding to books. In a short time, he became a literary star — but it did not show in his actions.