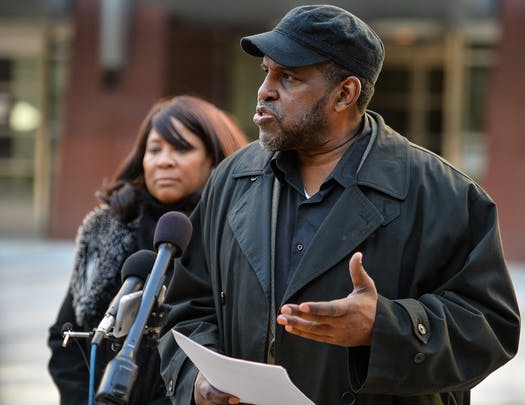 Activist Mel Reeves delivered a prepared statement to the media in 2017 in response to the shooting of 25-year-old Chard Robertson, of Minneapolis, by an Amtrak police officer in...
by Zach Freeman January 7, 2022 194 Views

Activist Mel Reeves delivered a prepared statement to the media in 2017 in response to the shooting of 25-year-old Chard Robertson, of Minneapolis, by an Amtrak police officer in Chicago. To his left, Pastor Theresa Love Williams, the aunt of Robertson.

Mel Reeves, a Minneapolis civil rights activist and journalist who spent decades fighting for social justice, has died from complications of COVID-19.

Reeves, 64, was a fixture at protests and civic events, where he was an outspoken advocate for marginalized communities. He was open about his battle with COVID-19, posting photos of himself in the hospital.

“Mel was a revolutionary,” said Pastor Brian Herron of Zion Baptist Church in Minneapolis, where Reeves once served as part of the church’s ministerial staff. “He was a seeker of justice, not just social justice, but economic and social justice and he cared deeply about developing the activism of young people.”

“He never backed down; he fought for what is right,” said Michelle Gross, president of Communities United Against Police Brutality. “He was a true freedom fighter.”

Reeves worked at the Spokesman Recorder in the 1980s, returning about a decade ago, said Tracey Williams-Dillard, the newspaper’s publisher and owner.

“As an African American, people were more comfortable talking to him than to the mainstream media,” she said. “They recognized the story would be in their voice and recorded accurately.”

Reeves covered the police killings of Philando Castile in Falcon Heights and George Floyd in Minneapolis and wrote his final piece, a recap of 2021, which he tapped out on his cell phone from his bed at Hennepin County Medical Center.

“2021 was supposed to be a rebound from the devastating and stunning losses of the previous year,” he wrote. “Instead, 2021 felt more like the weaker sister of 2020. We were only days into this year when Black folks were startled to see a Black officer empowered to carry out the will of the state, running from a group of white men storming the nation’s Capitol.”

In the week before he died, Reeves gave an interview to WCCO-TV about the ravages of the virus and urged people to get vaccinated. In the interview, Reeves said he wasn’t vaccinated because of an issue with blood clots.

In an oral history provided for the Minneapolis Interview Project, Reeves said he was born the youngest of 13 children in Miami, Fla., and was adopted when he was a year old. He grew up a self-described bookworm.

Wade Hampton, one of his closest friends, said Reeves told him he was bullied as a youth, and no one defended him. He internalized that, said Hampton, and devoted his life to standing up for others.

“I made up my mind I was going to do all I could to make a better world and stand up for those who couldn’t stand up for themselves,” he wrote in a New Year post on Facebook.

Reeves went to Northwestern College, a Christian college in Orange City, Iowa, where he met Hampton, and after graduation moved to Minneapolis where he attended Bethel Seminary. He was married for about three years in the 1980s, fathering a son, Kellen.

Kellen Reeves, of Waukegan, Ill., said his father told him he didn’t choose jobs based on the salary he would earn but on whether it would allow him to have time to do community work.

“I often joke that I grew up on the back of a truck with a bullhorn in my hand,” Kellen said. Later, as a grandfather, Mel would play with his grandchildren, wrestling with them on the floor, taking them to Gopher football games or Chicago White Sox baseball games.

Rev. Jerry McAfee of New Salem Baptist Church said he first met Reeves at a rally against police brutality more than 30 years ago. He found himself in sharp disagreement over the agenda with Reeves and some of his friends.

“We went to the side and had a discussion and discovered that we had more in common than what we had against each other.” It led to a lifetime of collaboration.

“Mel was a closet preacher,” McAfee said. “He was a spiritual guy.” He said a passage from the Bible aptly described Reeves: “Greater love has no man this: to lay down one’s life for one’s friends.”

Reeves returned to Florida for a period to care for his ailing mother before returning to the Twin Cities and to activism and his work at the Spokesman-Recorder.

Civil rights activist Nekima Levy Armstrong first met Reeves in 2013 when he was organizing protests in the aftermath of the shooting death of Terrance Franklin by Minneapolis police. They organized a couple of rallies, involving family members, demanding answers on what occurred, she said. “He had a lot of very positive energy and he was so persistent in pursuit of justice,” she said.

Rashad Turner, who organized the protest, said Reeves was both a friend and mentor. “Mel would say, ‘Justice, then peace,'” Turner recalled. “No one is going to fill his shoes.”

Kenya McKnight-Ahad, a social justice activist, got to know Reeves in 2009 when she ran for city council. In the 20 days that he was in the hospital, she became his contact with the doctors and nurses caring for him. “He appreciated the staff at HCMC,” she says.

Reeves is survived by his son, Kellen, and five grandchildren. Funeral arrangements are pending. An online fundraising effort has been set up for expenses at https://gofund.me/6d3211ba