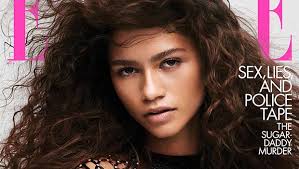 Let’s get one thing straight: Zendaya never likes it when people watch her cry. The irony is that Rue, the drug-seeking teen she plays on HBO’s drama Euphoria, is all about the tears. Between bites of yellow watermelon, she explains that she has to remember not to cover her face while filming. “I always hide my face when I cry,” she says, tossing back her curly brunette locks. “I would cover up my whole performance with my hands if I let myself.” Euphoria—which delves into a generation of overdrugged, hypersexed high schoolers—centers on Zendaya’s character grappling with grief, addiction, anxiety, and depression. “Rue has such a darkness to her, but also an innocence. I have to be super vulnerable and sad in front of people. It’s weird, but cathartic in a lot of ways.”
ADVERTISEMENT – CONTINUE READING BELOW

While sipping a virgin mojito at L.A.’s trendy vegan restaurant Crossroads Kitchen, a favorite of the 23-year-old actress, she orders two more dishes to go along with the watermelon salad. “Did you know there was such a thing as yellow watermelon?” she asks in pleasurable shock. “I learn something new every day.”

Zendaya strips off an oversize hooded sweatshirt that reads “I Am a Voter,” which she found in her mailbox one day. Her playful, sporty style complements her easygoing personality. She fiddles with the $28 hoop earrings she says look dope. Even though she’s dressed down and without makeup for our dinner, her pinstripe trousers are the same ones she wore for the Spider-Man: Homecoming promotional tour in 2017.

Earlier today, Zendaya brainstormed ideas with Euphoria creator Sam Levinson for the second season of the show. “I harass him daily,” she says, half-joking, eagerly awaiting a potential shoot date in January. She tells me she doesn’t know what’s going to happen next, but she would love for her character and model-turned-actress Hunter Schafer’s character Jules to be healthy and find each other again. “Euphoria was eight months of my life, and now that it’s done I’m like, ‘Fuck,’” she says, reflecting back. “You put your shit out there, and it’s a really terrifying thing to do. It’s out for the world to see—it’s so fucking weird.”

“YOU PUT YOUR SHIT OUT THERE, AND IT’S A REALLY TERRIFYING THING TO DO. IT’S OUT FOR THE WORLD TO SEE—IT’S SO FUCKING WEIRD.”

Right now, Zendaya feels as if she needs to decompress and take some time for herself. She’s been continuously promoting her role as Michelle Jones, Peter Parker’s love interest in Spider-Man: Far From Home (with Tom Holland), and she debuted her Tommy x Zendaya spring 2019 collection in Paris this past March (the fall 2019 collection premiered at Harlem’s Apollo Theater in September). She’s also the face of Lancôme’s newest fragrance campaign, Idôle; in a first for her, Zendaya was involved in the development of the scent from early on. Lately, she’s been taking pottery classes and finding time to garden in her backyard. She even took a recent road trip with her mother back to her hometown of Oakland. “Even though Euphoriacoming out was amazing and exciting, it was also extremely stressful. It gave me a lot of anxiety every week,” she tells me.“That’s something I deal with; I have anxiety. I already know after this interview is over, I’m going to spiral about it for weeks.”

Growing up, the former Disney star learned her love for acting from her parents, both former teachers, who encouraged her to pursue her passion even though she was very shy. “I wouldn’t try anything,” Zendaya admits. “I always had this fear of failing and not doing so well.” At 14, she became a household name as a star of the sitcom Shake It Up on the Disney Channel. The family moved from her Bay Area childhood home, located in a neighborhood she describes as “not the nicest,” to Hollywood, and she felt bad about the fact that her mother gave up her career to help her become a star.

When she was 20, Zendaya bought a $1.4 million Mediterranean-style mansion and took control of her career. “I had grown up—I moved out, and it was time for me to be the sole voice in my career and make my own choices,” she says. “I just had too many people I was trying to please, too many opinions, and I was constantly talked out of following my gut and my instinct. I don’t have a road map for this shit—I grew up really, really fast. I learned to trust myself a lot more.”

But that trust also made her cautious. “I never want to mess up. I’m trying to be the best version of myself without overapplying pressure. Then I start spiraling,” she says, her cheeks flushing pink. Zendaya spent hours and hours with Levinson to help develop the character she was playing. “Rue is just a combination of my shit and Sam’s shit, and together we created her. I don’t feel too dissimilar from Rue. It didn’t feel fake to me; it felt like she was me in another version of my life.”

She bows her head, her shoulders moving up and down, until she looks up at me. “I think Euphoria taught me a lot about myself. It made me more confident in my own abilities, because I doubted myself a lot.” Zendaya says that before the show, she didn’t have any work that pushed her or allowed her to be creative. “I was looking for something to prove I can do it,” she says. “Euphoria served as that, in the healthiest way. I never want to plateau as an actress—I always want to be able to explore and push myself. [Being an actress] brings me to places and makes me do things I’d probably never do because I’m such an introverted person.”

Zendaya takes a deep breath and exhales; this interview has the feeling of an intense therapy session. She points out that she keeps repeating the words “I don’t know” and apologizes. “I know, I’m super hard on myself,” she acknowledges. But then, without so much as a blip of hesitation, she tells me that she’s glad people admire her work. “People actually saying I did a good job at my craft…it’s like, ‘Damn, I did work hard. I’m glad you see that.’” She pauses a moment, squirming slightly. “I should finally own that; it’s liberating. I feel lucky.” As with most therapy sessions, she looks down at her phone and realizes time has run out. She hugs me and tells me she’s sorry if she seemed uncomfortable. Like everything else, it’s not so scary once it’s over.