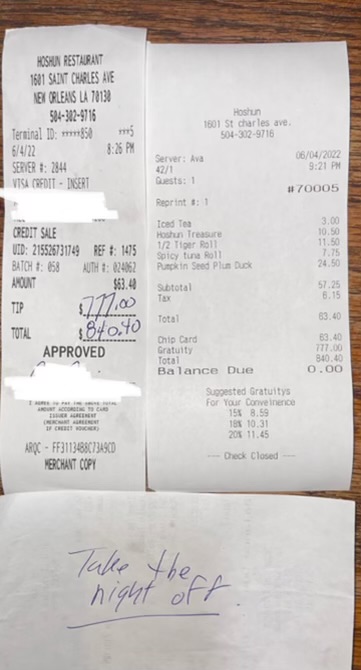 Her prayers were heard loud and clear.

A New Orleans waitress was tipped a whopping $777 on a measly $63 bill, complete with a written note: “Take the night off.”

Ava Guan, a waitress at Hoshun Restaurant, was working over the weekend when she served Abdul Hamideh, a 31-year-old franchise owner of IHOP and Popeyes eateries, who graced her with his generosity.

But as grateful as she was, saintly Guan actually donated the tip in its entirety to her church — Olive Church in Jefferson Parish — to which she had already given $300 earlier that day. They had been in desperate need of a new air conditioner, which was a costly expense.

Guan said she prayed a miracle would happen, hoping the church could somehow come up with the money. Then, in walked Hamideh, who had a generous wallet.

“I think everybody needs an angel,” Guan said. “I think God listens and will help you.”

According to WDSU6 News, Hamideh had the intention of blessing someone with a generous act that day — nothing that the number 777 is a lucky one for him, not realizing it is also a spiritual number. He told NOLA.com he was just “happy to help a neighbor.”

“I can’t believe,” said Guan, who at first thought the tip was a mistake. “I think it was God [who] gave me the gift.”