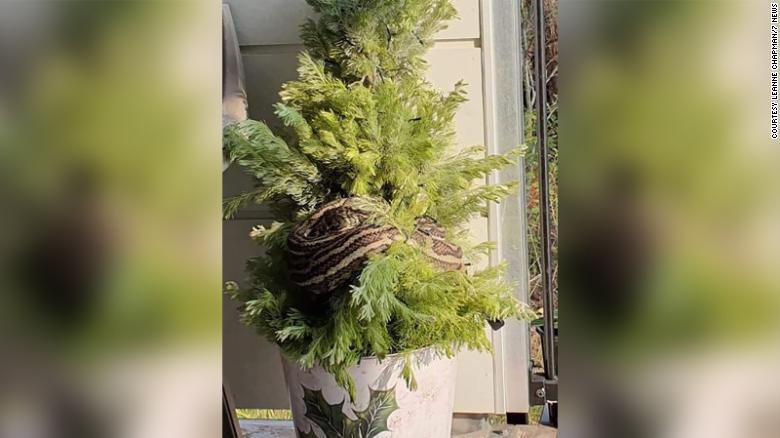 Leanne Chapman was alerted to the python’s presence by birds “kicking off on the balcony.” There are many ways to decorate a Christmas tree — from monotone minimalism to old-school kitsch.But...
by Raquel Jayson December 13, 2019 173 Views

Leanne Chapman was alerted to the python’s presence by birds “kicking off on the balcony.”

There are many ways to decorate a Christmas tree — from monotone minimalism to old-school kitsch.But for one woman in Australia, the seasonal theme was very big snakes, when she got home to find a 10-foot python adorning her tree.Thick bushfire smoke blankets Sydney, causing air pollution to rise 11 times above ‘hazardous’ levelsLeanne Chapman and her partner returned to their home in Brisbane, Queensland on Thursday, and noticed a commotion on their balcony.”We came home from work and there’s a couple of butcher birds that visit every day and they were just kicking off on the balcony, going crazy,” Chapman told CNN affiliate 7News.

The snake eventually slithered away.Chapman, who is originally from England, told 7News that her partner started to video the birds, and leaning on the tree — not realizing what lay wrapped around it.”As he’s turned around and stepped back, he didn’t realise he was leaning on the Christmas tree with the snake wrapped around it,” she told 7News.Snorkeling grandmothers reveal large deadly sea snake population in popular bayThe couple left the snake alone, and later that night, it slithered away.”It wasn’t bothered by us. It just stayed there for a good few hours as we watched it through the window,” Chapman said.It was only when the reptile moved from its position that the couple realized how big it was.”It was big — really big,” Chapman said.”After the initial shock wore off, it was a really beautiful snake,” she said.”It was actually quite nice to see it that close up because I’ve never seen anything like it before,” she added.