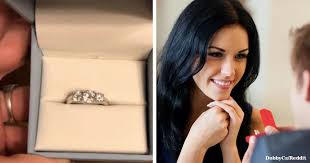 Picking out an engagement ring is a tricky business. But you’d hope that if the relationship is right, even a less-than-glorious ring will be celebrated. It’s about love not...
by Joy Smith November 8, 2018 471 Views

Picking out an engagement ring is a tricky business. But you’d hope that if the relationship is right, even a less-than-glorious ring will be celebrated. It’s about love not diamonds, right? That was not the case for one couple. There’s uproar on Reddit in response to a woman who decided to ‘roast’ her engagement ring online, posting a photo in a Facebook group with the caption ‘Ewwwww’.

‘Self shame Friday here I come,’ wrote the mystery woman, along with a photo of a sparkly ring. ‘Found this in the BF’s nightstand. Not a fan. ‘Please roast and then tell me how to tactfully say no you need to go get something different.’ (Picture: EvilCowEater/Reddit) At least she wanted to be tactful. That Facebook post was shared on Reddit, where it quickly racked up criticism. ‘This is the saddest thing I’ve seen on this sub,’ wrote one Redditor. ‘It’s one thing when it’s a total stranger, but when someone that’s supposed to love you unconditionally acts like a grifter it’s just plain sad.’

‘I hope he sees this, and then RUNS,’ wrote another. The Facebook group the woman posted a picture of her ring in (Picture: Facebook) One wise commenter wrote: ‘If the ring is the problem, the ring isn’t the problem. If she really loves him, she’ll be over the moon with a ring made of tin foil. The fact that she’s upset about the ring and not excited that her partner is about to propose is a massive red flag.’ True.

It’s worth noting that according to the woman’s post, she hasn’t actually been proposed to yet and instead found the ring in her boyfriend’s drawer, so it’s possible that this all might be a huge mixup and there’s not really a plan to pop the question with that ring. We do hope that the couple have a chat before any engagement happens, mind you. It sounds like they might have different priorities if the woman’s first reaction to finding an engagement ring is to jump into a Facebook group specifically created to criticise rings.

Tammy Rivera reveals she has cheated on Waka Flocka before!