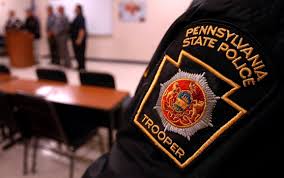 Wife turns in her state trooper husband for having sex with prostitutes!

The wife of a Pennsylvania state trooper accused of paying prostitutes for sex and creating fake profiles on social media tipped off police to the sordid allegations, court documents...
by Joy Smith June 11, 2019 277 Views

The wife of a Pennsylvania state trooper accused of paying prostitutes for sex and creating fake profiles on social media tipped off police to the sordid allegations, court documents show.

The wife of Trooper Benjamin Toth, 32, of Kunkletown, first notified the Pocono Mountain Regional Police Department in September 2016 that her husband had been soliciting women for sex on Facebook and Craigslist, WOLF reports.

Adrienne Toth, 48, provided investigators with several explicit posts from the websites suggesting the “performance of sexual acts in exchange for money,” according to a Monroe County criminal complaint obtained by the station.

An iPhone 4 was among several devices allegedly used by Toth that was handed over by his wife to investigators, the station reports.

A misdemeanor charge of patronizing prostitutes was later filed against Toth in May. The investigation was delayed because the case was reassigned, WBRE reports.

Court documents obtained by the station show that authorities believe Toth used aliases of “George” and “Gary” to connect with women for sex on Facebook and Craigslist, where detectives claim his phone number and email address were linked to more than 20 inappropriate postings.

A judge ruled Thursday that the case can proceed against Toth, who pleaded not guilty during the court appearance, WBRE reports.

A prosecutor said Toth used a law enforcement database to reach out to a woman he met who was found unconscious after using heroin, but the woman claims they never met in person despite multiple offers to pay her for sex.

“My client will never plead guilty to this matter because he didn’t do anything to be guilty of,” Toth’s attorney, Joseph Nahas, told WBRE. “You have an ex-wife who’s upset she’s an ex-wife. And now what’s she trying to do? Destroy her husband.”

Toth, a six-year department veteran, remains on restricted duty with limited interaction with the public in Monroe County, a Pennsylvania State Police spokesman confirmed to The Post.

A message seeking comment from Nahas was not immediately returned.

New York may be the first state to decriminalize prostitution!