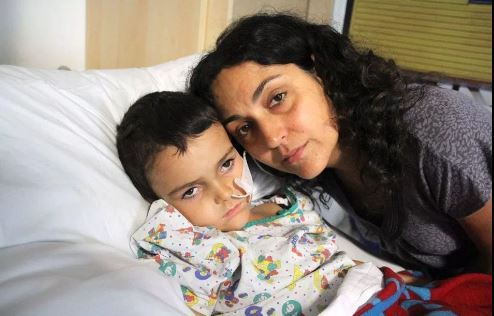 THE mom of brain cancer survivor Ashya King is stuck in locked-down Spain after splitting from her Jehovah’s Witness husband. Naghmeh and Brett King sparked a 2014 manhunt after...
by Zach Freeman May 25, 2020 205 Views

THE mom of brain cancer survivor Ashya King is stuck in locked-down Spain after splitting from her Jehovah’s Witness husband.

Naghmeh and Brett King sparked a 2014 manhunt after taking their son, then five, out of a UK hospital against doctors’ advice.

They could not get proton therapy on the NHS and were arrested after fleeing to Malaga.

The couple, both practising Jehovahs at the time, were briefly jailed.

Ashya, ten, has now made an “amazing” recovery.

But Naghmeh, 50, has revealed she left Brett, 56, and their seven kids in Milton Keynes, Bucks, and headed to their holiday home days before the travel ban was enforced last month.

And she said that Jehovahs were branding coronavirus an “Armageddon”.

She explained: ‘“My kids are at home and terrified this is Armageddon while I am stuck here in Spain.

BRITAIN’s four million NHS staff are on the frontline in the battle against coronavirus.

But while they are helping save lives, who is there to help them?

The Sun has launched an appeal to raise £1MILLION for NHS workers. The Who Cares Wins Appeal aims to get vital support to staff in their hour of need.

We have teamed up with NHS Charities Together in their urgent Covid-19 Appeal to ensure the money gets to exactly who needs it.

The Sun is donating £50,000 and we would like YOU to help us raise a million pounds, to help THEM. No matter how little you can spare, please donate today here: www.thesun.co.uk/whocareswinsappeal.

“The Jehovah’s Witnesses say coronavirus is the great plague prophesied by God and they will only be saved if their belief in Jehovah is strong enough.”

Admitting her marriage is on the rocks, Naghmeh added: “I couldn’t deal with it and came out at the beginning of March.

“I told them I would self-isolate here where I will be safe. Brett said he didn’t want me to leave the house but I couldn’t take it anymore.”

“I feel free and have got more time to think and study.

“Now I just want my children back. I want them to come over and live with me here in Spain and I have been looking at bigger homes to rent.”

Ashya had been diagnosed with a medulloblastoma which was successfully removed by surgeons in Southampton in July 2014.

He had a further operation on his brain soon after.

But to help prevent a return of the tumour, his parents wanted him to be given proton therapy — which the NHS did not provide at the time.

The Kings took him to Spain but were arrested at the request of the British authorities and held in Madrid’s Soto Del Real prison.

The couple were kept in the jail for more than 24 hours before being released when efforts to extradite them to the UK were abandoned.

In 2016, two years after the start of Ashya’s treatment, the NHS decided it would pay for children with brain cancer to travel abroad for proton beam therapy.

Are The Airlines And Airports Causing COVID19 Outbreaks?