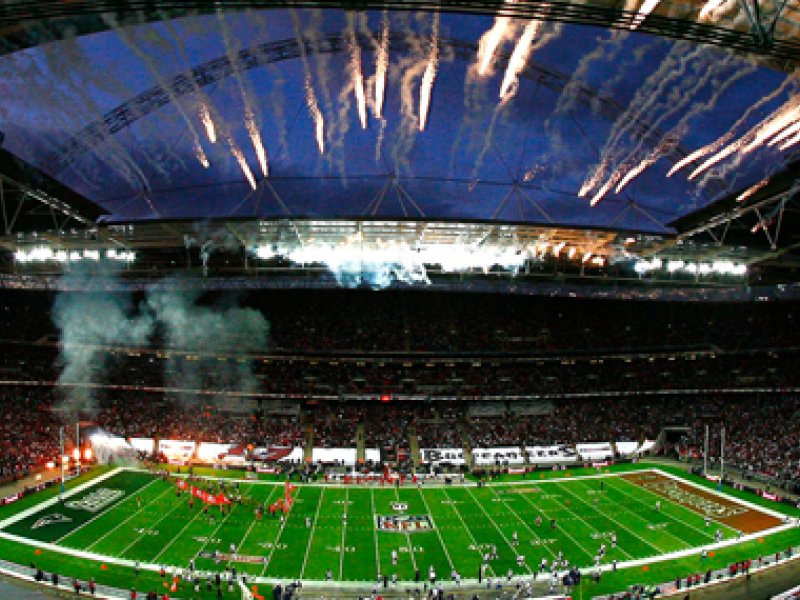 LONDON – There were no NFL jerseys to be seen on Regent Street as the clock ticked toward kickoff this past Sunday. Why should there be, as the shutters...
by Zach Freeman October 21, 2017 564 Views 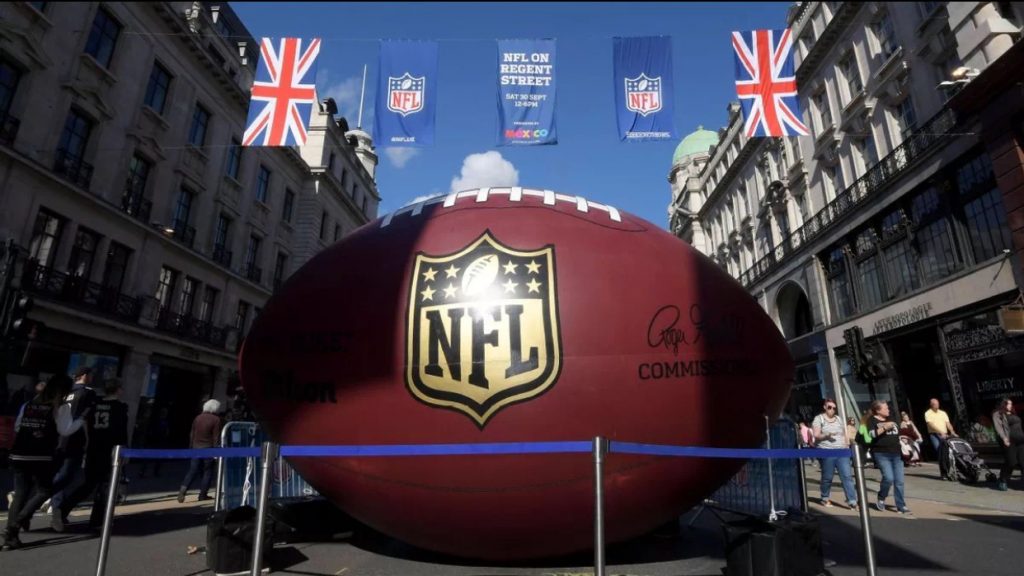 LONDON – There were no NFL jerseys to be seen on Regent Street as the clock ticked toward kickoff this past Sunday. Why should there be, as the shutters came down on another busy weekend in one of London’s busiest tourist shopping districts? This is where people come to buy an iPhone or a Karl Lagerfeld handbag, not to catch up on sports from across the pond.

A little more than a fortnight earlier, however, this same street was drowning in NFL paraphernalia. There were cheerleaders, marching bands and sponsored entertainments galore. You could see the jerseys of all 32 teams among the crowds lining up to bounce through gridiron-themed obstacle courses and watch former players being interviewed on a temporary stage.

The NFL on Regent Street has become an annual event, a day-long festival of football to accompany the ever-expanding slate of International Series games. Although the attendance figure claimed by the league – some 600,000 people – is inflated by the inclusion of regular weekend shoppers, the occasion is undeniably well received.
Its success is often cited as evidence of how London has embraced a league that sells out games at Wembley Stadium and Twickenham, where the Los Angeles Rams face the Arizona Cardinals this week, with ease. But has this city – and this country – truly fallen for American football, or does it simply enjoy a traveling circus? How many people keep paying attention after the NFL’s entertainers pack up and leave?

A browse of the Sunday newspapers might lead you to believe that the sport has no footprint at all in the UK during weeks without a London game. Most do not carry a single NFL story, with the sports pages dominated by soccer and supplemented by rugby, cricket and horse racing.

And yet, just a few minutes’ stroll from Regent Street you can find thousands of fans packing in for an NFL watch party. The Hippodrome Casino by Leicester Square has been screening games every Sunday since 2013, and the crowds only seem to grow. What began in a modest lounge has now expanded across two floors, with dedicated bars and a theater with a cinema screen.

“I think we can fit just around 2,500 people with this setup,” says Wade McElwain, the event’s promoter. “But we’ve topped 4,000 before – taking extra space downstairs and upstairs as well.”

McElwain is a Canadian who moved to London a decade ago and grew frustrated at not being able to find a spot to watch games with his friends. The overwhelming response to a Super Bowl party he arranged at his local pub in 2008 persuaded him that he was not alone. He started to host regular NFL nights at a bar in Marylebone before switching to the Hippodrome.

Every game is screened here and every game has an audience. A dozen Browns fans groan in unison as Kevin Hogan lobs a pass way over the head of running back Duke Johnson and watches Houston’s Johnathan Joseph take it back 82 yards for a score.

Dan Adshead discovered the sport through relatives in Cleveland. At first, he says, he could not find anyone back home to watch with him. “I was 18 in 2004, and none of my friends were into American football,” he says, adding that the naysayers would call the game a wimpy version of rugby, “because you’re wearing pads.”

That notion will be familiar to most who have followed the sport in the UK. Perhaps, though, the mindset is shifting. Adshead is not here on his own, after all.

THIS IS NOT the first time that the NFL has sought to crack the British market. Domestic audiences were first wooed in 1982, when the newly launched, free-to-air TV station Channel 4 began to screen a weekly highlights show.

It was presented by Nicky Horne, a music DJ selected – by his own testimony – because he knew little about the sport. His producer wanted the audience to learn along with him – and they did, as the show quickly became cult viewing.

“By the end of that first season, we were getting 4 million viewers. … For a brand new national station, it was astonishing,” Horne says.

The NFL sought to capitalize with a series of American Bowl exhibition games in London. They were well attended at first, but interest waned as British audiences cottoned onto the tepid reality of preseason football. As the novelty wore off, fans drifted away.

To Horne, things feel different this time. “I think the best way to describe it, is to use a music analogy,” he explains. “Back in the days when Led Zeppelin were hardly known, people would walk around with a ‘Led Zeppelin I’ album under their arm and consider themselves part of a very exclusive club. And that, I think, is what American football was like in the very early days.

“But Led Zeppelin went from a cult group to a super group, and I think that to a degree that’s what’s happening now. I think there’s a much wider audience for American football. … It’s much more mainstream now.”

There is good evidence to support that suggestion. The NFL reports that 24 million unique viewers saw its games on TV in the UK last season. We should be mindful here of the phrasing; seeing is not the same as watching, and with the London games and a weekly highlights package shown on the BBC, that figure will include plenty of accidental viewers.

Even those, though, can be significant. Baltimore Ravens rookie offensive tackle Jermaine Eluemunor, a UK native, discovered the sport while channel hopping in 2007 and stumbling across London’s first International Series game.

Gerry Anderson, a tight end for the London Monarchs in the World League of American Football in the 1990s, had a similar introduction to the NFL, although he’d required some lucky timing to catch Super Bowl highlights on a general sports show in the late 1970s and didn’t get a chance to actually play for several more years.

The initial popularity of Channel 4’s coverage brought a surge of sponsors eager to invest in the sport at a grassroots level in the UK, but Anderson now sees it as a missed opportunity. Britain’s amateur leagues grew rapidly, with some teams even paying to bring American coaches and players across to raise the level of play. Long-term development, however, was ignored.

“I played against Sean Payton in [1988] when he was with the Leicester Panthers,” Anderson says. “Now he’s the head coach of the Saints. But in terms of developing the sport, those guys rocked up and played; they didn’t really develop the sport. There was nothing done to get kids involved and support the youth game.”

Or maybe a more significant factor is simply that those fans who jumped aboard in the 1980s now have kids of their own. “When I do fan events now, you see a much broader range of people,” Horne says. “You see a lot of very young kids who have been handed the game from father to son.”

THE FACT THAT Eluemunor was able to watch American football on the BBC at all in 2007 is indicative of how the sport’s presence has grown. From the mid-1990s through to the start of the International Series, free-to-air channels in Britain had shown only intermittent interest.

Sunday Night Football is now also broadcast weekly on Talksport, a national radio station, while the Jacksonville Jaguars agreed to a deal this season to have all their games aired on sister channel Talksport 2. The latter also provides live updates on all NFL action throughout Sunday evening as well as a weekly magazine show.

“The fact Talksport does do a weekly show, independent of its live coverage, that never would have happened a few years ago,” presenter Nat Coombs says. “I know that for a fact, because I tried to get the show off the ground for a few years. Now it’s, ‘Yeah, of course we’d do an NFL show, like we’d do an F1 show or a racing show or a boxing show.’ It’s on that level.”

It’s still nowhere close to what might be achieved for Premier League soccer throughout the British media. Soccer’s popularity outstrips that of any other sport in this country – rugby and cricket included – by a very, very long way.

The NFL will never threaten that reality. Yet there is room for it to carve out its own niche. Just because there were no NFL jerseys on Regent Street on Sunday does not mean that plenty of people were not wearing them somewhere in a city of almost 9 million people.

Back at the Hippodrome, Patriots fan Rachel Joseph claims that she’s always running into strangers wearing team merchandise, although she has learned not to assume they follow the NFL. “I’ve been in two different sports shops and I’ve said to guys, ‘Oh, you support the Bengals,’ or, ‘Oh, you support the Panthers,'” she says. “They both looked at me like, ‘What are you talking about?’ So I’m saying, ‘You do know your hat is for the Bengals?’ And they said, ‘Oh, I just bought it because I like the colors.'”

There is a hint of indignation in her voice, an exasperation at these fools who do not recognize the meaning of their own clothes. That’s the way it goes, though, when your favorite band tips over into the mainstream.