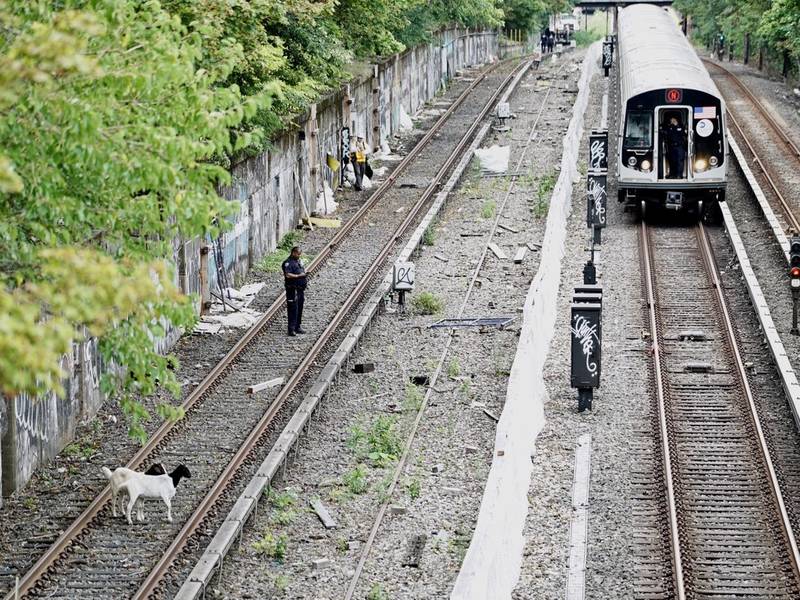 Two goats were found grazing on grass Monday morning as they roamed down the sea beach line of the N train in Borough Park, Brooklyn. The MTA first became...
by Joy Smith August 20, 2018 313 Views

Two goats were found grazing on grass Monday morning as they roamed down the sea beach line of the N train in Borough Park, Brooklyn.

The MTA first became aware of the goats at the Eighth Avenue stop in Sunset Park, when a train operator alerted the authority’s Rail Control Center at about 10:30 a.m. After heading south, MTA and NYPD personnel corralled the goats between the Fort Hamilton Parkway and New Utrecht Avenue stops.

“Two very baaaaad boys,” tweeted the MTA’s subway account, with a picture of the two black and white farm animals.

A new one for us (we think): Two goats are roaming along the N line tracks in Brooklyn. They’re safe and not currently affecting service, but they are on the run. We’ll keep you posted.

“A new one for us (we think): Two goats are roaming along the N line tracks in Brooklyn,” the MTA said in another tweet. “They’re safe and not currently affecting service, but they are on the run.”

The subway goats were out on the tracks for at least two and a half hours before they were eventually captured by police at about 1 p.m. The pair of animals were “tranquilized and still snoozing when our officers handed them over to specialists” at the Animal Care Centers of NYC, according to NYPD Transit Chief Edward Delatorre’s Twitter account.

For about 30 minutes, as responders attempted to capture the goats, southbound N trains were rerouted to run on the D line from 36th Street to Coney Island-Stillwell Avenue stations.

It was not immediately clear who owns the very bad boys or at what point they entered the tracks. But the goats appear to be off to greener pastures than those afforded by the concrete jungle.

A recent history of animals in the city subway:

January 2012: A late-night, Manhattan-bound D train is evacuated after riders find an opossum nestled up against a radiator under a subway seat.

August 2013: Two kittens, August and Arthur, rescued from B and Q lines near Church Avenue station in Brooklyn caused hours of delays.

August 2016: As a prank, a woman let loose hundreds of crickets onto a D train, causing a panic. One rider pulled the train’s emergency brake, leaving the train stuck on the Manhattan Bridge for 30 minutes.

August 2017: A straphanger took a duck on a leash onto a G train in Brooklyn.

June 2017: Riders freak out as they watch a woman feed a pet raccoon on an uptown 6 train.

January 2018: A restless pigeon boards a C train in Brooklyn, panicking riders as it flies back and forth from one end of the car to the other.

A representative from Animal Care Centers told amNewYork that the goats would be transferred to Farm Sanctuary, a nonprofit shelter for farm animals located in Watkins Glen, New York.

“That’s Mondays in NYC for ya…” Delatorre tweeted.

While it’s certainly unusual for farm animals to make their way into the city’s subway system, the MTA deals with its fair share of fuzzy farebeaters. A report from amNewYork in 2015 found that animals delayed nearly 700 trains in a two-and-a-half-year period.

MTA chairman Joseph Lhota made headlines in 2013 over his animal-on-the-track policy while a mayoral hopeful. After Brooklyn subway service was halted so crews could save two kittens, August and Arthur, from the B and Q lines near the Church Avenue station, Lhota stated that he wouldn’t have stopped service for such a rescue.

A spokesman for the MTA said the chairman was not involved in Monday’s decision-making process.

88-Year-Old Man Burns Raccoon Alive Because It Ate His Mangoes!