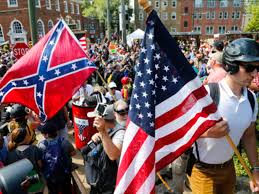 One of the white supremacists who viciously beat a black man inside a parking garage during last year’s “Unite the Right” rally here was found guilty Tuesday night of...
by Zach Freeman May 2, 2018 452 Views

One of the white supremacists who viciously beat a black man inside a parking garage during last year’s “Unite the Right” rally here was found guilty Tuesday night of malicious wounding.

Jacob Scott Goodwin, 23, who wore a military tactical helmet and brandished a large shield during the Aug. 12 attack against DeAndre Harris, was convicted by a jury of nine women and three men.

The assault on Harris, 20, a former special education instructional assistant, was so ferocious that he suffered a spinal injury, a broken arm and head lacerations that required eight staples.

Online footage of the beating has been viewed online tens of thousands of times and attracted a group of online sleuths, led by Black Lives Matter activist Shaun King. They tracked down the alleged perpetrators’ identities, including that of Goodwin, who lives in Ward, Ark. Goodwin was arrested about two months after the rally.

Goodwin’s attorney, Elmer Woodard, argued Harris, then working as a YMCA camp counselor, came to pick a fight and that his client was just trying to defend himself.

He said it was Harris who went after Goodwin. Goodwin kicked Harris on the ground to defend himself and the other white supremacists in the garage. “He gets up, with evil in his eye, and charges Mr. Goodwin,” Woodard said.

But Nina-Alice Antony, an assistant commonwealth’s attorney, said it was Goodwin who wanted to square off.

“He was outfitted for battle,” she told the jury in opening statements. “He’s got large goggles, boots. He’s got a full body shield.”

Goodwin also wore two pins, one bearing the number 88, a code for “Heil Hitler,” and a second with the logo for the Traditionalist Worker Party, a white-nationalist group.

The attack inside the Market Street parking garage, next to the Charlottesville Police Department, was one of several disturbing acts of violence during the rally, which was held to protest the removal of a statue of Confederate Gen. Robert E Lee from a city park. A self-professed neo-Nazi rammed his Dodge Charger into a crowd of people that day, killing 32-year-old counterprotester Heather D. Heyer, a paralegal.

Videos of the parking garage attack on Harris — and of its preceding moments — have been scrutinized frame by frame by Harris’ defenders and white nationalists, each side arguing over one sticking point: Was Harris a victim or an instigator?

Harris was acquitted in March of misdemeanor assault and battery against one of the white supremacists involved in the confrontation.

Nevertheless, much of Goodwin’s trial centered on whether Harris sparked the fight himself by striking a prominent white nationalist in the head with a flashlight. Seconds before Harris ran into the garage shortly after 11 a.m. that day, he was standing at its entrance. He saw a fellow counterprotester being speared in the abdomen with a flagpole by Harold Crews, the North Carolina state chairman of the white-nationalist group League of the South. To protect his friend, Harris swung a flashlight at the flagpole, trying to knock it away.

Seconds after the fight with Crews, Harris rushed inside the parking garage, where he was pummeled.

When Goodwin took the stand, he told the jury he’d seen Harris assault Crews and then saw Harris charging toward him. He testified that he was scared.

“I thought he was a hostile … to be honest, I was terrified,” said Goodwin, who added that he thought he could have died and that “I’d probably perish or be sent to the hospital and be terribly hurt.”

He said he engaged in self-defense and felt he had only one choice, which was to kick Harris four times while Harris was falling down on the garage floor and scrambling to get back up multiple times.

“I was trying to neutralize a threat,” Goodwin said.

For the entire trial, neither the prosecutors nor the defense attorney questioned Goodwin about his possible affiliation with any white-supremacist groups. But during his closing arguments, Woodard suddenly raised the issue and said, referring to his client, “They want you to convict this man because he’s white, and DeAndre is a black man.”

The comment drew an objection from Antony, who told the judge she had deliberately avoided making the case about race.

In her closing arguments, Antony showed the jury a photo of Goodwin dressed in a helmet and goggles and reminded them he was clasping a large plastic shield.

She told jurors that they had to ask whether themselves if it was “reasonable” for Goodwin, dressed as he was, to be scared.

“Does Jacob Goodwin see someone over there and go help? Or does he outfit himself for battle and run in to do battle?” she asked jurors. “At no point does Mr. Goodwin break away.”

Antony argued that Goodwin’s kicks to Harris’ backside, ribcage and stomach could have killed, maimed or disabled Harris, elements necessary for the malicious-wounding charge.

But Woodard said Harris’ major injuries involved his head and that the kicks didn’t amount to malicious wounding or even assault and battery. Goodwin, he said repeatedly, feared for his life and was defending himself.

Harris, who was sitting in the courtroom pews listening to the arguments, looked distraught for much of the trial and at one point asked the prosecutor for a tissue while in the witness seat.

In court this week, the jury watched multiple videos of the attack from different vantage points showing Goodwin hitting Harris with a shield and kicking him while he was on the ground. Other men join in, hitting Harris with a board and a large pole. When Harris manages to get up, they yell obscenities at him, telling him, “Get out!”

Three other men have been also been arrested in connection to the attack on charges ranging from felonious assault to malicious wounding: Alex Michael Ramos of Georgia, whose trial is scheduled to begin Wednesday; and Daniel Borden of Ohio and Tyler Watkins Davis of Florida, who face trials this summer.