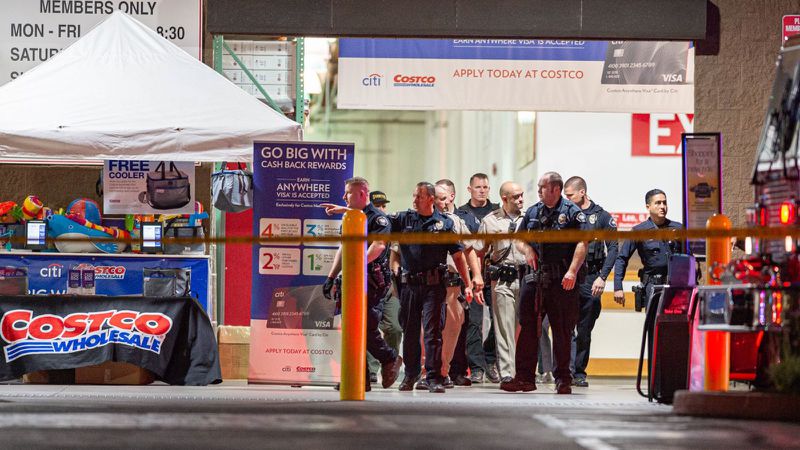 An off-duty police officer opened fire inside a Costco Wholesale warehouse store, killing a man who had attacked him and wounding two others, the Corona Police Department said. Kenneth...
by Raquel Jayson June 16, 2019 361 Views

An off-duty police officer opened fire inside a Costco Wholesale warehouse store, killing a man who had attacked him and wounding two others, the Corona Police Department said.

Kenneth French, 32, of Riverside assaulted the Los Angeles Police Department officer Friday night while he was holding his young child, the department said in a statement Saturday. The officer fired his gun, hitting French and two of French’s relatives, the department said.

French was killed, the department said. The relatives are in critical conditions at hospitals.

The officer, whose identity is being withheld, was treated and released at a nearby hospital, and the officer’s child was not injured, the department said.

The officer was the only person who fired shots in the store, the department said.

The shooting prompted a stampede of frightened shoppers to flee the store east of Los Angeles and seek cover inside.

Witnesses said they saw a man with a Mohawk haircut arguing with someone near a freezer section when shots rang out at least six times. The man involved in the argument was killed, Corona police Lt. Jeff Edwards said.

Witnesses said there was an altercation. Shoppers and employees described terror and chaos when shots rang out shortly before 8 p.m. Friday and police swarmed the store.

Shrieks from inside the store were heard on video recorded by shopper Nikki Tate, who had stopped by with her daughter to pick up steaks and lobsters for Father’s Day.

Tate said Saturday she was by the meat section when she heard “about six or seven shots.” She dropped to the ground and crawled toward her daughter who was at the other end. They huddled until they were able to escape through a side door.

“I saw people and heard shots and my first thought was ‘Jesus, is this another mass shooting?'” she said. “I didn’t know if this was a random thing or a domestic thing or if this was a mass shooting. Everything was happening so fast, I just wanted to get me and my kid to safety.”

In the video, her daughter says, “Mommy, we need to go.”

The Los Angeles Police Department said in a statement Saturday afternoon that it has launched its own investigation of the incident.

Christina Colis told the Riverside Press-Enterprise that she was in the produce area when she heard six to seven shots and hid with other shoppers in a refrigerated produce room. She said her mother saw people injured on the floor.

“I thought maybe someone dropped a bottle of wine, but then I kept hearing shots,” shopper Will Lungo told the Press-Enterprise newspaper. “An employee came in and helped us out through the emergency exit.”

An off-duty Los Angeles Police Department Officer fatally shot one man and wounded two others Friday after he was “assaulted” while shopping with his family at a Corona Costco store, officials said Saturday.

Initial reports that the incident was due to an active shooter and that there may have been more than one gun involved in the shooting proved unfounded, the Corona Police Department said in a written statement issued Saturday evening.

Authorities investigate the scene of a shooting that left one man dead and two people wounded at a Costco store in Corona on June 14, 2019. (Credit: KTLA)

Kenneth French, 32, of Riverside died at the scene of the shooting, Corona police said. Two of French’s family members were critically wounded. Their ages, genders and relationships to the dead man were not released Saturday.

The incident unfolded about 7:45 p.m. at the Costco, 480 N. McKinely Street as the off-duty officer, described as a patrol officer assigned to the LAPD’s Southwest Division, was shopping with his family, officials said.

“Without provocation, a male unknown to the officer’s family assaulted the officer while the officer was holding his young child,” according to the Corona police statement. “This attack resulted in the officer firing his weapon, striking the male and two of the male’s family members. ”

The involved officer, whose name was withheld, was treated for minor injuries at a hospital and released a short time later. It was unclear what type of injuries he suffered or how he was assaulted. Police made no mention of any weapons used by the alleged attacker.

The statement released by Corona police did not accuse the two wounded family members who accompanied the suspect of any wrongdoing.

Officials said the officer’s child was not hurt.

“The officer’s gun was the only weapon involved in the incident, contrary to earlier reports,” the Corona police statement said. “As is standard procedure in such investigations, the Corona Police Department is working closely with the Riverside County District Attorney’s Office who will be evaluating the facts and circumstances of this incident.”

Everyone involved in the shooting was believed to have been accounted for, police said. No arrests had been made Saturday, though the officer was initially detained as a possible suspect early in the investigation.

“The Department has initiated an Administrative Investigation and is working with the Corona Police Department to learn more about the incident,” the LAPD said in written statement.

The agency provided no further details about the officer’s role in the shooting, deferring comment to Corona police.

Corona police arrived at the scene just over a minute after receiving reports of gunfire, the department said.

Officers found four people injured on the floor, the Corona Police Department said. French died at the scene, while the remaining three — including the off-duty officer — were taken to hospitals, the agency said.

In a 9:09 p.m. tweet on Friday, the agency announced that the incident had been stabilized and that there was “no apparent threat to our community from any outstanding persons.”

The shots triggered panic in the wholesale retail store, with some shoppers trying to escape through emergency doors that wouldn’t open, according to witnesses.

“It’s not very fun when you’re scared and you’re running for your life, and you’re trying to open a door that says ’emergency’ and they don’t open,” Rochelle Flores said. “Everybody was freaking out. People were falling over each other.”

Cellphone footage from inside the store captured frightened customers, with audible screaming and alarms. Nikki Tate, the shopper who recorded the video, said she heard six or seven shots.

Another video from the scene showed paramedics wheeling one person on a gurney into an ambulance.

Officials collected cell phones, backpacks and other personal items left behind by shoppers who fled the store amid the gunfire, Corona police said. Those items were stored for safekeeping and are available for pickup by contacting the department.

Anyone with information about the incident can contact Lt. Robert Newman by calling him at 951-817-5788 or sending him an email at Robert.Newman@CoronaCA.gov.

WENDY WILLIAMS’ NEW GUY I’M NO GOLD DIGGER … I Take Care of Myself!!!