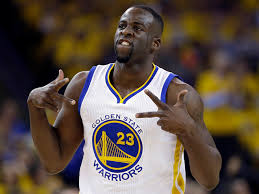 Well @warriors….do ya’ll think its going to be easy!

Both of the teams have a serious chance of winning the next championship. It all comes down to the team that wants it the most and who is ready to fight for each possession. I feel like talent wise it can go either , because they are both super talented teams. Its really hard to tell who will win because there literally taking over the NBA.

The 2015-16 Golden State Warriors — last year’s record-breaking, 3-1-Finals-lead-blowing squad — were among the very best teams in NBA history, as evidenced by their 73-9 record.

All that talent wasn’t enough, though, as a Draymond Green suspension and a Stephen Curry injury joined forces with the greatest performance in Finals history from LeBron James to cost the Warriors a championship to cap their record-setting season.

When those Warriors watched that lead over LeBron’s Cleveland Cavaliers evaporate last year, they did what any reasonable team would do — went out and signed the second-best player in the NBA to add to an already stacked squad.

They’re already an all-time great squad heading into the Finals once again, right up there with the 1995-96 Chicago Bulls and the best Lakers and Celtics teams of the ’80s.

Those teams boasted some of the most legendary players in NBA history — names such as Jordan, Magic, Bird, Kareem, Worthy and McHale, but none had four bonafide stars in their prime like these Warriors. None embraced the power of the 3-point shot the way Golden State has. And none had quite this much firepower on both ends of the court, fantastic as those historic teams were.

However, we learned our lesson last season when it comes to a premature proclamation that a Warriors team is the greatest of all time.

This Dubs team does have a golden opportunity to go down in NBA history, but it won’t be easy.

If Golden State wants to elevate this year’s team above all of the other great seasons in NBA history, the Warriors need to crush LeBron James.

The King is playing the game at the highest level we’ve ever seen — making “LeBron or Jordan?” a valid conversation despite his own spotty Finals history — but Cleveland remains vulnerable against Golden State’s high-powered offense. Las Vegas thinks “Warriors in 5” is the most likely outcome of this series (+260 odds), with “Cavaliers in 7” (+600) and “Warriors in 4” (+650) more or less equally probable.

A Golden State sweep would make the Warriors the only team in NBA history to go undefeated through the postseason, while a five-game series win would still give this superteam the mark for best win percentage in a single NBA playoffs.

And if you take the greatest regular-season team in NBA history from 2015-16, add the second-best player on the planet and watch that team dominate everyone in its path through the postseason, how can you call that entire season anything short of the best performance by any team ever?

Those Celtics and Lakers teams, great as they were, would struggle to stay on the court against the 3-point barrage of this Warriors team. That’s just the nature of this world; we evolve and grow over time, leaving the past in our wake — which is why we’re not even going to consider including the pre-merger Boston squads into this discussion.

As for Jordan’s Bulls? The 1996 and 1997 Chicago rosters are the only teams with a higher net rating for a season than this year’s Warriors, but they never vanquished a team as great as LeBron’s Cavaliers in the NBA Finals, and that 72-10 season was inflated by the addition of two expansion franchises that year.

Should the Warriors steamroll the Cavs in four or five games, history will forget that Golden State’s opponents battled injury, because the Finals will have been between two healthy juggernauts at the height of their powers. These Warriors can get revenge for last year and go down as the best team in NBA history.

All they have to do is slay the King. Four quick, decisive blows, and the crown is theirs.

What’s an NBA Finals sweep to the GOAT?