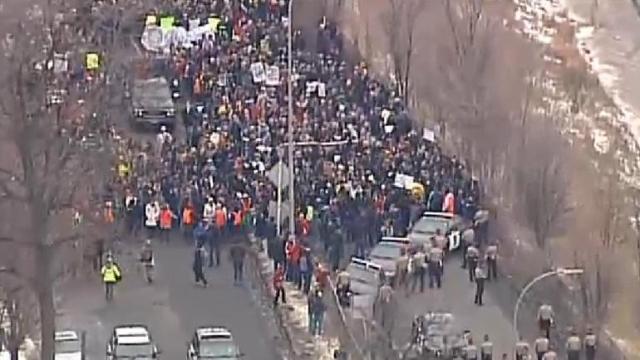 “We Riot Because You Don’t Hear Us When We March” Says Some In Minneapolis!

Hundreds of protesters gathered at the intersection where George Floyd was killed after a forceful encounter with police … and things got pretty tense. The protest began Tuesday night in Minneapolis,...
by Zach Freeman May 27, 2020 144 Views

Hundreds of protesters gathered at the intersection where George Floyd was killed after a forceful encounter with police … and things got pretty tense.

Similar chants of “I can’t breathe” and “No Justice, No Peace” broke out among the demonstrators, who eventually marched more than 2 miles to a city police precinct … with some causing damage along the way.

“..we riot because you don’t hear us when we march..” I stand with the city of Minneapolis! #JusticeForFloyd #RIPGeorgeFloyd #GeorgeFloyd #BlackLivesMatter ✊🏾 pic.twitter.com/WLDRpfJE7U

Things escalated to a point where protesters were met by cops in riot gear, who fired tear gas canisters and projectiles into the crowd. Some kicked the canisters back toward police, and made a makeshift barricade of shopping carts at a Target across the street from the station.

If you’re out in the streets by chance, make sure your mask is on to protect you from covid-19 of course, no other reason! 👀😷✊🏾 #GeorgeFloyd #BlackLivesMatter #NoFaceNoCase pic.twitter.com/pnNOUk6Wyh

Though steady rain lessened the crowd, skirmishes lasted late into the night.

As we reported … Floyd died shortly after officers arrested him for an alleged forgery in progress. Footage of the incident shows one cop pressing his knee down on George’s neck for several minutes — ignoring his pleas that he couldn’t breathe — while witnesses shouted that he was being killed.