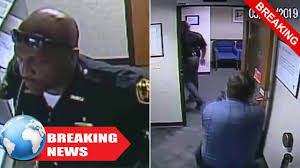 Watch: White Security Guard Pulls Gun on Black Uniformed Deputy and holds him a gunpoint until!

A uniformed sheriff’s deputy says he thought he was going to be shot when a trip to an Ohio IRS office ended with a security guard pulling a gun...
by Joy Smith July 16, 2019 519 Views

A uniformed sheriff’s deputy says he thought he was going to be shot when a trip to an Ohio IRS office ended with a security guard pulling a gun on him.

Lucas County Sheriff’s deputy Alan Gaston told ABC affiliate WTVG he stopped by an IRS office in Toledo on May 31 to ask questions about a letter he had received.

He was on duty at the time so he had his gun and pulled up to the building in a marked cruiser, he told the news station.

When he entered the facility, a guard later identified as Seth Eckland informed Gaston he could not be armed in the building and asked Gaston to put his gun in the car, according to an incident report from Toledo police.

Eckland called Toledo police, and officers arrived on the scene at about 11:15 a.m.

Eckland said in the incident report obtained by Atlanta Black Star that he told Gaston:

“It was a federal building and he wasn’t allowed to have his weapon on him regardless of his status or position if he was there on personal business.”

Gaston replied by asking if there was a lock box or secured area where he could store his weapon, and Eckland said there was no such location, according to the incident report.

At that point, Gaston said he complied with the security guard and tried to leave the area. Gaston said in the incident report that he took a relaxed posture with his forearms resting against his duty belt and again tried to talk to Eckland.

That’s when the guard drew his weapon and told Gaston he couldn’t leave until authorities arrived on the scene, according to the incident report.

Gaston said he thought the guard was going to shoot him and he was “bracing for a shot in my back.”

The security footage shows the guard pointing his gun and following Gaston to an elevator as the deputy was leaving.

Gaston, who works as a defensive tactics instructor, told the news station he felt the best way to de-escalate the situation was to walk away.

Gaston, who is on medical leave from work, filed a civil lawsuit against Eckland and the security company, Law Enforcement Online reported. He is seeking compensation for lost wages and emotional and psychological distress he says he suffered as a result of the incident.

He told WTVG that he had these words for Eckland:

“I would say: ‘Clearly, your training is lacking, and the fact that you went 0 to 100. Lethal force is unacceptable.’”

2019 Emmy Award Nominations Revealed: See Who Made the Cut

Phaedra breaks her silence about Kandi and is very unapologetic!