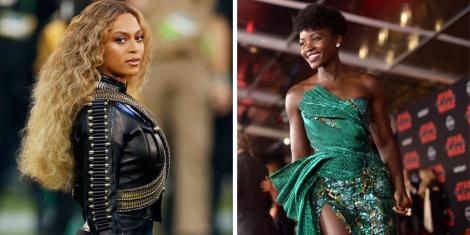 On Monday night, Lupita Nyong’o stopped by The Tonight Show Starring Jimmy Fallon. And host Jimmy Fallon seemed happy to see her. “Let me just run down everything that’s happened since the...
by Raquel Jayson October 8, 2019 254 Views

On Monday night, Lupita Nyong’o stopped by The Tonight Show Starring Jimmy Fallon. And host Jimmy Fallon seemed happy to see her. “Let me just run down everything that’s happened since the last time you were on the show,” said the host. “You won an Oscar for 12 Years A Slave. You were in a couple of small films, Star Wars and Black Panther. You got a Tony nomination. And probably most important, your name is now a Beyoncé lyric.”

Fallon forgot about Us! But he was right about Beyoncé. Nyong’o was referenced on Beyoncé’s “Brown Skin Girl.” As the lyrics go, “she need an Oscar for that pretty dark skin/Pretty like Lupita when the cameras close in.”

N’yongo was thrilled when the song came out in July–she posted a video of herself dancing to the single, thanking Bey for “this gift.” And so on The Tonight Show, she busted out her own musical chops. Nyong’o rapped (very well!) as her alter-ego Troublemaker, a name bestowed upon her by Common.

“Troublemaker in the building, hey,” she began. “I feel some bars comin’, bars comin’/Much love to the Carters, Hova and Yoncé/They always big me up in a big way/I’m a brown-skin girl, so that means a lot/Hov says we made it, got an Oscar for my props.”

“Much love to Jimmy and the Roots ’cause they hot / Wrote a book about self-love / Sulwe ’bout to drop October 15th / On time to cop / Better go to commercial or these bars won’t stop,” she rapped.

Is Nyong’o (or better yet, Troublemaker) going to EGOT? Her upcoming projects include the zombie flick Little Monsters with Josh Gad and her HBO Max adaptation of Chimamanda Ngozi Adichie’s Americanah. But we hope we haven’t seen the last of Troublemaker. Watch her spit fire, below.

Man shoots himself in face after firing at ceiling trying to quiet upstairs neighbors, police say