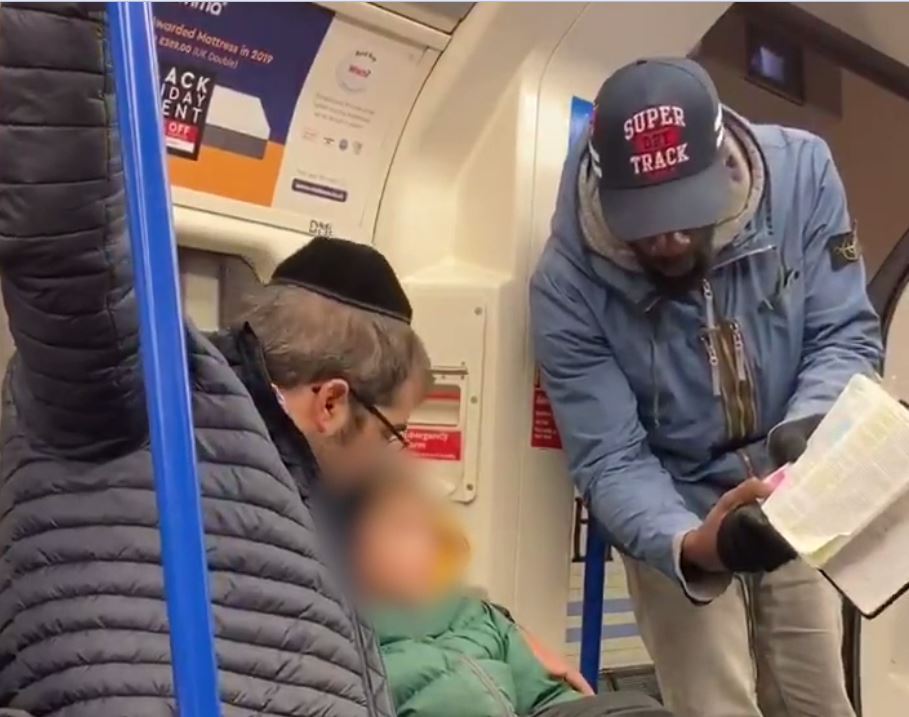 A LITTLE boy and his father were subjected to a vile anti-Semitic rant on a busy carriage by a London Tube passenger today. The shocking video was taken this...
by Raquel Jayson November 22, 2019 201 Views

A LITTLE boy and his father were subjected to a vile anti-Semitic rant on a busy carriage by a London Tube passenger today.

The shocking video was taken this afternoon on the Northern Line on the Tube between Euston and Mornington Crescent station.

A man in a blue cap is seen leaning towards a little boy wearing a kippah and reads out the Bible passage Revelation 3:9: “I will make them of the synagogue of Satan, which say they are Jewish, and are not, but do lie.

“Behold, I will make them to come and worship before your feet, and I know that I have loved thee.”

The little lad’s father has his arm around his son as he can be seen comforting him saying “just ignore him”.

A man tries to intervene before the passengers get aggressive and says “Get out of my face. I will smack you right in your nose.

As the man started to put his Bible back in the backpack a Muslim woman jumps in telling him to calm down because there are children in the carriage.

He continues his rant as he gestures towards the boy and his father: “These people are impostors, they are trying to claim my heritage and then try and tell me that it’s cool and then they start the slave trade.”

The woman puts her hands up as she tries to diffuse the situation before he takes aim at her.

He ranted at the Muslim woman: “Do you care about your people? You shouldn’t be wearing trousers then.

The video has been viewed more than 50,000 times on Twitter and many were quick to praise the woman and other passengers for stepping in.

One said: “The young Muslim woman was a star.”

Another said: “Disgraceful behaviour by that ghastly man.

“On the positive side fellow passengers stood up to him, especially a kindly Muslim lady.”

One added: “Love the Muslim sister stepping in to defend the jewish family , so much respect sis!!”

Others praised the father for not losing his temper.

One said: “Father did a great job not to lose temper.. legend.”