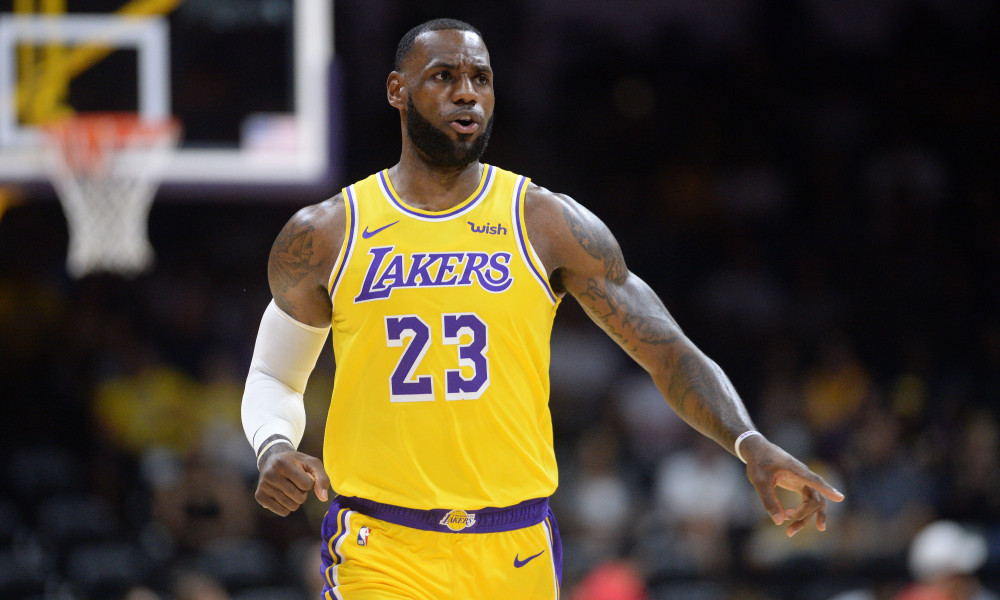 LeBron James plays 15 minutes in his preseason debut for the Los Angeles Lakers and records nine points, three assists and three rebounds in a 124-107 loss to the...
by Raquel Jayson October 1, 2018 667 Views

LeBron James plays 15 minutes in his preseason debut for the Los Angeles Lakers and records nine points, three assists and three rebounds in a 124-107 loss to the Denver Nuggets. LeBron James’ first game with his third franchise opened up with a pair of highlight-worthy plays in the Los Angeles Lakers’ preseason debut against the Denver Nuggets on Sunday.

True to form, James’ first tally in the stat book as a Laker was an assist off a no-look, wraparound bounce pass that found Brandon Ingram for a dunk.

Less than a minute later, following a Rajon Rondo offensive rebound and pitch out, James stroked a 26-foot 3-pointer with 9:12 remaining in the first quarter, securing his first bucket with his new team.

There was framed artwork stationed outside the Lakers’ locker room at the Valley View Casino Center drawn up like a concert poster commemorating “LeBron James’ Los Angeles Lakers Debut,” with James’ image front and center, flanked by an artist’s rendering of Lonzo Ball, Ingram, Kyle Kuzma and Josh Hart around him.

While James was the featured player on the poster, it was Ingram, not the four-time MVP and three-time champion, who filled up the stat sheet in the first half, as the third-year forward put up 13 points, 4 rebounds and 2 steals to James’ 9 points, 3 assists and 3 rebounds.

James played 15 first-half minutes and Kuzma started in his place in the third quarter.

play
0:21
LeBron steps back to drain 3-pointerLeBron James drives past half court and then knocks down a step-back 3-pointer.
James also made his impact felt outside of the dazzling plays that brought the sellout crowd of 13,565 to its feet.

The more things change, the more things stay the same, as the Cleveland Cavaliers struggled mightily whenever James was off the court in the past four seasons.

Yet the excitement for this Lakers group that is clearly a work in progress was palpable from the start on Sunday. Close to 300 fans attended the team’s morning shootaround in Temecula, about an hour from San Diego. And there was such a crowd of cameras in the Lakers’ locker room before the game that the Nuggets defenders weren’t the only bodies James found himself navigating.

“Excuse me, get away from my locker, please,” James said as he made his way through the crowd.

Not long after, he took the court for the first time to play a game as a Laker and had to contend with Denver, another team like L.A. hoping to make a run this season in what figures to be a crowded Western Conference playoff race.