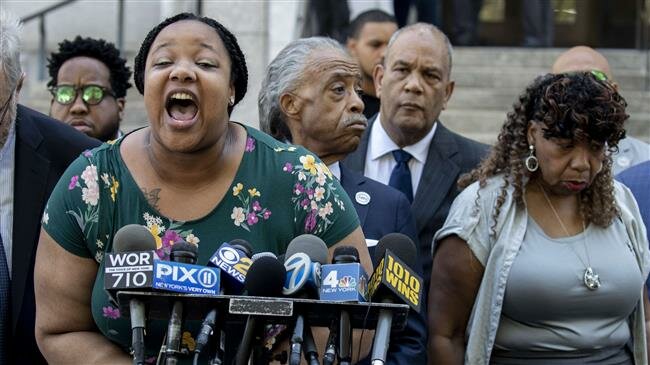 Watch: Eric Garner’s Daughter Pops Off On The Justice System!

Eric Garner’s daughter, Emerald Garner, reacts to news that the Justice Department will not bring federal charges against a New York Police Department officer accused of fatally choking her dad in.

On Tuesday, the Department of Justice announced that it will not file charges against Daniel Pantaleo, the white NYPD officer accused of using a chokehold on Eric Garner, an unarmed black man allegedly selling loose cigarettes in Staten Island in 2014. The announcement has angered activists and Garner’s family, calling new attention to a case that served as a catalyst for the Black Lives Matter movement.

The Department of Justice had been conducting a civil rights investigation into Garner’s death for the past few years, but a statute of limitations on the case meant that the agency had until Wednesday — the fifth anniversary of Garner’s death — to announce what charges Pantaleo would face.

The DOJ argued that ultimately, there was “insufficient evidence to prove beyond a reasonable doubt” that Pantaleo intentionally harmed Garner during a 2014 arrest. Pantaleo has been accused of using an NYPD-prohibited chokehold to restrain Garner, and the unarmed man’s cries of “I can’t breathe” were viewed by millions after a video of the arrest went viral in July 2014.

“When we evaluated Officer Pantaleo’s actions in light of his training and experience, Mr. Garner’s size and weight and actions to resist arrest in the duration and escalating nature of the interaction, we determined that there was insufficient evidence to prove beyond a reasonable doubt that Pantaleo acted in willful violation of federal law,” Richard Donoghue, the US attorney for the Eastern District of New York, said during a press conference Tuesday.

The DOJ’s decision, which was initially reported by the New York Times early on Tuesday, was not entirely unexpected. In recent years, several news reports on the case have noted that there was a sharp divide between the Department of Justice’s Civil Rights Division, which supported charging Pantaleo, and federal prosecutors in New York who argued that the case against the officer was too difficult to prove. The investigation lasted years, and was handled by two different presidential administrations and three attorney generals before finally being closed by current US Attorney General Bill Barr.

In the nearly five years since Garner’s pleas for air became a rallying cry for activists, no officers involved in the case have faced charges. A Staten Island grand jury declined to indict Pantaleo in 2014, and the officer has remained on paid desk duty since Garner’s death. The NYPD initially argued that it could not pursue disciplinary action against the officer until the federal investigation into Garner’s death was completed, but changed its mind in 2018. In May, the NYPD held a departmental trial that will determine if Pantaleo will lose his job.

While Garner’s family is closely watching the outcome of the department trial, it was the federal investigation that offered the last chance for Pantaleo to face criminal charges. That he will not do so has disappointed Garner’s family and supporters, who have waited years for officers to be held accountable for Eric Garner’s death.

“The DOJ has failed us,” Garner’s mother, Gwen Carr told reporters on Tuesday shortly after the DOJ informed her of its decision. “Five years ago my son said, ‘I can’t breathe’ 11 times. And today we can’t breathe because they have let us down.”

On July 17, 2014, Eric Garner, a 43-year-old father of six, was confronted by police officers on a street corner in Staten Island, New York, for allegedly selling untaxed loose cigarettes. When Garner pulled away from an officer, he was allegedly placed in a chokehold by Pantaleo. After being lowered to the ground, Garner was restrained by several officers.

In a video taken by Ramsey Orta, a friend of Garner’s and a bystander at the scene, Garner could be heard telling officers, “I can’t breathe” 11 times. NYPD officers later called an ambulance for Garner after noticing his breathing difficulty, but additional video showed that he was not given oxygen for several minutes after the paramedics arrived.

Garner was pronounced dead shortly after arriving at the hospital. An autopsy confirmed that he died of a heart attack and that while Garner had dealt with obesity and asthma, the medical examiner said that the chokehold and the pressure officers applied to his chest while pinning him to the ground also played a role.

When Pantaleo was not indicted by a grand jury in 2014, it quickly sparked protests in the city. The grand jury decision also prompted then-Attorney General Eric Holder to announce that the Department of Justice would conduct a federal civil rights investigation into Garner’s death, opening up the possibility that Pantaleo would face federal charges.

In the civil rights investigation, the DOJ’s task was to prove that Pantaleo had intentionally and willfully violated Garner’s civil rights when he restrained the man and thus deserved to face criminal charges. The last NYPD officer charged by the federal government for the use of deadly force was Francis Livoti, who was convicted in 1998 for the choking death of 29-year-old Bronx resident Anthony Baez.

Civil rights investigations are often long and involved processes, but the Garner investigation was particularly long, even by those standards. “It is taking quite a bit of time,” William Yeomans, a former acting assistant attorney general for civil rights, told the New York Times in 2016. “I’d almost say it’s been longer than expected, especially since a video exists.”

As the New York Times has reported, much of the delay was due to the aforementioned divide between the DOJ’s civil rights division and New York-based federal prosecutors (as well as the FBI). Dating back to Holder’s tenure as AG, the DOJ’s civil rights division has advocated for charges, but federal prosecutors claimed that the case, even with video, would be difficult to win in court. Holder’s replacement, Loretta Lynch, later authorized the department to move forward with the investigation, but her announcement came close to the end of the Obama presidency, effectively punting the case to the Trump administration.

The already low prospects for the case grew dimmer when the investigation moved to the new administration. The timing of Lynch’s decision meant that the investigation continued under Attorney General Jeff Sessions, who often vocally criticized police reform efforts and accountability measures. Barr, Sessions’ replacement, ultimately sided with those who said that the case wasn’t winnable and should not be prosecuted.

Garner’s family argued that they had not been kept up to date on what had been happening, and they were especially critical of how the Obama administration handled the first few years of the case. “I don’t understand how #obama and #lynch could hold my dads case for 2.5 years and not make it a priority,” Garner’s eldest daughter Erica, tweeted in June 2017 after receiving updates from the Trump DOJ. Erica, who continued to push for justice for her father after his death and demanded faster action from the DOJ, died from a heart attack in December 2017, more than a year before the official outcome of the investigation was announced.

The DOJ’s announcement has been heavily criticized

Now that the DOJ has announced its final decision, the agency has been criticized not only by Garner’s family but by civil rights groups and some New York political officials.

”The entire world saw the same devastating video five years ago, and our eyes did not lie. Today’s inaction reflects a DOJ that has turned its back on its fundamental mission — to seek and serve justice,” New York Attorney General Letitia James said in a statement. “In memory of Eric Garner and all others who have lost their lives unjustly, we will continue to fight for reforms to a criminal justice system that remains broken.”

New York Mayor and Democratic presidential candidate Bill de Blasio, who has also been criticized by Garner’s family for the city’s handling of its investigation, said on Tuesday that New York City would no longer wait for the results of a federal investigation to begin disciplinary hearings for officers involved in fatal incidents with unarmed civilians. “Years ago, we put our faith in the federal government to act,” de Blasio said Tuesday. “We won’t make that mistake again.”

Civil rights groups note that the end of the investigation into Garner’s death is a powerful reminder that five years after the rise of Black Lives Matter, police accountability remains elusive in many cases.

“This decision is a devastating disappointment,” NAACP Legal Defense and Educational Fund president and director-counsel Sherrilyn Ifill said in a statement. “It constitutes a betrayal of Mr. Garner’s family, New Yorkers, and African Americans across the country who have waited five years for justice in this case.”

“Millions of us watched Eric beg for his life, eleven times, while Officer Pantaleo and other officers around him ignored his cries,” Carmen Perez, executive director of the Gathering for Justice, said in a statement to Vox. “Our communities will never rebuild trust in the police to protect and serve without accountability.”

With the conclusion of the federal investigation, attention now turns to the departmental trialthat recently ended in June. During that trial, prosecutors argued that Pantaleo intentionally restricted Garner’s breathing, and “set into motion a lethal sequence of events“ when he restrained Garner. The defense argued that Garner’s poor health is what led to his death, and that Pantaleo did not use a chokehold, but instead used a different “seatbelt” technique taught to police officers.

Rosemarie Maldonado, the NYPD’s deputy commissioner of trials, still has a few weeks to submit her decision in the case to NYPD police commissioner James O’Neil, who will then decide Pantaleo’s fate.

But the fact that Garner’s death, which drew large protests, seemed poised to lead to criminal charges for Pantaleo at one point only to instead culminate in a decision made by NYPD officials has angered activists and Garner’s family. Now that DOJ charges are off the table, activists are expected to hold protests and demonstrations to call attention to their frustration over the decision.

Garner’s family says that despite this continued struggle for justice, they will continue to push for accountability for not just Pantaleo, but other officers involved in Garner’s death.

Planned Parenthood president ousted after just 8 months on the job!

“We sing about the glories of a happy Christianity, but we don’t talk about the pain!