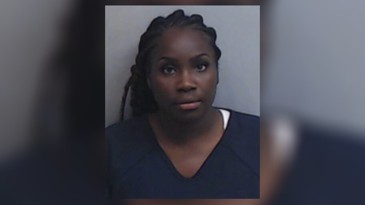 An Atlanta woman was arrested after allegedly threatening students at her son’s bus stop with a baseball bat and pulling a teen’s hair during a fight, authorities said. Tiara...
by Raquel Jayson September 21, 2019 258 Views

An Atlanta woman was arrested after allegedly threatening students at her son’s bus stop with a baseball bat and pulling a teen’s hair during a fight, authorities said.

The charges stem from bus stop altercations Jones and her 15-year-old son were allegedly involved in on Monday and Tuesday, Channel 2 Action News reported.

Cellphone footage obtained by the station appears to show the woman looking on and encouraging her son as he fights with another teen Tuesday afternoon.
Shouts of “keep fighting” can be heard as the Grady High School students roll around on the ground.

The video also appears to show Jones walk up behind a student and yank him by his hair.

A Mother is in jail after she attacked a 15 y/o boy at a bus stop & I have the video. The Mom says the kid was “going to fight her son” but the kid who was attacked has a much different story that police believed. You don’t want to miss this at 5pm on Ch2

The day before, Jones allegedly came to the bus stop with a baseball bat and threatened students who had been arguing with her child, authorities said.

“She was twirling the bat, telling him she was gonna bust him in his head,” parent Alycia Aldridge said. “You don’t get to chase people’s children and approach them with bats.”

Jones’ son is also wanted in connection with the bus stop brawl, but Atlanta police are still searching for him, according to Channel 2. His name has not been released because he is a minor.

Jones remained in the Fulton County jail Saturday on a $60,000 bond.