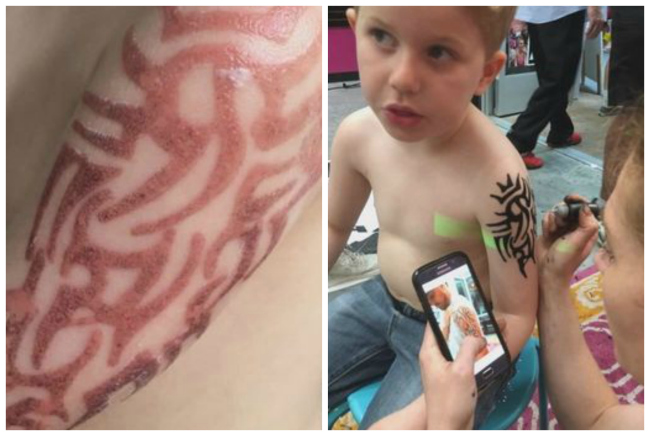 A Northern Virginia boy suffered an allergic reaction after getting a “black henna” tattoo in Virginia Beach during Memorial Day weekend. For $30, five-year-old Peyton Knauer got a henna tattoo...
by Crystal Smith June 24, 2017 1207 Views

A Northern Virginia boy suffered an allergic reaction after getting a “black henna” tattoo in Virginia Beach during Memorial Day weekend.

For $30, five-year-old Peyton Knauer got a henna tattoo that was supposed to be temporary, according to WAVY affiliate WTTG. But the black ink soon started turning red and itchy.

“The ink started going away and the tattoo wasn’t going away,” said Emily Knauer, Peyton’s mother. “It was getting more and more red. It almost looked infected.”

Emily said doctors were at first confused by Peyton’s reaction.

“It’s black ink, they put it on like a pen – [the doctor] goes that absolutely wasn’t henna.” Emily recalled. “It was more of this PPD and I had never heard of that. The first time I’d actually heard about that was when I started noticing this raised skin. I went right on to Google and it’s everywhere.”

The Food and Drug Administration has received reports of adverse reactions to black henna tattoos. The agency says black henna may contain p-phenylenediamine, also known as PPD, which is only supposed to be used as a hair dye. PPD is known to cause reactions in some people, the FDA says.

“Sometimes it is too hot outside and the beach is more hot. Sometimes it bonds the skin,” Nyla, a woman who has been tattooing henna in the United States for roughly a decade, told WTTG.

Nyla says in India, women typically get henna tattoos for good luck or for events like parties or weddings.

Peyton’s mother isn’t sure what exactly was used in her son’s tattoo, but she hopes her story will help others avoid running into the issue.

“I think little ones are more at risk than adults, but we were never warned when we walked into the store,” she said. “If I only had gone onto Google before we did this, I would have saved a lot of time and a lot of heartache.”

Gayle King, Oprah and “O, the Oprah Magazine” prepare for voyage to Alaska