Video: Youth Pastor died while Pinned down in the street and being punched by police 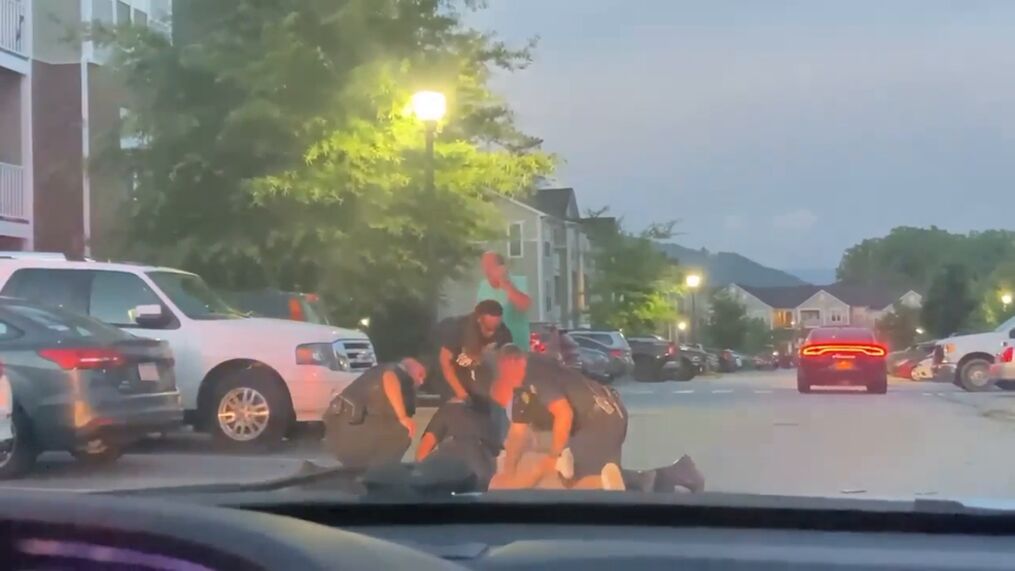 Christopher Hensley, the 35-year-old who died after an alleged “fight” with law enforcement in Henderson County June 15, was a father and a youth pastor.

Law enforcement officials offered few answers June 17 as an SBI investigation was underway, according to a June 16 news release, but a witness’ video, obtained by the Citizen Times, showed Hensley pinned to the street at an apartment complex, surrounded by officers and screaming in pain. One officer in the video appeared to punch Hensley repeatedly, even as he was pinned down.

The video ended with an unresponsive Hensley, limp and on his back, being given CPR by an officer. Another video obtained by the Citizen Times showed him rolled over on his side as law enforcement waited for EMS.

One of Hensley’s neighbors, who witnessed him being pinned down, told the Citizen Times that she saw him get stunned with a Taser at least twice and punched by officers.

“I’ve never seen something so horrible,” she said. “A human being being tased [sic] is something you don’t want to see. (He’s) shaking and his face looks like it’s just turning beet red. He’s trying to take these (taser wires) off of him, and he’s just screaming in agony.”

The neighbor said that she did not understand why officers tazed Hensley. He was resisting arrest, she said, but never threw a punch or fought with officers while she was watching. The situation appeared to be a mental health crisis, she said.

In an initial news release, the Fletcher Police Department said two officers were taken to the hospital for “non-life-threatening injuries.”

Terry said that there were no reports that Hensley was armed, and said that he was the only suspect.

“We were responding to a domestic dispute,” Terry said. “The 911 caller was his wife. We responded there to assist in that matter.”

Terry stressed that he was “in the dark” about details of the incident since it had been handed over to a state agency.

Two Fletcher police officers were at the scene, and both have been placed on administrative leave as the North Carolina State Bureau of Investigation investigates, Terry said.

Yet the video shows, at one point, at least seven uniformed men surrounding Hensley as he is on the ground.

Police asked for backup from the Henderson County Sheriff’s Office, according to the initial news release. The Citizen Times asked HCSO how many of its deputies were at the scene and what support they were there to offer.

“This is an active Investigation being conducted by the NCSBI and we will have no comment on this incident until the conclusion of the NCSBI investigation,” spokesperson Johnny Duncan wrote in an email.

‘A ministry that he loved dearly’

Hensley was a youth minister at a Henderson County church.

“It’s just a tragedy,” said Rapha House Pastor Greg Lewis. “I loved Chris. As a pastor with a pastor’s heart, you love people. I’m just grieving like everyone who knew Chris.”

Hensley moved from Miami to Hendersonville around 2016 and began attending Rapha House, where he was “always volunteering for anything we needed done,” Lewis said.

“He was absolutely one of the hardest workers I knew. I gave him something to do, and he would make it happen effortlessly. We had a big event … We had 800 show up that night. Chris got everybody parked, set up an overflow road … He was just that type of guy.”

Hensley started working with the church’s youth in August 2017 and left Rapha House in October 2018, due to a shortage in funds being available to pay him full-time, Lewis said.

“He had the unique gift to bridge social, economic and cultural diversity,” Lewis said.

The neighbor who spoke to the Citizen Times said that Hensley was well-liked by her and others who lived there, and known to be friendly. He would help bring in groceries, move furniture and work on cars outside.

“He was great with my kids, like my 6-year-old,” she said. “He talked about Elsa and the princesses … It was cute because he’s a big guy.”

A GoFundMe for Hensley’s funeral expenses, set up by one family member, says that he “was a good man who just welcomed his second daughter into this world. He wanted so desperately to see them through life. He leaves behind a 4-year-old, a 3-week old, wife and a ministry that he loved dearly.”

The family member who set up the fundraiser told the Citizen Times that other relatives were waiting to speak with legal representation before commenting.

“There’s something wrong with our system that needs to be fixed,” the neighbor who spoke to the Citizen Times said. She believed that the officers on scene only escalated the situation. With proper training, perhaps things could have been different, she said.