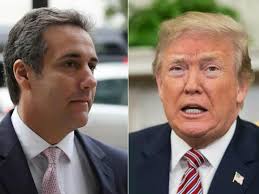 Video: Some Of What Was Revealed By Michael Cohen Regarding President Trump

President Donald Trump’s former fixer and personal attorney Michael Cohen gave details about the “dirty deeds” he says he performed at the direction of his client in his testimony before the...
by Katricia Brown February 27, 2019 281 Views

President Donald Trump’s former fixer and personal attorney Michael Cohen gave details about the “dirty deeds” he says he performed at the direction of his client in his testimony before the House Oversight Committee on Wednesday.

The man who once said he would “take a bullet” for Trump called the president a “racist,” a “con man” and a “cheat,” and brought along pieces of evidence that he said supports his claims. A copy of his written opening statement was obtained by USA TODAY prior to his testimony. Cohen is about to begin a three-year prison sentence for campaign finance violations, tax evasion and lying to Congress. Republicans are expected to attack the credibility of his claims against the president in light of his felony convictions.

“Mr. Trump is an enigma. He is complicated, as am I. He has both good and bad, as do we all,” Cohen said. “But the bad far outweighs the good, and since taking office, he has become the worst version of himself.”

Here are highlights from Cohen’s testimony:

Cohen introduced as evidence before the committee a $35,000 signed check from Trump’s personal account, which Cohen says was part of his reimbursement for a payment to adult film star Stormy Daniels. The payment was made to keep Daniels quiet in the weeks before the election about sexual encounters she claims to have had with Trump in 2006.

Federal prosecutors in New York alleged that Trump’s private business, The Trump Organization, reimbursed Cohen $130,000 for his payment to Daniels, added another $130,000 to cover his taxes, and paid him a $60,000 bonus on top of that. Prosecutors said the company “falsely accounted for these payments as ‘legal expenses.'”

Cohen also shared a copy of the $130,000 wire transfer he sent to Daniels’ attorney.

Prosecutors called the payment, which Cohen says he made at Trump’s direction, an illegal campaign contribution. 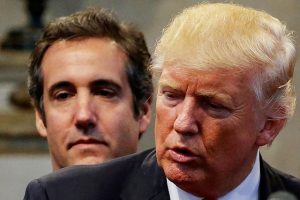 Charges of racism against Trump date back to the 1970s. Those accusations grew with his claims that former President Barack Obama was not an American citizen and with his fiery rhetoric on illegal immigration. But Cohen claimed the public doesn’t know the half of it.

“In private, he is even worse,” Cohen said in his opening statement.

Cohen says that once, when Obama was president, he asked Cohen to try and name “a country run by a black person that wasn’t a ‘shithole.'”

On another occasion, when they were driving through a poor neighborhood in Chicago, Trump told Cohen “only black people could live that way,” according to Cohen. And he claims that Trump once said black people wouldn’t vote for him because “they were too stupid.”

Trump knew about Wikileaks dump ahead of time

Cohen said the president was aware of his associate Roger Stone’s communications with WikiLeaks regarding emails that U.S. intelligence agencies say were stolen by Russian operatives from the Clinton campaign and Democratic National Committee officials.

In Cohen’s statement, he said he heard Trump talk on the phone with Stone in July 2016 about a conversation Stone had with WikiLeaks founder Julian Assange.

“Mr. Assange told Mr. Stone that, within a couple of days, there would be a massive dump of emails that would damage Hillary Clinton’s campaign,” Cohen said.

Trump, who has denied any advance knowledge of the WikiLeaks emails dump, responded, “Wouldn’t that be great?” according to Cohen.

Trump bid on his own portrait

In his opening statement, Cohen outlined how Trump had him arrange for a “straw bidder” to drive up the price of a portrait of Trump at a charity auction.

“The objective was to ensure that his portrait, which was going to be auctioned last, would go for the highest price of any portrait that afternoon,” Cohen said.

The price was driven up to $60,000. Cohen says the fake bidder was then repaid by the Trump Foundation, which is a charitable organization, despite Trump “keeping the art for himself.”

The Trump Foundation was shut down in December as part of an agreement with New York Attorney General Barbara Underwood. Underwood had alleged that the foundation was being used “as little more than a checkbook to serve Mr. Trump’s business and political interests.” 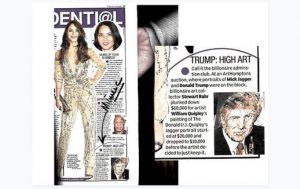 Attorney Talks In Detail About Alleged Acts R.Kelly Had With A 14 Year Old Girl

One Of The Pace Sisters Go In Hard On Tamar Braxton For Shading Her Sister Duranice Pace!