Video: Future tells why he didn’t want to reveal this to his fans

Future’s brand is invariably connected to drinking lean, so it’s not surprising to learn he wanted to keep his lack of use under wraps. In a new interview...
by Katricia Brown January 16, 2019 359 Views 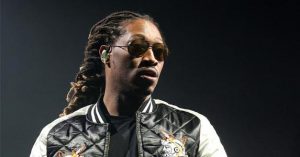 Future’s brand is invariably connected to drinking lean, so it’s not surprising to learn he wanted to keep his lack of use under wraps. In a new interview with Genius, the Freebandz leader said he was hesitant to admit he stopped drinking the purple stuff because he didn’t know how fans would react.

The revelation occurred when Genius’ Rob Markman asked Future about what drives him as an artist after years of success. The hitmaker spoke about the pressure to live up to the expectations of his fans.

“That’s why I said what drives me is me from living every word and being that same way. And just being this person, being that rock star,” he stated around the 12-minute mark. “So it drives you, you know what I’m saying, to keep continuing to make the music and continue to be in the music. The fans, what they love you for. And it’s hard, because it just be like, ‘Damn, I don’t want to stop it and the fans stop loving me.’”

Future explained how quitting lean tied into this pressure of maintaining his established persona. The platinum-selling artist worried about how this new reality would affect the perception of the man behind songs like “Codeine Crazy.”

“It’s like me taking chance on when I was… I didn’t want to tell nobody I stopped drinking lean,” he continued. “I didn’t want to tell because I felt then they gonna be like, ‘Oh, his music changed because he ain’t drinking lean no more. Oh, I can hear when he changed.’ And people are like, ‘Damn, you won’t even say it.’ It’d just be hard and your fans so used to you a certain kind of way with a certain persona, you be afraid to change. You’re afraid if they would not even accept me no more.”

Check out the entire interview with Future below. The rap superstar’s new album, The WIZRD, is scheduled to drop this Friday (January 18)

Video: Caught….Women twerking on top of a truck on a crowded freeway