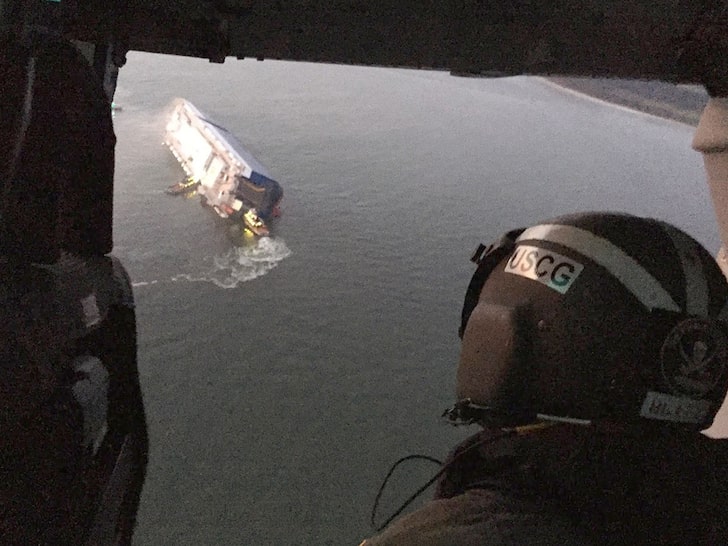 8:41 AM PT — 9/9 — All 4 of the missing crew members were found alive after rescuers drilled into the ship’s hull … according to the AP.

The U.S. Coast Guard is on a search and rescue mission for four missing crew members of a cargo ship that completely flipped over off the shores of Georgia.

The 656-foot long vessel — which was carrying a bunch of vehicles and leaving a major port near Brunswick, GA very early Sunday AM — was said to be tipping to its left side shortly after it started moving. Eventually, it completely capsized, and the CG was dispatched.

Reports say that a fire broke out on-board after it started tipping over, but eventually the billowing smoke ceased. Of the 23 crew members and one pilot on the ship, all but 4 have been accounted for so far, according to the military branch. Their search continues.

It’s unclear at this point what exactly caused the cargo ship to begin to tip in the first place — and the Coast Guard won’t say definitively if Hurricane Dorian had anything to do with it.

It’d be strange if Dorian did affect this somehow — as the hurricane made brief contact with Georgia last week, but it has since moved north and been downgraded significantly.

Some witnesses say the cargo ship was passing another vessel that was coming into the port as it started heading out, and suggested that might’ve had something to do with causing the tip. That hasn’t been confirmed though by the Coast Guard.

Whatever it was … it was a force strong enough to completely flip over this giant machine. Scary stuff, no doubt.

Cleveland Brown Fan Fell Off Of A Van And Had A Seizure On LIVE TV.