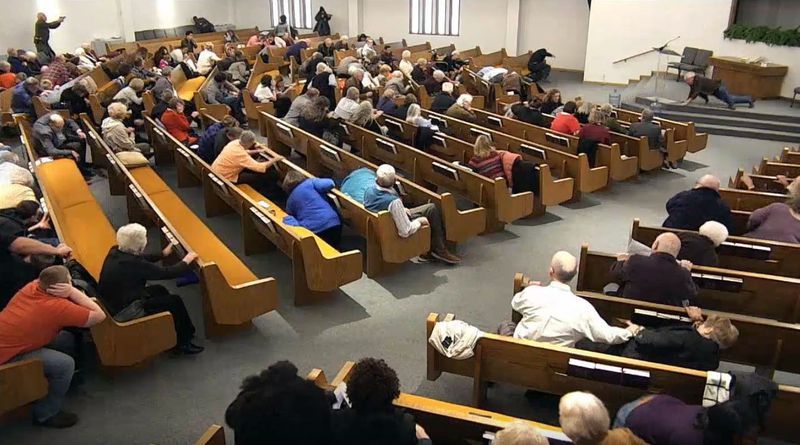 TWO people have died and one is fighting for life after a church shooting in Texas.Members Had Weapons And Shot Shooter!

TWO people have died and one is fighting for life after a church shooting in Texas. The shooter opened fire inside the West Freeway Church of Christ in Fort...
by Zach Freeman December 29, 2019 408 Views

TWO people have died and one is fighting for life after a church shooting in Texas.

The shooter opened fire inside the West Freeway Church of Christ in Fort Worth.

One person died at the church around 10am, while another died on the way to hospital – both are thought to be men.

Authorities have said the gunman was among those taken to hospital, with reports later saying the shooter was dead – but this hasn’t been confirmed by police.

The church was live-streaming the service, with parishioners reportedly seen ducking behind pews.

According to witnesses the gunman walked up during communion and opened fire, before a church-goer shot them.

In footage of the attack someone appears to stand up and fire twice with a rifle or shotgun.

A member of the congregation fires back as others rushed towards the shooter with their own guns, as a church leader calls for calm.

Isabel Arreola told KTVT: “It was the most scariest thing. You feel like your life is flashing before you. I was so worried about my little one.”

Two people were treated for minor injuries at the scene, an ambulance spokeswoman said.

Mike Drivdahl, Fort Worth Fire Department spokesman told Dallas News: “Our hearts and prayers go out to all the families that were affected by this incident.

Texas Governor Greg Abbott said: “Our hearts go out to the victims and families of those killed in the evil act of violence that occurred at the West Freeway Church of Christ.

“Places of worship are meant to be sacred and I am grateful for the church member who acted quickly to take down the shooter and help prevent further loss of life.”

Texas Attorney General Ken Paxton said he was “shocked and saddened”.
He added: “As reports come in, please pray for any victims and their families, this congregation, and the law enforcement officials at the scene. My office will assist in any way needed.”

We pay for your stories!

This Celebrity Had A Secret Love Child With Neighbor While His Wife Was Pregnant With Their Child.

A 24 Year Old PHD Student Was Killed By Her Professor Lover: Legs Found In River