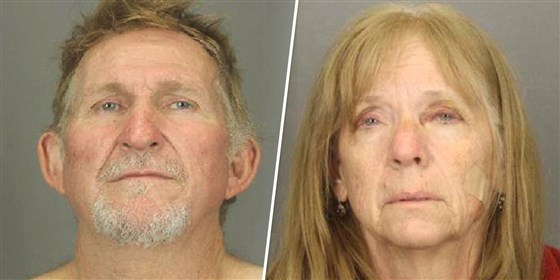 Blane and Susan Barksdale have been on the run since they overpowered guards as they were being extradited to Arizona late last month. Husband-and-wife murder suspects who overpowered two...
by Alycia Pascual-Pena September 12, 2019 212 Views

Blane and Susan Barksdale have been on the run since they overpowered guards as they were being extradited to Arizona late last month.

Husband-and-wife murder suspects who overpowered two guards to escape custody have been captured after more than two weeks on the run, the U.S. Marshals Service said late Wednesday.

Blane Barksdale, 56, and Susan Barksdale, 59, escaped in Utah on Aug. 26 while being extradited from upstate New York to Arizona. The Barksdales are charged in the Arizona murder of Frank Bligh, 72, whose body has not been found. His Tucson home was set on fire April 16, and authorities have said the blaze was started to cover up the killing.

A law enforcement source familiar with the investigation told NBC News on Wednesday night that the pair was taken into custody south of Payson, Arizona, in an area known as Tonto Basin. The area is northeast of Phoenix in the Tonto National Forest and about 260 miles from where they escaped.

Late last month as the couple was being transported back to Arizona, Susan Barksdale faked an illness to get the van they were in to stop, officials have said. When the vehicle pulled over near Blanding, Utah, the couple overpowered the two guards as they opened the rear doors, David Gonzales, U.S. marshal for Arizona, has told the Associated Press.

Neither of the guards was hurt, but they were bound with shoelaces, Gonzales said. A third inmate in the van wanted no part of the escape.

The Barksdales drove the van with the three captives locked inside to Vernon, Arizona, where they got a red GMC truckthe U.S. Marshals Service has said. They then abandoned the van with their three prisoners inside.

The guards were reportedly able to free themselves two or three hours later by kicking out some windows.

Payson, Arizona is around 257 miles southwest of Blanding, Utah, where the escape occurred, and around 90 miles west of Vernon, Arizona, where authorities think the couple got the truck.

Earlier this week, Blane Barksdale was added to the U.S. Marshals’ 15 “most wanted” list, and authorities said described him as a career criminal who is believed to be connected to the Aryan Brotherhoodand white supremacist gangs.

The Barksdales were arrested in upstate New York in May following a nationwide manhunt, officials said.

Last month’s transport of the two accused killers was being conducted by a private company, STS. The Pima County Sheriff’s Department has said that it has suspended the use of the transport company, STS, pending a review of the escape.

The sheriff’s department said it is one of eight counties in the state that use a private transport company because of the cost of extradition.