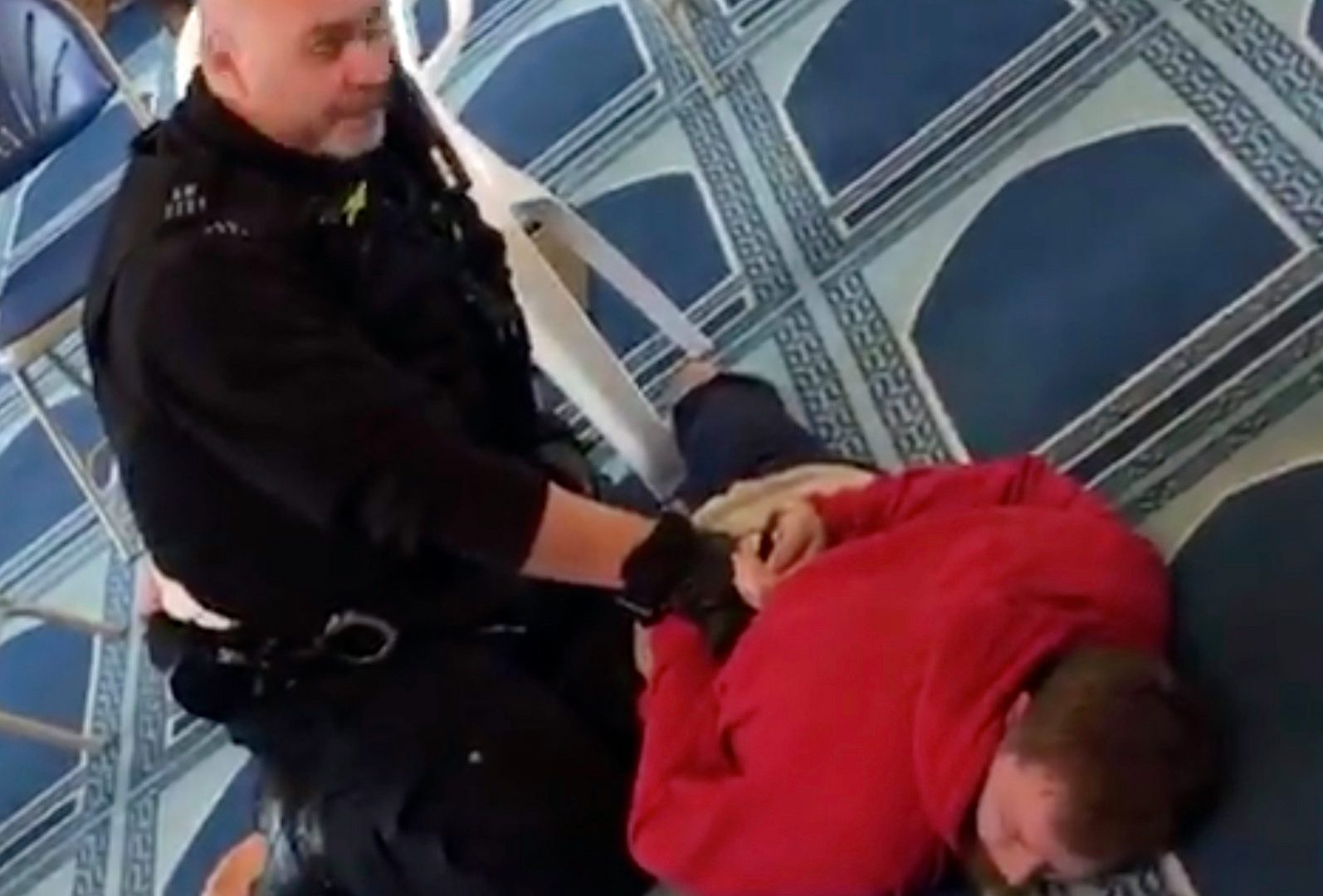 TWENTY hero worshippers tackled a knifeman who stabbed a Muslim leader in the neck during a call to prayer at a London mosque. A 29-year-old man was arrested on...
by Raquel Jayson February 20, 2020 326 Views

TWENTY hero worshippers tackled a knifeman who stabbed a Muslim leader in the neck during a call to prayer at a London mosque.

A 29-year-old man was arrested on suspicion of attempted murder after police were called to London Central Mosque shortly after 3pm today.

Dramatic pictures show the suspect sitting cross-legged on the floor as he was handcuffed by police.

The victim who has been named by mosque-goers as 69-year-old Raafat, was rushed to hospital but his injuries are not believed to be life-threatening.

Worshippers say the silent attacker broke off from prayers to stab the prayer leader from behind with a five-inch blade.

Abi Watik, 59, a regular worshipper, told The Sun Online he saw the attacker stab the Muazzin – a senior figure at the mosque – before up to 20 worshippers took down the knifeman.

He said: “[The guy] got a knife for no reason. I have seen him many times.

“We heard the Muazzin, he was screaming. We did not know what was going on.

“(The victim) fell on the floor with a scream. He had lots of blood here [points near shoulder].

“He stabbed him one time. It was like a small kitchen knife, about five inches.

“Twenty people jumped on him. One person kicked him in the back then he put him on the floor.”

What we know so far:

Mr Watik added: “The attacker was behind the Imam. The victim had just said ‘Allahu Akbar’ and five seconds later he was stabbed in the right shoulder.

“He was about 30 years old and maybe Albanian.

“I had first seen him at the mosque six months ago. The victim is called Raafat. He had worked at the mosque since 1991. We are all shocked. Nothing like this has happened before.”

In a video message posted on Twitter, the witness said: “The Imam, before he led the Salat (Muslim prayer), all of a sudden this racist, terrorist person came and stabbed him on his neck.

“He was actually going for the Imam, to stab the Imam, but the Muezzin was trying to protect. And then he got stabbed in the neck.”

In a video posted on Twitter by the Mend Community charity, Shaykh Ashiqur Rahman, the Imam’s brother, said the Muazzin stepped in and “saved his life”.

He claimed the attacker had previously been at the mosque and was “pretending to be a convert muslim” and had been seen laughing during sermons, before today’s “vicious attack”.

Around 300 people are believed to have been in the mosque when the incident took place.

Central London Mosque is one of the biggest in the country and can hold up to 5,000 people.

A statement by the mosque said: “There was an incident today at London Central Mosque where an unknown individual attacked and stabbed the Muazzin (the person who makes the call to prayer) during Asr Prayer around 3pm.

“The attacker was apprehended by the worshippers until the Police arrived and arrested him.

“The Muazzin did not sustain any life threatening injuries but was seriously injured and is being treated at the hospital.”

Mustafa Field, director of the Faiths Forum for London, told reporters outside the mosque that worshippers had said it was “one stab, one strike, around the neck” of the victim.

He said: “Then the congregation members, some of them broke their prayers, and intervened, restrained the individual.

“The mosque security called the police, and the police were there within minutes, and he was restrained and taken away.”

Ayaz Ahmad, adviser to the mosque, said: “It would have been life threatening if it wasn’t for the worshippers who help stopped the guy and apprehend him.”

Mr Ahmad, who witnessed the attack, said: “Everybody’s reaction was shock and horror. It was a vicious attack.”

Waleed Mohammed, 39, said he thought the attacker came to the mosque to “scope what he wanted to do” and was not a regular.

He said: “If he wasn’t stopped he would have murdered him. There is only one Rafaat in the mosque, his voice comes out of that minaret five times a day, for this to happen right at the end of his career is very, very sad for the whole Muslim community.”

The victim’s friend, Waleed Mohammmed, 39, said the knifeman had come into the mosque previously to enquire about Islam.

He said: “I spoke to the manager he said this was a regular guy who came in to enquire casually.

“Security said this guy had been in once or twice to walk around.”

Waleed added: “Raafat is a friend of mine. He was attacked by a coward. I hope he finds the strength to recover.”

Prime Minister Boris Johnson said he was “deeply saddened” by news of the attack.

He said: “I’m deeply saddened to hear of the attack at the London Central Mosque.

“It’s so awful that this should happen, especially in a place of worship.

“My thoughts are with the victim and all those affected.”

“Thoughts are with victim, those directly affected and wider community. Grateful for rapid response of police and emergency services. Police must now be given space to investigate.”

Teacher, 26, died accidentally taking too many paracetamol tablets for a urinary tract infection.