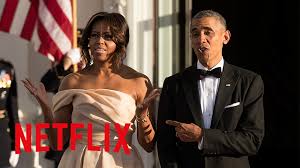 Trump Wants the Government to Investigate Obama’s Netflix Deal Since they left the White House, the Obamas inked the reportedly “high-8-figure” partnership with Netflix and a joint book deal...
by Jasmin Williams September 16, 2019 187 Views

Since they left the White House, the Obamas inked the reportedly “high-8-figure” partnership with Netflix and a joint book deal reportedly worth $65 million.

President Donald Trump kicked off his week with one of his favorite hobbies: calling for the investigation of his perceived political enemies.

Trump fired off tweets Monday suggesting that former President Barack Obama should be investigated for getting a production deal with Netflix.

“House Judiciary has given up on the Mueller Report, sadly for them after two years and $40,000,000 spent – ZERO COLLUSION, ZERO OBSTRUCTION. So they say, OK, lets look at everything else, and all of the deals that “Trump” has done over his lifetime,” Trump posted.

“But it doesn’t work that way. I have a better idea,” he added. “Look at the Obama Book Deal, or the ridiculous Netflix deal. Then look at all the deals made by the Dems in Congress, the ‘Congressional Slush Fund,’ and lastly the IG Reports. Take a look at them. Those investigations would be over FAST!”

It’s not clear why Trump might think Obama’s post-presidency ventures are worth investigating. But they have proven lucrative: The former president and former first lady Michelle Obama inked the reportedly “high-8-figure” deal with Netflix and a joint book deal reportedly worth $65 million. The Obamas have launched a number of projects with Netflix already, including a documentary about a factory opening in Ohio and a drama about post-WWII New York.

Monday wasn’t the first time Trump got hung up on investigating the money the Obamas have made since they left the White House.

“We want to find out what happened with the last Democrat president,” Trump told reporters in July. “Let’s look into Obama the way they’ve looked at me. From Day 1, they’ve looked into everything that we’ve done. They could look into the book deal that President Obama made. Let’s subpoena all of his records.”

Kourtney is Hating on Kylie