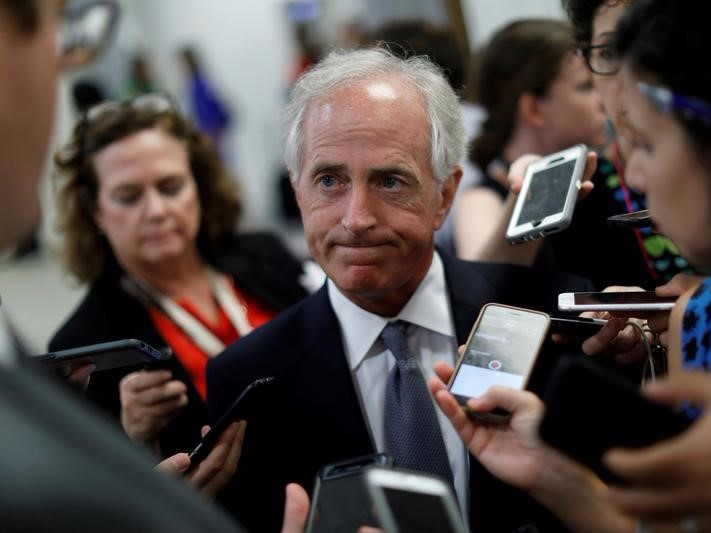 Washington (CNN)President Donald Trump and outgoing Sen. Bob Corker launched into a Twitter spat Sunday morning in a major public falling out, making the Tennessean the latest senior Republican lawmaker to openly criticize Trump over his statements online and off.

Trump tweeted Sunday morning in a series of posts attacking Corker that he denied the senator’s request for an endorsement — a claim denied by Corker’s chief of staff, Todd Womack, later in the day.
“The president called Senator Corker on Monday afternoon and asked him to reconsider his decision not to seek reelection and reaffirmed that he would have endorsed him, as he has said many times,” Womack said in a statement.
Trump told Corker he was going to endorse him the day the Tennessee Republican announced his intention to retire, two sources familiar with the discussions said.
Corker, whose term expires at the end of next year, made the announcement that he would retire late last month.
Trump’s slams on Corker come days after the senator made public comments criticizing him. The senator responded to Trump’s tweets with an insult later in the morning, calling the White House “an adult day care center” in a Twitter post.
And he wasn’t done there.
In remarks to The New York Times published on Sunday night, Corker said Trump was treating the presidency like “a reality show,” making reckless threats against other countries that put the United States “on the path to World War III.”
Corker also said Trump acts “like he’s doing ‘The Apprentice’ or something,” and that alarmed the senator, according to the Times.
“He concerns me,” Corker told the newspaper. “He would have to concern anyone who cares about our nation.”
And the risks Trump’s behavior presents also concern some of his top officials, who endeavor daily to protect the President from his own instincts, the Times reported.
“I know for a fact that every single day at the White House, it’s a situation of trying to contain him,” Corker told the newspaper.
The flare-up between the two leaders highlights the long-simmering differences between GOP leaders and the President, who has not shied away from attacking the leadership over their inability to move health care legislation. It also comes as Trump prepares to press Congress to advance his proposed tax overhaul and tensions reportedly grow between Trump and members of his own Cabinet — especially Secretary of State Rex Tillerson — on issues such as the way to handle North Korea’s nuclear weapons program.
Corker’s vote will be critical on tax reform, and he remains an influential voice on Trump’s foreign policy challenges, including over how to handle the Iran nuclear deal.
It’s not the first time Trump and the White House have privately sent one signal to Corker while publicly saying something else. Following Corker’s pointed attack on Trump for his handling of the deadly violence in Charlottesville, Virginia, in August, Vice President Mike Pence quietly sought to repair ties with Corker after the President knocked the Tennessee Republican on Twitter, sources said.
On Sunday morning, Trump again launched an attack on Corker.
“Senator Bob Corker ‘begged’ me to endorse him for re-election in Tennessee. I said ‘NO’ and he dropped out (said he could not win without…” Trump tweeted. “..my endorsement). He also wanted to be Secretary of State, I said “NO THANKS.” He is also largely responsible for the horrendous Iran Deal!”
“…Hence, I would fully expect Corker to be a negative voice and stand in the way of our great agenda. Didn’t have the guts to run!” Trump added.

Senator Bob Corker “begged” me to endorse him for re-election in Tennessee. I said “NO” and he dropped out (said he could not win without…

..my endorsement). He also wanted to be Secretary of State, I said “NO THANKS.” He is also largely responsible for the horrendous Iran Deal!

…Hence, I would fully expect Corker to be a negative voice and stand in the way of our great agenda. Didn’t have the guts to run!

Twitter Ads info and privacy
The President continued to slam Corker in a tweet in the late afternoon.
“Bob Corker gave us the Iran Deal, & that’s about it. We need HealthCare, we need Tax Cuts/Reform, we need people that can get the job done!” he wrote.

Bob Corker gave us the Iran Deal, & that’s about it. We need HealthCare, we need Tax Cuts/Reform, we need people that can get the job done!

Twitter Ads info and privacy
Corker responded on Twitter after Trump’s initial tweets: “It’s a shame the White House has become an adult day care center. Someone obviously missed their shift this morning.”

It’s a shame the White House has become an adult day care center. Someone obviously missed their shift this morning.

Twitter Ads info and privacy
Bharara was fired by Trump a few months into his presidency.
Later Sunday, California Democratic Rep. Ted Lieu expanded on Trump’s relationships with members of Congress, saying Corker’s response highlighted why Republicans have not been able to pass major legislation this year.
“Donald Trump is a weak President with low approval ratings who does not command respect on Capitol Hill,” Lieu told anchor Ana Cabrera on “CNN Newsroom.” “As a result, Trump can’t deliver the votes when he needs it. And to make matters worse, Donald Trump is not trying to build relationships. He lashes out and insults members of Congress. And keep in mind, Trump’s deficit-exploding tax plan can only lose three Republican Senate votes before it dies.”
“I wish I could replay what people tell me on the floor from my colleagues across the aisle,” Lieu continued. “I can’t do that, but they are similar to Senator Corker. I could just say this, the President is not respected by many members of Congress. You’re seeing that play out in terms of failed legislation, and you see that played out when the President goes after and singles out individual members of Congress and attacks them. That’s not how you build relationships.”
Corker, who chairs the Senate foreign relations committee, defended his record on the Iran deal in an op-ed in The Washington Times last year, saying he led Senate opposition to the Obama-era pact and was joined by almost the entire Senate and House in passing legislation in 2015 to establish a process for congressional review.
“Without it, there would have been no requirement that Congress receive full details of the deal; no review period for Congress to examine and weigh in on the agreement; no requirement that the president regularly certify that Iran is complying; and no way for Congress to rapidly reimpose sanctions should Iran cheat,” Corker wrote.
The senator has also made some critical comments about Trump’s demeanor and temperament in recent weeks.
Corker said in August that Trump had not yet demonstrated “the stability nor some of the competence” he needed to be successful.
He said Wednesday that Tillerson, Defense Secretary James Mattis and White House Chief of Staff John Kelly “help separate our country from chaos.”
Corker also said Tillerson has not received the support he needs from Trump.
“I mean, look, I see what’s happening here,” Corker said. “I deal with people throughout the administration and (Tillerson), from my perspective, is in an incredibly frustrating place, where, as I watch, OK, and I can watch very closely on many occasions, I mean you know, he ends up being not being supported in the way I would hope a secretary of state would be supported, that’s just from my vantage point.”
close dialog
Tillerson, who has reportedly been displeased with Trump and his own role in the administration, made a public statement last week reaffirming his support for the President after news reports spoke of acrimony between the two men — principally, that Tillerson had questioned Trump’s intelligence, calling him a “moron,” in front of other top officials.
Tillerson’s statement of support for Trump prompted the President to say his secretary of state had refuted the story about the insult. Trump later told reporters inside a Las Vegas hospital, where he was visiting the victims of last Sunday’s mass shooting, that he has “total confidence” in Tillerson and said reports that the secretary of state called him a moron were “fake news” and “totally made up.”
source:
Categories
Politics
SHARE THIS ARTICLE
OLDER ARTICLE