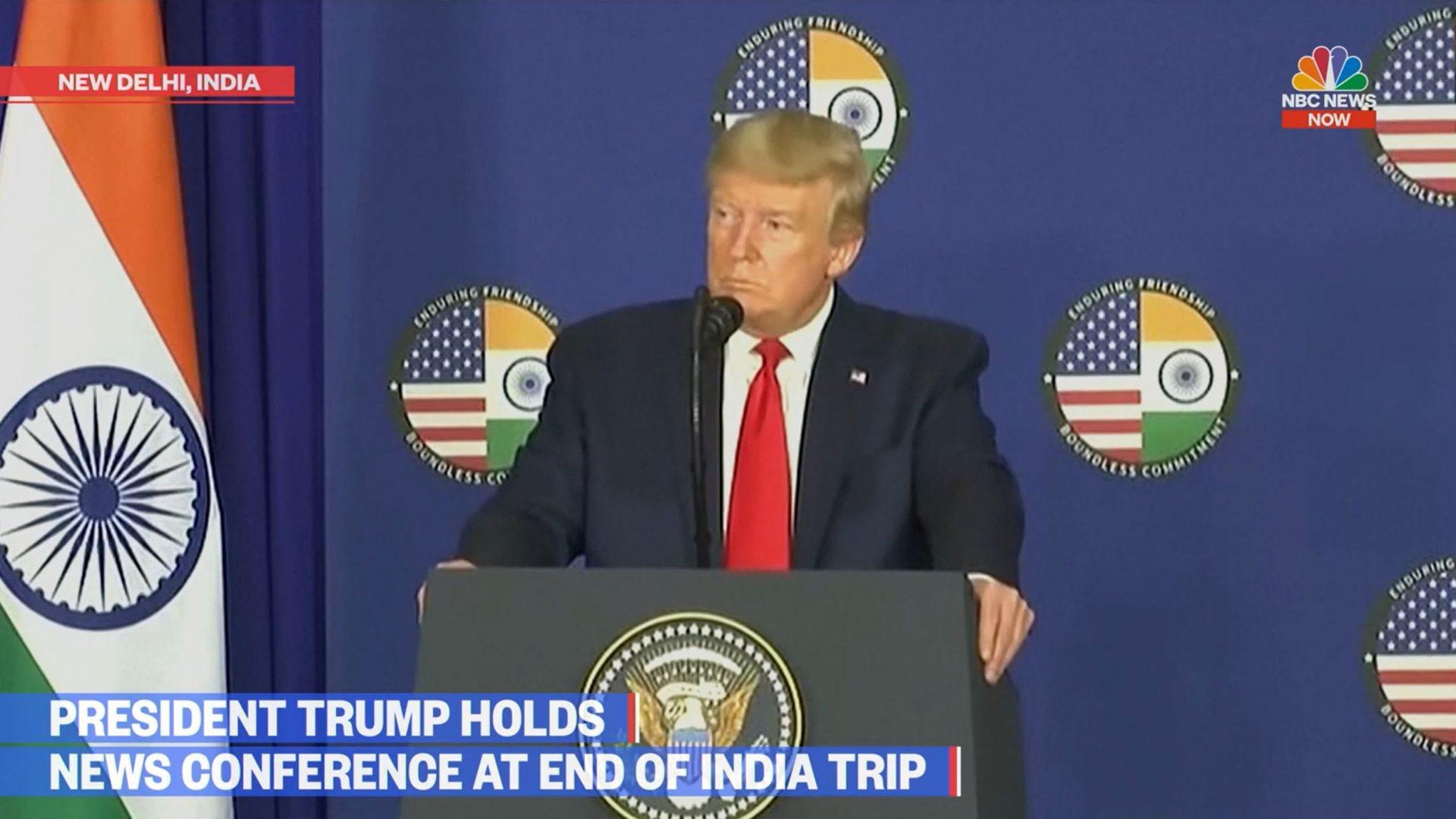 Trump finished off his trip to India with a press conference Tuesday where he issued the explosive comments about Weinstein.

When asked about his views on the disgraced producer who was found guilty of third-degree rape and first degree sexual assault yesterday, Trump said Obama and Clinton were big fans of the convicted rapist.

The president went on to say “the people that liked him were the Democrats,” asking whether they would return Weinstein’s donations to the party.

“Michelle Obama loved him, Hillary Clinton loved him,” Trump added. “He gave a lot of money to the Democrats.”

But Trump said he was “never a fan of Harvey” because the Hollywood bigwig “said he was going to work hard to defeat me.”

“He was a person I didn’t like,” Trump added, explaining that he didn’t know much about the case. “I was just not a fan of his.”

“I knew him because he was in New York,” Trump explained, before declaring that the guilty verdict – for which Weinstein faces 25 years in prison – was a victory for American women.

“I don’t know the actual results,” he said, citing his visit to India. “I think that from the standpoint of women … it was a great victory and it sends a very strong message.”

Trump’s statements come after a video of Obama effusively praising Weinstein, 67, as a “wonderful human being” resurfaced on Twitter following his court appearance on Monday.

The footage of the 2013 White House event was shared by Wojciech Pawelczyk, the video editor for former Trump aide Steve Bannon’s radio show “The War Room.”

In it, the former First Lady said: “I want to start by thanking Harvey Weinstein for organizing this amazing day.

“This is possible because of Harvey. He is a wonderful human being, a good friend and just a powerhouse.

“The fact that he and his team took the time to make this happen to all of you should say something not about at me or about this place, but about you. Everybody here, here because of you.”

[Harvey] is a wonderful human being, a good friend and just a powerhouse.Michelle Obama

Clinton was also quizzed about Weinstein’s donations to her campaign this week, the former presidential hopeful pointed out he donated to Barack Obama, John Kerry and Al Gore’s campaigns.

She defended her association with Weinstein, saying it was “something that everybody thought made sense,” reports Newsweek.

She said: “How could we have known? He raised money for me, for the Obamas, for Democrats in general.

“I don’t know whether that should chill anyone else from contributing to political campaigns, but it certainly should end the kind of behaviour that he was just convicted for.”

“The jury’s verdict really speaks for itself,” Clinton told Reuters. “It was time for an accounting.”

The Weinsteins reportedly donated $46,350 to Clinton and HILLPAC, which is a committee Clinton used to support other Democrats when she was a senator.

Trump’s comments come after Weinstein was convicted on two of five counts of sex crimes brought against him in a Manhattan court yesterday.

He had pleaded not guilty to all five before the previously deadlocked jury came to a definitive conclusion yesterday afternoon and is now in police custody.

Boy, 11 Dies From Heart Failure After Doctor Sent Him Home From ER.