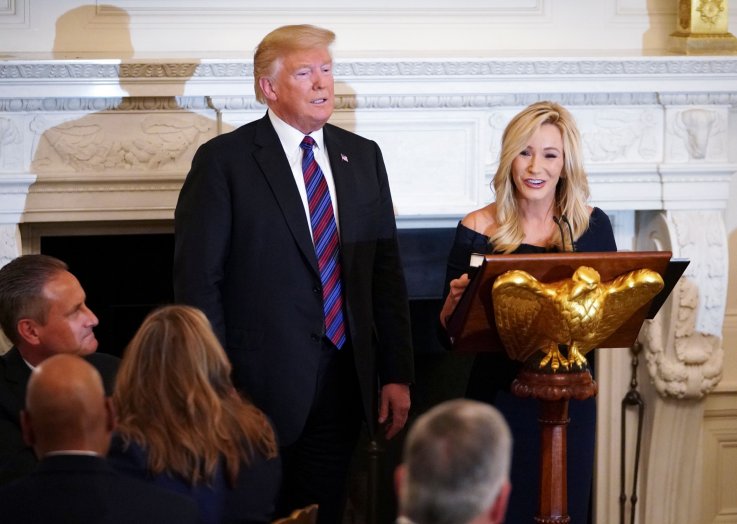 Newsweek article: President Donald Trump’s personal pastor and spiritual advisor Paula White is asking followers to give her $229 in order to receive “prophetic instruction” on how to defeat...
by Raquel Jayson November 18, 2019 333 Views

Newsweek article: President Donald Trump’s personal pastor and spiritual advisor Paula White is asking followers to give her $229 in order to receive “prophetic instruction” on how to defeat the enemies in their lives this November.

In an email to her newsletter subscribers Thursday, White said she has “prayerfully focused on November as a month for a victory over enemies” and said dark spiritual forces are stopping her believers from achieving a “complete breakthrough in every area of your life.”

The request for money in exchange for this so-called prophetic instruction comes just two weeks after the Trump administration appointed White to head up the White House’s new Faith & Opportunity Initiative, which was founded by executive order last year.

“I decree a prophetic instruction for a SUDDEN DEFEAT OVER YOUR ENEMIES! Victory is yours,” said the email sent to White’s followers on Thursday.Ads by scrollerads.com

The email lists seven “principles” about the spiritual warfare believers find themselves facing in the month of November, including that “there is an enemy in your life” and “the warfare you find yourself in is dangerously aggressive.”

The email also contains a link to an audio message recorded by White in which she says that by following her instructions “your pharaoh is about to drown, your Judas is about to hang himself.”

In order to receive White’s instructions on defeating enemies, the televangelist asks followers to pay $229, which she says is “in accordance with” 1 Chronicles 22:9 in the Bible. The verse speaks about peace and rest from enemies.

“It is a specific seed, numbers are important to God,” says the email.

However, people who cannot pay $229 are invited to instead pay $31, a number reached by adding the numbers of the verse in the Bible—22 and 9.RELATED STORIES

“But I believe that God was very clear when I received this word that the $229 seed given in faith can break any chains,” the email adds, again urging people to pay the full $229.

White tells believers that in exchange for their money they will receive a “teaching series” on how to defeat their enemies. This series, she says, contains knowledge on the “legal maneuvering of the spirit realms.” Believers will also receive a bottle of anointing oil that White says she has prayed over personally. “I need you to apply the anointing oil to your head, loved ones, house, vehicle, even your checkbook- anywhere you feel attack!!” the email says.

White is an evangelical preacher who practices so-called “prosperity gospel,” which teaches that God rewards believers financially. Her appointment to the White House administration has been controversial, with the executive director of President Barack Obama’s Office of Faith-Based and Neighborhood Partnerships Melissa Rogers saying earlier this week it is “wrong” that “White continues to hawk religion-themed items, including items she promises will reward buyers spiritually and materially.”