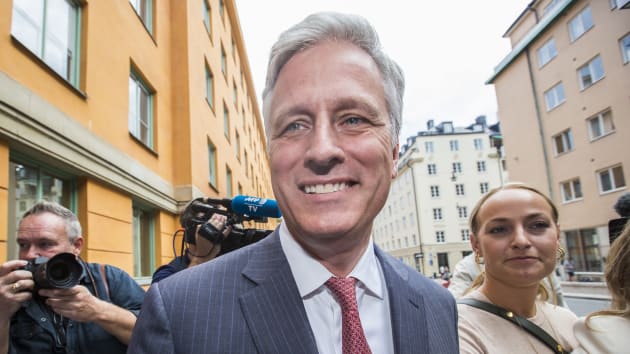 STOCKHOLM, SWEDEN – AUGUST 02: Robert C. OBrien, special envoy sent by Donald Trump, returns to the courthouse after the lunch break on the third day of the A$AP Rocky assault trial at the Stockholm city courthouse on August 2, 2019 in Stockholm, Sweden. American rapper A$AP Rocky, real name Rakim Mayers, along with Dave Rispers and Bladimir Corniel are on trial for assault after an alleged confrontation with a man in Stockholm in June. (Photo by Michael Campanella/Getty Images)Michael Campanella | Getty Images News | Getty Images

While O’Brien’s recent work primarily dealt with matters involving U.S. hostages, he was assigned by Trump to help free rapper A$AP Rocky, who was detained in Sweden on assault charges over the summer. The rapper was found guilty, but was spared from jail time.

O’Brien was also a partner in a boutique law firm focusing on high-stakes trials and appeals, and was a foreign policy advisor to Mitt Romney during the Utah senator’s presidential run against then-President Barack Obama in 2012.

O’Brien attended an Oval Office event in March, where Trump greeted a freed U.S. citizen who had been held in Yemen. The president called O’Brien “the greatest hostage negotiator in our history” at that event.

In selecting O’Brien, Trump said: “I have worked long & hard with Robert. He will do a great job!”

The national security advisor does not require Senate confirmation. The position comes with a staff of hundreds of specialists from the Pentagon, State Department and U.S. intelligence agencies.

The White House, Pentagon and State Department did not respond to CNBC’s requests for comment on the president’s announcement.

Bolton, who was named national security advisor to succeed McMaster in March 2018, was known for his hardline approach to foreign policy, including calls for a pre-emptive strike on Iran and a hawkish position on North Korea. Trump announced on Sept. 10 that he fired Bolton saying that his advisor “disagreed strongly with many of his suggestions.” Bolton said he resigned.

Trump has said he fired Flynn for lying to the FBI and Pence about his contacts with foreign officials, while the president was reportedly frustrated with McMaster’s detailed reports on national security matters.

O’Brien’s ascension comes as the Trump administration has pulled the United States back from global commitments and pushed forward on ambitious projects like the denuclearization of North Korea, a growing military footprint on the southwest border with Mexico, rising tensions with Iran, a bitter trade war with China and a recently aborted effort to negotiate the end of the U.S. war in Afghanistan.