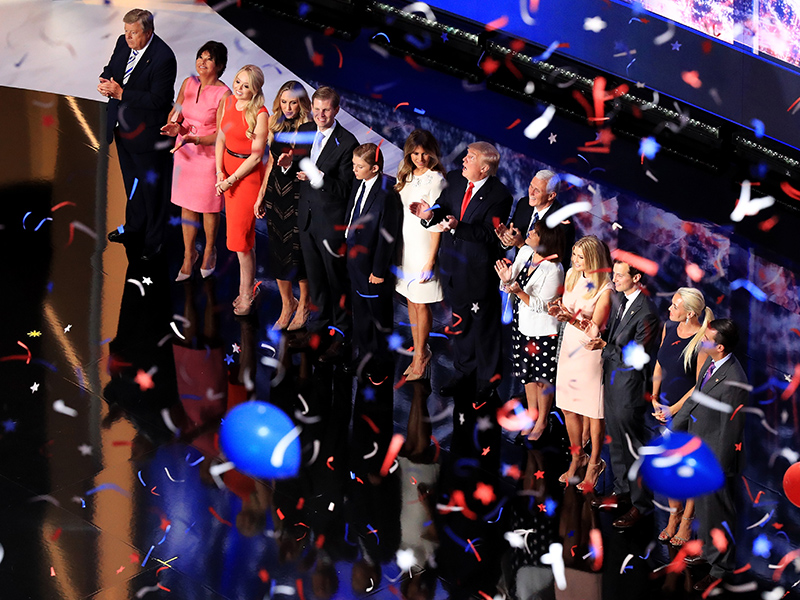 Donald Trump Jr shared photo of President Trump and his son and grandsons The President can be seen making ‘bunny ears’ behind Barron Trump’s head The photograph was taken at...
by Zach Freeman December 29, 2017 567 Views 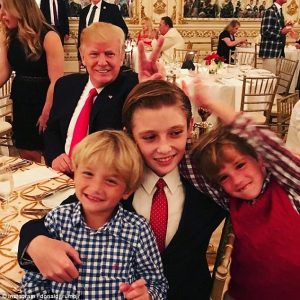 Donald Trump Jr. shared an intimate moment from the First Family’s Christmas Eve dinner when the President photobombed his son and grandsons.

The photo, shared on Trump Jr’s Instagram shows Barron Trump with his arms around his nephews Spencer and Tristan.

Unbeknownst to Barron, his father is giving him ‘bunny ears’ behind his head as Trump Jr takes the photo.

Most of the Trump family has been spending the holiday period at Trump’s Palm Beach, Florida estate Mar-a-Lago.

Rumors of any tension between the President and his son-in-law Jared Kushner were dispelled on Christmas Day as the two men spent the dinner deep in conversation alongside their wives.

Jared and wife Ivanka were seen dining opposite the President and First Lady at Mar-a-Lago, where the group sat in the center of the dining room behind a velvet rope.

They were joined at the table by Tiffany Trump, Trump Jr and his wife Vanessa with their children, and President Trump’s siblings Maryanne and Robert.

The family have also been spending time fishing on the estate, with both Trump jr and the Kushner family posing for photos with their catch.

‘To any kid, this fish is a trophy!’ Ivanka on a  series of photos she posted on Instagram after the group’s fishing trip.

President Trump has also enjoyed some rest and relaxation, as he has been seen heading off to the golf course several days in a row.

He has been criticised in particular for the decision to play golf on Boxing Day after tweeting on Monday: ‘I hope everyone is having a great Christmas, then tomorrow it’s back to work in order to Make America Great Again (which is happening faster than anyone anticipated)!’

Holiday Horror As Family Of Four Is Found Murdered At Their Home, Bound With Their Throats Slashed