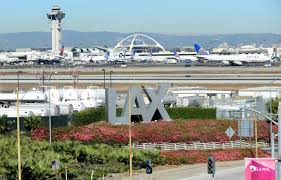 For the third time in two months, public health officials are warning travelers of possible measles exposure at Los Angeles International Airport after an infectious person traveled between terminals there.

Someone with the highly contagious illness landed April 3 in Terminal 7 at Gate 70A, then ate at the B Grill by BOA Steakhouse at LAX Terminal 7 Departures before departing the airport from Terminal 8, Gate 81, the L.A. County Department of Public Health said in a news release.

Officials estimate other travelers could have been exposed between 10 a.m. and 12:30 p.m. in the arrivals area, and between 7 p.m. and 10:40 p.m. in the departures section.

Last month, authorities said a passenger who had a layover at LAX on Feb. 21 and another person who arrived at the airport March 5 could have also put other travelers at risk.

Currently, there’s no known measles risk at the airport. But anyone who was at LAX during those time frames on April 5 could be at risk of developing the infection.

Another measles exposure has also been confirmed at the Long Beach Airport after one traveler diagnosed with the infection passed through twice, on March 30 and April 7, according to the Los Angeles Times.

The illness can spread when an infected person coughs or sneezes; respiratory droplets containing the live virus can remain in the air for two hours.

People who haven’t been vaccinated and those with weakened immune systems are at the highest risk.

Measles scares are likely to continue in the county, with California among six states currently experiencing an outbreak. The Golden State has a total of 23 cases reported this year, according to the Centers for Disease Control and Prevention.

As of Monday, 555 cases had been confirmed in 20 states — the second-highest number recorded in the nation since measles was eliminated in 2000, the agency said.

Symptoms include fever, cough, a runny nose and red eyes. A rash usually appears 10 to 21 days after exposure, according to public health officials.

Anyone who develops measles symptoms should contact their health care provider.

If you have not developed any symptoms by April 24, you are no longer considered at risk of developing measles from the April 3 exposure.