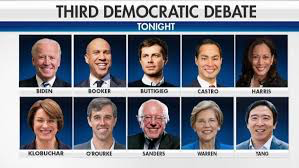 The third overall Democratic debate airs tonight, with 10 candidates taking the stage to show why they’d be best to take on President Trump in the general election. Unlike...
by Alycia Pascual-Pena September 12, 2019 206 Views

The third overall Democratic debate airs tonight, with 10 candidates taking the stage to show why they’d be best to take on President Trump in the general election. Unlike previous rounds of debates, which spanned two nights, Thursday’s event is one-night-only.

Here’s a look at what to expect tonight.

When and where is the debate?

How can I watch it?

On cable, the debate will air live nationally on ABC and Univision (with a Spanish translation), and locally in Houston on KTRK-TV.

Those taking part in the debate are (in alphabetical order):

So who is standing where? According to information sent by ABC in late August, the front-runners — Biden, Warren, and Sanders — will be clustered in the center.

What happened to the rest of the candidates?

In order to make the debate stage, those in the field of more than 20 candidates had to show at least 2 percent support in four qualifying polls and donations from at least 130,000 unique donors by a deadline in late August.

Among those who did not qualify: Marianne Williamson in August said she crossed the donor threshold to participate but did not receive the required support in polls.

An aggressive ad buy from Tom Steyer helped push him past the donor requirement, but he fell short by just one qualifying poll .

Prior to announcing just before the debate deadline that she would drop out, Senator Kirsten Gillibrand said she was close to receiving the required donors, but The New York Times reported that she needed three more polls.

Congresswoman Tulsi Gabbard has the required donors and received up to 3 percent support in several early state polls, but only in two approved by the DNC, her campaign said in August.

According to fivethirtyeight.com, the remaining members of the field did not hit 2 percent in any approved polls prior to the deadline, nor did they hit the donor threshold. Those include Senator Michael Bennet, Governor Steve Bullock, Mayor Bill de Blasio, former congressman John Delaney, and Congressman Tim Ryan.

What is the format?

What do recent national polls say about where the candidates stand?

Former vice president Joe Biden has held on to his lead among the crowded field of candidates, but he’s lost some ground recently to Senators Elizabeth Warren and Bernie Sanders in national polls. The rest of the field remains stuck in the single digits.

Another Warrant Has Been Issued Against R. Kelly It’s Another Sex Crime And No Show