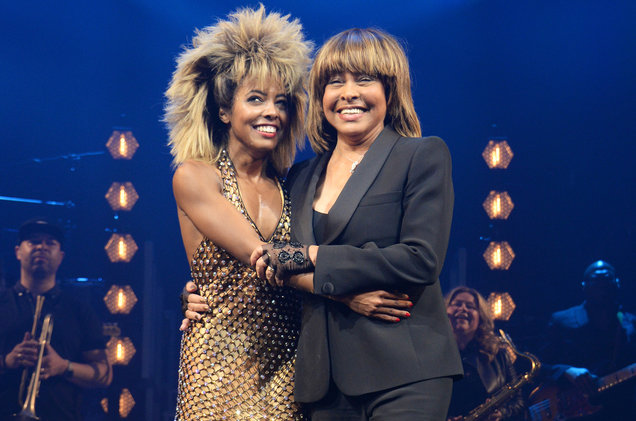 Tina – The Tina Turner Musical When she finally sat down with Tina Turner, the larger-than-life rock goddess she plays in the just opened Broadway musical, Adrienne Warren was taken...
by Zach Freeman October 18, 2019 527 Views

When she finally sat down with Tina Turner, the larger-than-life rock goddess she plays in the just opened Broadway musical, Adrienne Warren was taken aback by how much they had in common.

“Both of us are from the South — I’m from Virginia, she’s from Tennessee — both of us grew up tomboys. She was the captain of her basketball team, I was on the basketball team growing up and her dad’s a preacher, my dad’s a preacher,” says the 32-year-old singer-actress, ticking off the many parallels in their lives. All of which helped Warren imbue her performance with both authenticity and affection for one of the music biz’s greatest survivors.

Having previously performed in Bring It On — the loose stage adaptation of the hit cheerleading movie — and received a Tony nomination for featured actress in a musical for her role in Shuffle Along, Or the Making of the Musical Sensation of 1921 and All That Followed, Warren slipped into Turner’s famous shimmy in the West End in London in 2018 for Tina – The Tina Turner Musical and hasn’t looked back.

We chatted with Warren, who was nominated for an Olivier for her turn as Tina in the West End, from her New York rehearsal studio about portraying the formidable rock diva and how Turner made her sweat it out during previews.

ENTERTAINMENT WEEKLY: Congrats on the move across the pond. Has the show changed substantially since moving from London?
ADRIENNE WARREN: Yes. I think the show has changed significantly. We’ve gotten an opportunity to really dig more into the book. I think we’ve added a lot more depth to the story. It really does feel like a play with music now and we’ve added a song. It feels to me like a new show.

This is a big life to take on and part of that story is very traumatic, involving domestic violence. I’m curious about the work that you do with Daniel J. Watts, the actor who plays Ike Turner, to get that choreography right and to be able to walk away from rehearsals and the show feeling good about each other?
I’m really lucky in the sense that I’ve known Daniel for nearly 10 years and he’s like a big brother to me and has been in this industry, in this community and in this town for a while, so already we come into the rehearsal room with so much trust. The creative team often laugh at us because we’ll fight like brother and sister in rehearsal and we really, really know how to work with each other in that way. And so, for us, it really is about just making sure that each one of us feels safe in the scenes. We’ve had a lot of dinners and time outside of rehearsal and work where we’ve had discussions about both Ike and Tina. If he does his research and I’ve done mine, we’re able to come in with a lot of love and a lot of trust, which is the most crucial thing. I always know he’s never going to let me fall. He’s never going to let me hurt myself and he’s always going to be quote-unquote “there” with me.

I’m sure it goes in cycles, but what is your favorite song right now to sing in the show?
I didn’t always love it, but I’ve truly fallen in love with singing “We Don’t Need Another Hero.” I just think it is such a beautiful song. I love the way Tina performed it and it’s a very, very special moment in the show that I get to share with the entire cast.

How much time were you able to spend with Tina herself? And were you able to spend any of that time actually talking through the beats of her life?
Initially, I did as much research as I possibly could with her autobiographies and then I had the opportunity to sit down one on one with her a few times and make a list of any questions that I wanted to ask her about her life, about her career. And I really took that time and focused on her as a person, as a human being, as a woman. I asked very few questions actually about her performance and about her energy. We had a lot of similarities and I think that really helped me to tap into who she is as a woman, who she is as a mother, who she is as a sister, and I think that’s the person that the audience wants to learn about.

As the process was going along, since she was involved in the production, would she give you notes about your performance?
Tina was involved in a few of our rehearsals. So we were very lucky to have her there and help me with my choreography. The next time she came was our first or second preview [in London], I think. She came backstage and she was giving everybody love and compliments. And she didn’t say anything to me and I thought that I failed her and she hadn’t approved my performance yet. And I went back to my dressing room and sobbed my eyes out. I was like, “I’ve worked so hard, I changed my entire body, I changed my voice, she’s not proud of me. She hasn’t approved this yet. What else do I have to do?”

I didn’t hear from her for a few days. And then on Easter Sunday, [laughs], I happened to be at my director’s house and she called and said, “All right Adrienne, I’m ready to talk now.” And in that conversation, she approved my performance. She wasn’t able to speak to me face to face when she saw it because she wasn’t ready yet. And she said some things I will never forget that I will keep near and dear to my heart.

But in that moment she was also able to help me on things that she thought I could improve. She sat me down and she taught me how to do Buddhist chanting over the phone, which is very, very crucial to the story. She taught me about her stance, the way in which she holds her posture when she performs. She asked me, “Adrienne why do you think I stand that way?” And I said, “I don’t know. I thought it was just the way you stand. It’s your power stance, it’s your ‘I am woman hear me roar!’” And she said, “No, I stood that way because I couldn’t hit the note.” And all of a sudden I went, “Oh, so there is a specific reason for every single thing she does” and it is important that I know that. And now I’ve learned how to anchor down and use that stance as a way for me to sing my notes as well. And so just little key things here and there that she wanted to give me a little more insight, which was unbelievably helpful in polishing some of those nuances that are really crucial in playing Tina because she is so unbelievably different from me when it comes to performance style.

What an agonizing few days that must’ve been!
[Laughs] I was pulling my hair out and calling my mom like, “I can’t do this, I’ve tried giving everything. I can’t.” There’s nothing like actually hearing [Tina] say, “This is yours now and I want you to do this.” She told me, “You have something that I didn’t have and I want you to hold on to that.” So she gave me permission to put myself into the work. Which is what I think I needed to hear.

While this is obviously different, have you gotten any feedback from Angela Bassett, who played Tina in What’s Love Got to Do With It?
She actually came to London! She flew in just to see the show and I got to hug her and thank her just for everything that she’s done for the community and as a black woman. She’s a queen and I actually got to talk to her a bit about the experience on the film. And she actually didn’t get an opportunity to work as closely with Tina on the film as Tina is working on this but it was still that same daunting feeling of, “Oh my gosh, this is a titan of a character to play.” It requires every bit of you, almost every second of the day. Whether that’s taking care of yourself, training, going to vocal lessons every week, doing pushups between everything, whether it’s watching movies. I mean, I’m still doing those things and I’ve played this role for over a year now.

That kind of dedication implies that you must still be enjoying it. Was it crucial to you that you make tweaks in the transfer to Broadway, to keep it fresh?
Yes and also we have another shot at it, let’s just make this as good as we can possibly make it. And I think the more that all of us began to spend time with Tina and learned more about her, the more we started to care for her as a woman that we know and love. And I think when you start really caring, that’s when you become that emotionally invested in your work. I care so deeply about this piece… because I care so deeply about this woman. And this is her legacy, and she has given us her torch, so let’s do it right because she deserves that.