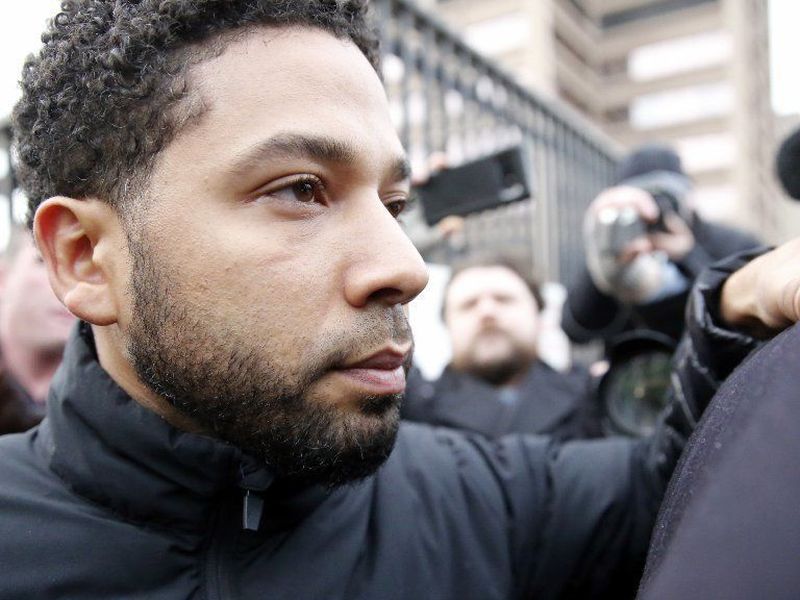 After weeks of confusion surrounding “Empire” actor Jussie Smollett’s claim that he was attacked by two men in Chicago, the Cook County State’s Attorney’s office confirmed to Fox News that it would not be prosecuting the...
by Katricia Brown March 26, 2019 285 Views

After weeks of confusion surrounding “Empire” actor Jussie Smollett’s claim that he was attacked by two men in Chicago, the Cook County State’s Attorney’s office confirmed to Fox News that it would not be prosecuting the star.

Chicago police initially investigated the late January incident as a possible hate crime, noting Smollett told them the suspects yelled racial and homophobic slurs during the alleged attack. Celebrities began sounding off on social media to denounce the disgusting reported assault. But the case took a dramatic turn when police said new information had significantly “shifted” their investigation. 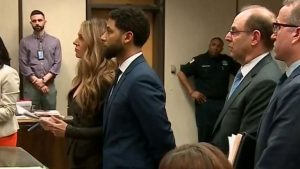 Smollett was indicted on 16 felony counts in connection to his Chicago attack allegations in early March. He pleaded not guilty.

Now the case has essentially been dropped. Here’s a look at some key moments in the story.

The Cook County State’s Attorney’s office confirms to Fox News that it will not be prosecuting Smollett — with a judge granting a nolle pros.

Smollett pleads not guilty on 16 charges stemming from an alleged hate crime hoax during an appearance in front of Chicago Judge Steven Watkins.

Smollett’s character is removed from the final two episodes of the upcoming season of Fox’s “Empire,” the show’s executives confirm.

Smollett reportedly turns himself into police. He is placed under arrest and is in the “custody of detectives” the morning after felony criminal charges are approved against him, police say. A judge sets $100,000 bond later that day.

The actor posts bail and returns to the Chicago set of “Empire.”

“We are told what he needs to do to avert a grand jury is literally a ‘Hail Mary’ where somehow he says something that will make the police believe it,” Levin says on “America’s Newsroom.” “It’s just not going to happen.”

Levin claims the grand jury is deciding whether to charge Smollett with a felony for filing a false police report.

At night, news breaks that authorities approved felony criminal charges against Smollett — hours after he’s “officially classified as a suspect in a criminal investigation” for allegedly “filing a false police report” in connection with his Jan. 29 attack claims, police said. 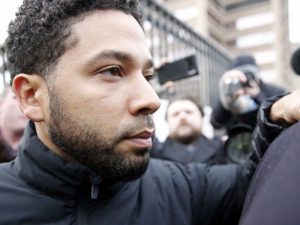 Chicago police say they will investigate a tip that on the night Smollett reported being attacked, he was in an elevator of his apartment building with the two Nigerian brothers. Police later dismiss the tip, saying it’s not credible based on video evidence.

Chicago’s top prosecutor, Cook County State’s Attorney Kim Foxx, recuses herself from the investigation. Her office said the decision was made “out of an abundance of caution … to address potential questions of impartiality based upon familiarity with potential witnesses in the case.” No details were provided.

Celebrities including Cardi B, Ava DuVernay and Alyssa Milano, among others, are issuing new statements about the incident after initially supporting Smollett.

Chicago police say they’re still seeking a follow-up interview with Smollett after receiving new information that “shifted” their investigation of a reported attack on the “Empire” actor. Chicago police spokesman Anthony Guglielmi says police reached out to Smollett’s attorney but says an interview has not been conducted.

“While we are not in a position to confirm, deny or comment on the validity of what’s been unofficially released, there are some developments in this investigation and detectives have some follow-ups to complete which include speaking to the individual who reported the incident,” Guglielmi tweets.

Guglielmi declines to address reports that a grand jury may hear evidence in the case. “We’re not confirming, denying or commenting on anything until we can talk to him and we can corroborate some information that we’ve gotten,” he says.

Police say the “trajectory of the investigation” has “shifted” after detectives question the two brothers about the attack and release them without charges. Police say they’ve requested a follow-up interview with Smollett.

Smollett’s lawyers say the actor feels “victimized” by reports that he played a role in the assault.

“As a victim of a hate crime who has cooperated with the police investigation, Jussie Smollett is angered and devastated by recent reports that the perpetrators are individuals he is familiar with. He has now been further victimized by claims attributed to these alleged perpetrators that Jussie played a role in his own attack. Nothing is further from the truth and anyone claiming otherwise is lying,” Smollett’s attorneys, Todd S. Pugh and Victor P. Henderson, say in a statement.

Smollett’s account of what happened is met with some skepticism on social media in the wake of the new developments. 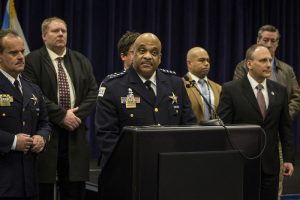 Guglielmi says the two “persons of interest” are now considered suspects. He says the men — identified previously by police as two brothers from Nigeria — are in custody but have not been charged with a crime. A search warrant is executed at the Chicago apartment where the men live.

Chicago police release the two men without charges after arresting them on suspicion of assaulting Smollett and holding them for nearly 48 hours. A police spokesman says the two are no longer considered suspects and that investigators have new evidence to consider as a result of questioning them.

“Multiple sources have told ABC7 Eyewitness News that police are investigating whether Smollett and the two men staged the attack allegedly because Smollett was being written off of ‘Empire,’” WLS-TV reports.

Chicago police say local media reports that the attack against Smollett was a hoax are “unconfirmed by case detectives.”

Guglielmi says the department contacted the news station “to state on the record that we have no evidence to support their reporting and their supposed CPD sources are uninformed and inaccurate.”

Producers of “Empire” also dispute media reports that Smollett’s character, Jamal Lyon, was being written off the show.

“The idea that Jussie Smollett has been, or would be, written off of EMPIRE is patently ridiculous,” 20th Century Fox Television, which produces “Empire,” and Fox Entertainment says in a joint statement. “He remains a core player on this very successful series and we continue to stand behind him.” 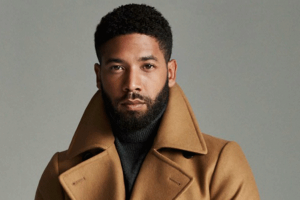 Chicago police pick up two men they identify as Nigerian brothers at Chicago’s O’Hare International Airport on their return from Nigeria after police learn at least one worked on “Empire.” Police question the brothers and search the apartment where the men live.

Chicago police say Smollett turned over some, but not all, of the phone records detectives requested as part of their investigation. Police say the heavily redacted files aren’t sufficient. Smollett says he redacted information to protect the privacy of contacts and people not relevant to the attack.

Smollett gives a concert in West Hollywood, California, opening with an emotional speech in which he says he had to play because he couldn’t let his attackers win.

“The hateful rhetoric has to stop and it stops when you believe in love. Sometimes — and I’m guilty of it, too — we who celebrate love can actually get wrapped up in so much hate. We cannot let that happen. If that does, we are destined to fail to even exist. That’s not an option. Take love back. We have to take it back because it was ours to begin with,” Smollett says to a roaring crowd at the event, according to Hollywood Reporter.

Smollett speaks out for the first time following the attack to let concerned fans that he’s “OK.”

“Let me start by saying that I’m OK,” Smollett tells Fox News. “My body is strong but my soul is stronger. More importantly, I want to say thank you. The outpouring of love and support from my village has meant more than I will ever be able to truly put into words.”

The actor stresses he’s been “100% factual and consistent on every level” with Chicago police.

“Despite my frustrations and deep concern with certain inaccuracies and misrepresentations that have been spread, I still believe that justice will be served,” he adds.

President Trump tells reporters at the White House that he saw a story the night before about Smollett, saying, “It doesn’t get worse, as far as I’m concerned.”

In a statement, Smollett’s family says the actor “has told the police everything” and “his story has never changed,” disputing some social media users claims he had been less than cooperative and changed his story.

“We want to be clear, this was a racial and homophobic hate crime. Jussie has told the police everything from the very beginning. His story has never changed, and we are hopeful they will find these men and bring them to justice,” the statement read.

“We are so grateful that God saw him through this cowardly attack alive. Jussie is a warrior whose light cannot be dimmed. We want people to understand these targeted hate crimes are happening to our sisters, brothers and our gender non-conforming siblings, many who reside within the intersection of multiple identities, on a monthly, weekly, and sometimes even daily basis all across our country,” Smollett’s family continued, in part.

Chicago police say they’ve reviewed hundreds of hours of surveillance camera footage, including of Smollett walking downtown, but none shows the attack. Police release imagesof two “people of interest” they would like to question.

“While video does not capture an encounter, detectives are taking this development seriously & wish to question individuals as more cameras are being reviewed,” Guglielmi writes on Twitter.

Smollett is hospitalized after allegedly being beaten by two men in Chicago. He tells police he was walking downtown to grab Subway at 2 a.m. when two unidentified men yelled “racial and homophobic slurs.”

The actor says the men wrapped a rope around his neck and poured an “unknown substance” on him. Police say Smollett, who is black and gay, tells detectives the attackers also yelled, “This is MAGA country,” an apparent reference to President Trump’s campaign slogan.

“Given the severity of the allegations, we are taking this investigation very seriously and treating it as a possible hate crime,” Chicago Police say in a statement. “Detectives are currently working to gather video, identify potential witnesses and establish an investigative timeline.”

Two Choices For Parents In College Admissions Scandal….Cooperate or Fight