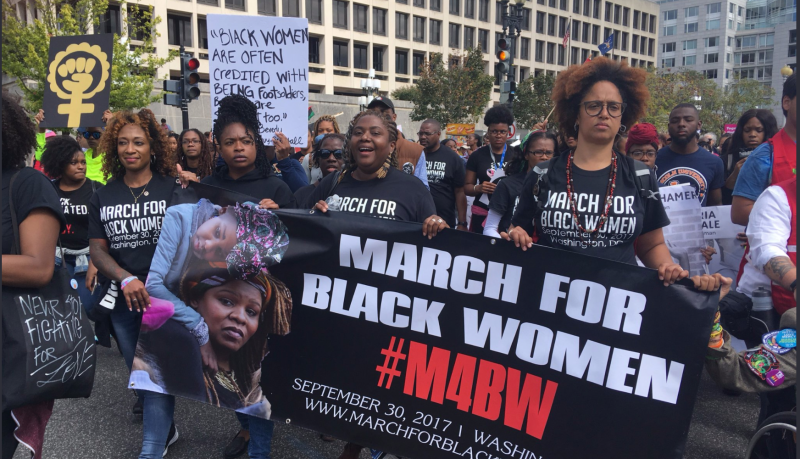 Makenna and Brianna with awesome signs at the March for Black Women #MarchForBlackWomen #M4RJ pic.twitter.com/EL4GNLGfAj

Although there was in fact a March for Racial Justice on Saturday in Washington, D.C., there was also a rally specifically for, about and led by black women, the March for Black Women, sponsored by the Black Women’s Blueprint, Black Youth Project 100 and Trans Sisters of Color Project.

The March for Black Women held a morning rally of black women and allies before joining the racial justice protesters. Women linked arms as speakers recited the names of black female victims of violence, punctuated by a chant of “Say her name!” according to the New York Times.

The two separate rallies then converged in Lincoln Park on Capitol Hill, where the cohorts marched to Justice Department and then the National Mall. Over the weekend, more than 15 related marches for racial justice were scheduled to take place around the country, reports the Times.

There’s another social justice march this weekend, and black women are refusing to be left behind.…

As previously reported by The Root, there was no competition between the two marches in D.C., but organizers of the black women’s march were adamant that black women’s and girls issues be addressed.

“It’s difficult getting the issues specific to black women and girls centered within the racial-justice movement of this nation,” said Farah Tanis, the co-founder and co-executive director of the Black Women’s Blueprint to The Root.

“Also, 50 to 60 percent are black girls are sexually assaulted, but people have a hard time believing this even though they know historically, we have endured rape and have been enforced to endure generations of rape,” she continued. “Black kids are born to poor black mothers. How do you not see that as a racial-justice issue?”

The March for Black Women celebrated the 20th anniversary of the 1997 Million Woman March, in Philadelphia. It also chose to set itself apart from the Women’s March on Washington in January because again, black women’s needs are specific in terms of both race and gender.

“Look around, look at the ways you black women show up to a march,” Michaela angela Davis, said from the rally stage. “Braids, Afro-[puffs] — y’all can’t fit that under a pink hat.”

“This isn’t new — it’s always been relevant,” said Sade Moonsammy to the Times. “We aren’t asking for anything that our parents haven’t already asked for. We’re still in the fight.”

HOUSTON: More Than 60,000 People Are Still Living in Hotels 1 Month After Hurricane Harvey