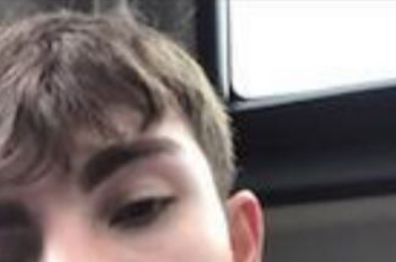 THIS is the chilling selfie of a dumped teen after he stabbed his ex-girlfriend to death before staging the murder to look like she had killed herself. Thomas Griffiths,...
by Raquel Jayson November 8, 2019 206 Views

THIS is the chilling selfie of a dumped teen after he stabbed his ex-girlfriend to death before staging the murder to look like she had killed herself.

Thomas Griffiths, 18, knifed Ellie Gould at least 13 times in her family home – with the 17-year-old girl found in a “pool of blood” by her horrified dad hours later.

Sobbing Griffiths was today jailed for a minimum of 12 years and 6 months after admitting he killed the teen girl – telling the court he was “so sorry”.

Richard Smith QC said the teen had snapped when Ellie rejected his appeals to get back together after she dumped him to concentrate on her study.

Chillingly, he tried to cover up the crime – putting his ex’s hand on the knife to make it look like she had killed herself.

The jilted teen then texted friends claiming he had been “scratching” himself due to the stress he was under with family and exams to explain injuries he had received as she desperately tried to fight back.

It wasn’t until 3pm that Ellie was found “face down in a pool of blood, with the knife in her neck” by her horrified dad Matthew Gould.

In a victim personal statement, Mr Gould said: “The image of Ellie lying there on the floor has haunted me ever since that afternoon.

Griffiths had initially claimed he had been revising with Ellie on the fateful day of May 3 but Mr Smith told Bristol Crown Court no folders had been at the in Calne, Wiltshire, home when she was found.

Instead, Griffiths was blasted for carrying out the “most appalling attack” before trying to cover it up.

Police said Griffiths had been taken to school by his mum that day but instead of going to class, he was caught on CCTV getting a bus to Derry Hill before driving the family car, despite not having a licence, to Ellie’s house.

Sharing a selfie after the murder, he told friends he was “so stressed”, saying: “I think everyone’s noticed that I’ve been really down lately and I need to tell you why.

“Me and Ellie are going to go on a break and see how things go after exams.

“As well as this, my Dad has cancer and my Nan has been in hospital having heart problems.

“I’ve been so stressed lately and I don’t know how to cope with it.

“I’ve been scratching myself around my neck area and as this group has kind of become my best friends I don’t know who else to talk to.”

After killing Ellie, he then drove back home – walking to a wooded area nearby and disposing of a number of items he had used to clear up at Ellie’s home. He then went back to school.

Ellie, an A-Level student at Hardenhuish School in Chippenham, was found stabbed in the neck with a knife taken from her family’s kitchen about 3.15pm.

SHE TRIED TO FIGHT BACK

Wiltshire Police arrested Griffiths, who was 17 at the time of the attack, a short time later.

Mr Justice Garnham slammed Griffiths as he sentenced him.

He said: “She tried desperately to fight back, scratching at your neck in the process. You did not have the sense, or the decency, to stop. Instead, you picked up a kitchen knife.

“You then carried out the most appalling attack on this defenceless girl, repeatedly stabbing her to the face and neck.

“The pain and terror she must have suffered in her last moments, as your frenzied knife attack continued, is beyond imagining.

“Not able to face up to what you had done, you then attempted to cover up this dreadful crime.

“First, and most chillingly, you left Ellie on the floor with the knife embedded in her throat and her left hand around the handle of the knife.

“I have no doubt that you arranged the scene in order that it would appear to those who found Ellie that she had been killed, not by another person, but instead by her own hand or in some terrible accident.”